Basis of getting banned?

What are the reasons of getting people banned? Other than the obvious reasons such as editing eternal items, maybe there are other reasons. I hope to know those reasons so that we can avoid them.

What are the forms of cheating?

Like using a rooted phone with hacktool to editing recources?

im sorry but I’m also wondering why when a new player get a rank1. they’re will be vanish tommorow?

How come non cheaters get banned then? Maybe there are things we don’t know that may trigger their system to flag accounts.

Yeah their system is so so so dumb, cant really identified who is who. i got banned for the unknown reason… Why? because i upload and download? I got a new phone, that is why… But devs fix it…

How about mine???im not a pvp type player.,just a LF hikers but got banned.,and until now its in the banned league for using upload progress(though auto flag sytem says i use ul/dl too often with close time interval.,)and i highly denied.,im against game cheating and even that long time ul/dl loophole back to the time where it has no limits.,i dindt even abuse it.and vsit pdq group page if how many cheaters we did kicked butt there.,from almost 3k member are now only 1.5 and on going.

There is something wrong with the system or the ego of dev.

@Mr_Scooty @tdaniel May we ask for your help? We would to know the other reasons of flagging accounts. Maybe we’ve done something that we didn’t know that’s illegal. We would like to avoid them so that we can enjoy the game even more.

@Mr_Scooty @tdaniel. Can you explain this. I’ve waited for this for a long time. 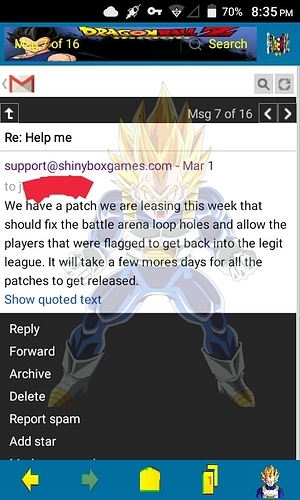 Actually, using backup tools to restore game data such TitaniumBackup, uploading-downloading to get better rolls on items, closing the game after using Obsidian crystal and having a client that isn’t registered in play store e.g.installed via .apk (this one is instaban when you connect with internet) are forms of “soft” cheat that can also lead you a ban. This is because mods are not only aware about eternals, but about perfect rolls too.

@luisfsk Thanks for the info. I just wish that i learned those information even before starting the game. But for the download/upload thing, there’s a 3 hour interval that the devs created. that should’ve fixed the issue. Those are loopholes that the devs created, why put the blame to the players who knows how to use those loopholes?

Yup im using that too.,if i dnt want the cyan affix i close the game wasting my obsidian crystals rather than the whole items(specially with rare legend affix)it self.or do you mean closing game then using ul/dl @luisfsk?

Yeah, I explained that to you in several follow up messages as well. I was up front with you that I could not “guarantee” your account would be restored. The word that stands out to me in the message you chose to show above is “should”. Some accounts were moved back into the regular league after a patch was released that addressed several battle arena exploits. Not all of them were moved back.

“Every player” is not doing this, closing this topic because you all have answered the the question that was posed by it.