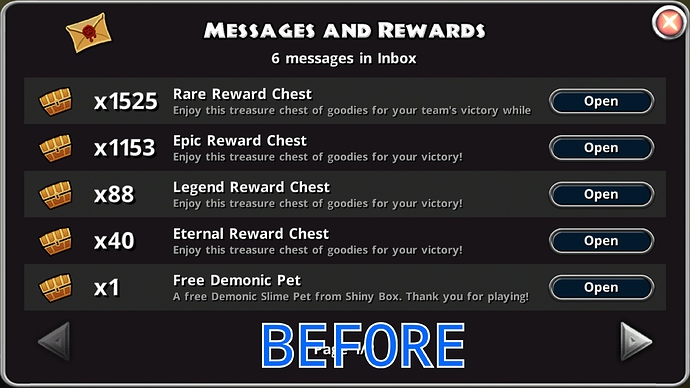 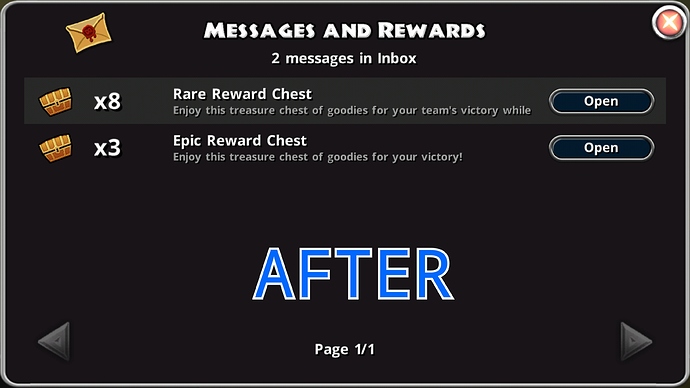 Can u fix this? I didnt get my rewards. But idont know how it is gone ?

Idont know what happen to DQ . Please fix some errors if ever. Thanks.

To do a restore on any Account information including characters, items, IAP, or anything else, please follow these steps: Email us at support@shinyboxgames.com Provide us with your DQ Account email ( we don't assume your forum account is the same as your DQ Account, and we would like to avoid you posting emails on the forums ) Provide us with as much information about your account and what's missing. This will help reduce the amount of questions we need to ask! Wait until we contact you bac…

the chests I will look into on my end, the MMR changes look normal I think. It looks like you won 3 matches and lost 3 matches. I could be missing something here?

Idont play arena. Then i got 3loss

If you are getting reward chests your character must be winning offline battles (ie other players fighting your AI). I am not 100% sure if that effects losses, it should effect mmr. I will ask steiger for clarification.

Lmao too much arena xD

Ikr. I did so much arena as well but yeah.

Good luck! I’m sure you’ll understand the AR and resist formula xD. The codex is correct when it comes to those.
Knowing you, I think you’ll make a unique but good arena build. Semi immortals are far deadlier anyway.

Lmao ill do my best not to disappoint u xD

I’m sure you won’t. Do ask me for questions and other people who you think are great if you are unsure. Also read carefully between the lines like you would and you’ll be great. You already do well thought out builds so you’ll do awesome. That theorycraft shows brain power.

Also sometimes trial and error can make original visions and goals better than they are.

I will. I hope someday i can mame a really original build that i can be most proud of hahahaha awesome!

You will. Tbh my original builds are not super original but based on cronos builds and what I’ve been taught but my testing and stuff did help it become unique. Technically some ideas are already common but you can still make unique builds with common ideas and thoughts.

. Sometimes even the simplest ideas don’t get used . My example being the rogue discordance orb. Maybe people thought of it or used it but never posted. Good luck on being the very best

Even I still have a bit to learn as well. I almost quit but I’m glad I kept coming back for you guys and mainly myself as well since I still have some things left to learn or master.

Amazing hahahah u truly are a great guy!

Right now I’m working on a pierce build with wizard skill and using the difficult alchemy mythic along with it . I forgot to work on it for a while but I’m glad tons of farming makes me afford anything.

I’m also thinking about how I can make a proper rogue farm build that is unique or not widely used and possibly a 2v2 character idea for a build .

I have the ideas and sometimes resources but I just need that motivation and time lol.