What’s the best warrior build for high floor, i use a variant of redrum build with OH fire element.
Is this the best choice?

if you just farming, my build in warrior is poison element it’s good for mob… Plagued gives you HP and Armor plus Druidic gives Poison dMG defending on HP & MP regen, its also gives you regen… Plus Battle Mage set for additional HP & Armor to about being “One Hit” in highest floor… then Put atleast one Perseverance Affixes…

I use a toss build with 360 bleed damage, hatchet fire element And other item shock for have elemental critical on bleed, at the moment i one shot cartografer But Im 550 floor

that bleed will not do on floor 1k what is your max crit / Deadly?>

150M-200M, too low for me respect green garden build.
If you want show My build 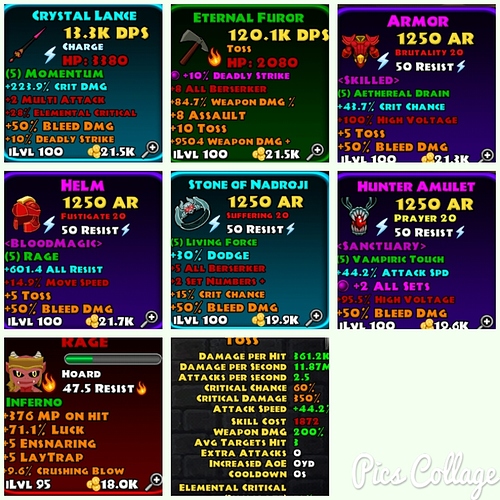 Adventurer will be good, you get good synergy with momentum.

Multi Attack has nothing to do with High Voltage. The moment a monster is stunned, all of your attacks will get boosted by High Voltage. Also Charge is one of those skills that gets a DPS increase instead of multiple attack (the others are Specials with Discordance and Chakrams).

I have change multi attack with highvoltage And change 1 bonus bleed damage with sprint proc.
More better Now.
Thanks @Clogon

No problem. I am glad you are understanding the game a bit more. There can still be room to improve your build but I will let you figure it out as the rest of the are not as complex as High Voltage, Multi Attack and Sprint Proc+Momentum.

Maybe the affix that you removed to come back to 6 Multi was making you have less DMG? Anyway… Multi attack is a chance or it’s 100%? Mean, it’ll aways do +4 attacks extra? Cause if it’s just a chance, even the cap being 4, when you have 6 you’ll have more chances of doing the 4 attacks (doesn’t mean that you would be doing 6). Like if you have meteor proc at 10%, procs 1 meteor, with 20% u’ll proc more times, but still 1 meteor… Don’t know if i’m making myself clear (not an english speaker).

It says in the description that it gives plus 2 multi attack for 50% damage. The affix that i replaced with multi attack was ED. Forgot to take a screenshot of it. I was just confused because the cap is 4, so i thought that making it 6 will not increase my damage, but to my surprise it did increase my damage therefore leaving me confused about the cap. Btw, the reason that i had 6 multi attack is because, that’s the only useful affix that i can pick that time. So instead of crap affixes such as affixes for summons, immunities and others that i dont remeber, i chose multi attack over those crap affixes.

The DPS calculation in the GUI is buggy.