Hi I was wondering how bleed damage works in this game, it does seem like it depends on the initial hit that triggers the bleed effect, but how exactly is the damage calculated? Because my bleed damage hits so high that it seems like it’s bugged.

Oh I forgot to mention I was playing with enemy power 8, floor 87

60M damage with that build? Are these numbers got from bleeding?
If yes it might be a bug indeed, or maybe Steiger raised bleeding dmg to hell, to make bleeding interresting (because at highest floors you’re hitting way too hard so you can’t really apply some dots/bleeding to ennemies, because they are dying kinda fast)

Ikr, at lvl 63 I couldn’t possibly do that much damage

Yeah those are actually bleed ticks

Where did you find this hat ;(

I must be playing this game wrong…I clear floors easy but my highest dps ever was 550k and I only do 400k with meteor…my comets do 30k each…60mill?! Wtf

Looks like we’ll have to check out Bleed DMG

I’ll pull down your account and check it out.

Okay I just uploaded my latest save data to server

could it be the head piece? If I remembered correctly this started after I got that.

Just done a couple of test runs, it seems like the bleed dmg skyrockets after I free up bag spaces by selling unwanted items

Wow, that was a tough bug to find, but I know what’s causing it now.

It was definitely a bug in bleed, and has to do with the bleed dmg+ affix on your bomb. You likely started noticing it with your hat because that’s an amazing hat. You seriously lucked out on it!

Fix will be in the next released patch ( not sure when ).

@cbbflfjz where did you find this hat answer me…

[quote=“BunnyFuffu”]@cbbflfjz where did you find this hat answer me…

RoyalFairy , Rogue Level XX[/quote]
It is a (normal) legendary drop with a crystal affix on it. You just continue doing floors and if you are lucky enough, one of these will drop eventually (rare!).

[quote=“cbbflfjz”]could it be the head piece? If I remembered correctly this started after I got that. 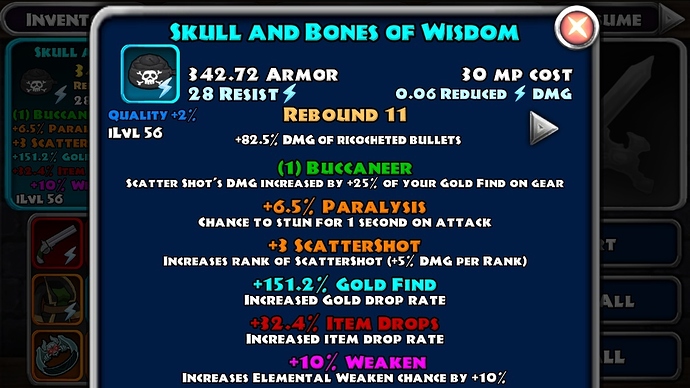