So firstly, the aim was to build on (pun intended) Dieter’s previous version Scattershot build, using the most
recent cap restrictions and affixes.
Credit to saikm for confirming the cap on Gold Find on gear was 650%.

The goal was to get as much damage from the Scattershot as possible while keeping most other areas respectably high.

So firstly the damage shots:

And of course, the build required

So that left one set affix.

Deadly Arts was the obvious choice as Deadly Strike would be maxed, granting Cooldown Reduction of 60% (for Scattershot)

To the legendary affixes!

So the weapon is as you see it.

The build required two +5 Scattershots to max it at level 40.
A single +50% Gold find to get to 650%
Lastly I needed 3 x +5000 HP to have a respectable HP total.
The remaining epics were +Ice Damage or +Ice Damage %
(For those of you wondering, 20% Ice damage is more damage than another +5000HP converted to damage via Golden Veins)

I used a legendary pet with Permafrost and HP Leech.

It doesn’t really matter which pet, just take which ever one has one of the sets and the
most useful affixes. I recommend damage, health, Leech and anything you find useful.

One important thing is the Leech, you need some, if the pet doesn’t have some, swap out one of the epic affixes’ on your gear.
(With this kind of damage, one affix is enough, even leech nerf won’t worry you)

The same goes for talents, they don’t really make much difference to this build, Scattershot does all the work.
Bleeding is a good example, it assumes the enemy will survive your Scattershot in the first place. WRONG!

So to sum up this build has:

A couple of points for those who are still reading

A fantastic build, many cudos to you sir

1 affix slot is really a big loss and can make a big difference though :I

1 affix slot is really a big loss and can make a big difference though :I[/quote]

newb_player,
Good thinking, however the way the affixes are calculated with the set bonuses means that
Gold Find added by the nature of items (eg ‘Of Greed’) doesn’t get added in the same manner.

So it’s a tradeoff, even though the stats page, still says 650% Gold Find.

doesn’t nature of the item included on the gold find calculation on the gear? :I

Can someone let me know how come his weapon is in BLUE color?
I’m on lvl 90 and my weapon still in red display.

[quote=“Calv1n”]Can someone let me know how come his weapon is in BLUE color?
I’m on lvl 90 and my weapon still in red display.[/quote]

I’m currently using rouge right now. What her best weapon gun or bow and what her best secondary weapon?

I’m currently using rouge right now. What her best weapon gun or bow and what her best secondary weapon?

It depends, you can make a solid case (and there are builds on here) for any primary weapon other than the daggers. Secondary choices are usually dependant upon your primary weapon play style, but the popular skills seem to be Stealth for survival, or Mirror Image for dmg output.

Seems like Scattershot is very used, just saw about 3 topics from 3 differents players for this playstyle, nice!

Well explained, the only missing thing would be a video, but even without it we can make our idea of your power, great

(PS : Thanks for the credit!

Is 5000 weapon damage max cap? That what I got up to.
Can someone tell me some of the cap damage in this game.

[quote=“Calv1n”]Is 5000 weapon damage max cap? That what I got up to.
Can someone tell me some of the cap damage in this game.[/quote]
5000 is the maximum value for weapon damage affix.
We don’t have damage cap!

Is 15% attack speed is max? Also is does weapon nature depend on the affix you get? For example: Blessed, Wisdom, and Strength.

newbie question, how or where to find shakram of strenght?

All gears have Natures in them that grants works the same way affix does. 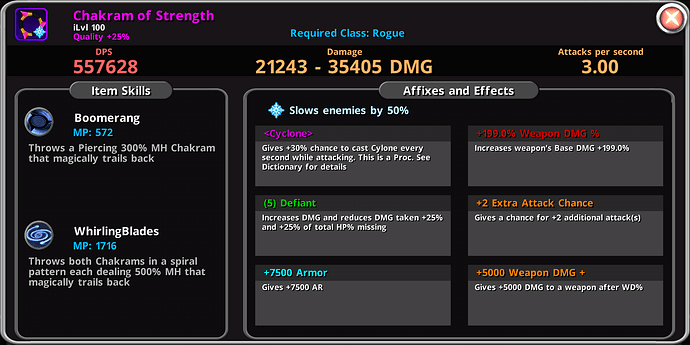 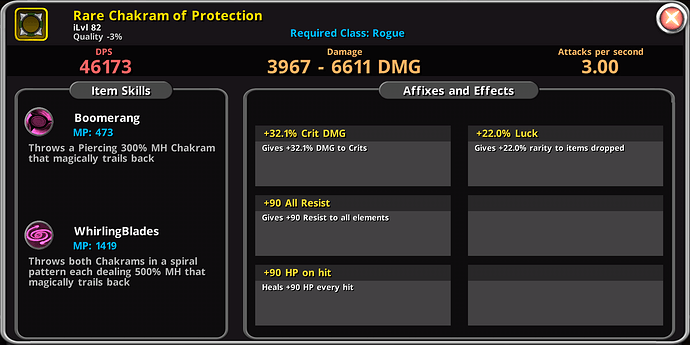 On legends, only its Unique name only exist and Nature. 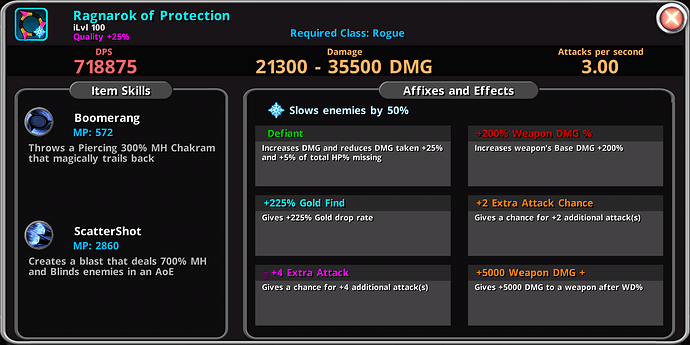 Edit: I didnt get to explain where to get it in my post, didnt I?

Use a Crystal Stone named Beryl on a gear and it will prompt you to choose what nature you want to put in your gear. Check Codex > Dictionary > Nature to learn more about each natures.

tnx alot man, i really like that mythic shakram of strenght would u mind teaching me how to craft that thing? hihi

Warning: Make sure you have MORE THAN ENOUGH of the resources that ill discuss before performing this guide. Also do the guide strictly as poasible and dont skip on instructions. You might want to save your account into the cloud as a precaution.

Get Ragnarok(Rogue) as Base Weapon.
Use Emerald to increase gear Quality it to 25%. Important for MinMax rolls.
Use Peridot to increase Gear Level to 100. Also important for MinMax rolls.
Use Kyanite to make space by removing affixes EXCEPT Legend Weapon Dmg and Defiant. They cant be reobtained by any means once removed.
Use Zircon to add 4 Socket into Ragnarok.
Use a combination of Mythstones to add a mythic affix(Purple) into your Ragnarok.
Cyclone Recipe: Hero + Boon + Haste + Flight
Use Diamond on Ragnarok to attempt to max the roll of Legend Weapon Damage to +200%(+199% - +195% are also acceptable).
Use Topaz to get +5000 Weapon Damage and +2 EAC.
If the Weapon Damage is not max rolled, use Flourite to manually roll them each until max/near max is achieved.

The 6th affix is where the Crystal Affix will be added(like set affix, only one crystal affix is allowed). Before you do this research first what relevant affix you should look for. Only a certain number of Crystal affixes are available and once you put one(Crystal affix) on a gear, youll have a very very hard time removing it with crystal stones.
Check this site: https://dungeonquest.fandom.com/wiki/Crystal_Affixes

One more note is that if you have a Crit Chance affix for example in your gear and you have used Obsidian into it, you’ll never get the option to get its Crystal affix.

Tip: Often youll get crappy choices with Obsidian(Usually affixes you dont want like Reduced cost, Mp Leech, etc.), in that scenario, do not choose any options and force close the game. Doing this action still consumes the Obsidian but what matters is that your gear doesnt have any Crappy Crystal affix into it. Repeat the process until the affix of choice appears.

Hope this helps you.

this is gonna help me alot start farming now for ragnarok hihihi, tnx a lot man

Check Dust unlock/craft requirements first before proceeding. If dust is insufficient to unlock/craft then do not proceed.