In the arena:
HP: 5,720
Power: 269
The DMG Prevented value is also pretty high generally… This is probably due to Equivalence reducing the damage I take by a good amount.

How much does it cost to make this build? At a minimum, it takes about:

Some of the above items are relatively common, others are on the rarer side; however, I feel that gathering the materials required for this build is not a super daunting task even if you don’t play the game aggressively (like some people here). Of the above, the following crystals/mythostones are considered vital to the build:

Some Notes About the Build
First of all, I want to go ahead and say that this is by no means an end-game build. Heck, I think it isn’t quite a mid-game build either. I mean, sure, it does require a good amount of crafting to achieve, but it is nothing that is really impossible. (For the record, the Elixir Mythostone isn’t really that rare; I’ve had at least two drop after I started playing again, which was quite recently.) Furthermore, it is an evolving build. I started out with just the affixes on the Legend items, and as I progressed and gained more supplies, I made changes to the build. In other words, you don’t need everything to get the build to work decent; I was doing fine even without the <Arc> and <Equivalence> mythics for instance. I also didn’t have the legend pet until very recently (not to mention I consider the set affix not very useful). I added the Ascendent set early on to the Chakram, and I am sure it helps out some, but I bet you could get by reasonably well without the set. The most important things I want you to understand about this build are that 1) it’s achievable by almost anyone (especially if they are playing Rogue) and 2) it works good for my purposes; however, it is nowhere close to being a top-tier build.

Now, what was the #1 design goal for my build? Versatility, fun, and cheapness. It is versatile in that it is effective at the lower floors and EPs in PvE, and it does pretty well in the Arena as well. (Though, it almost certainly won’t get you to eternal league, and I am not sure if I can even make it to Mythic league with it. It is still one of the better builds in the earlier leagues in the arena.) Another way it is versatile is that it also serves as my experience gaining build, and I believe it to be pretty effective in terms of that. I think I already showed how it is more or less pretty cheap to make. As far as fun to go, I don’t know about you, but I love the KnightsCharge skill. It’s fast, it’s spammable, AND it’s powerful. Seriously, it works great as long as your damage output is around or exceeds the health of your enemies.

Speaking of skills, I just want to say that I think the skill set works well in the arena. My go-to skill in the arena is KnightsCharge because it is easy to use and tends to kill pretty fast, but there are some enemies where it is impossible (read: excessive knockback like Guantlets) or very impractical (again: excessive knockback and high damage skills like storm… why does storm knockback anyway; I don’t remember it ever doing that in the past…). In those cases, I try to use Boomerang as I can throw it slightly farther than the area I can cover with KnightsCharge. (Though honestly, I wish Boomerang’s range was slightly longer: guantlets have about the same range (a little smaller), but there is that annoying innate infinite-knockback effect…) Boomerang deals around the same damage (actually, probably more) as KnightsCharge, but it is harder to use effectively (because chakrams actually require a good amount of skill to use if you aren’t spamming WhirlingBlades while using Periphery). In those cases, Skulldraga can help by acting as a long-range attacker. The damage is once again also surprisingly on the higher side.

So with that said, any thoughts? Suggestions (besides add Crystal affixes)? Questions? (Also, I put this under Build Help, but I’m not really looking for too much help on the build so much as what other people think about it.)

really nice. I remember when I was a Noob, and was reading all the powerful builds in the Forum for Farming and Ascending. and then looking at my inventory and wondering if I would have to make a deal with the devil to make those builds. my first builds were like this post, just using what I find, and tweaking it as I go along to make it better. first builds are always on the cheap, and are a good stepping stone to learning good Crafting skills.
@Ircher I almost gave advice on a better build, but then I read further into the post and realized I didn’t need to. this post kind of makes me think I should make my build ideas on the cheap first, to see how it looks, before I spend hard to find resources on a build that might or might not work out.

Are you implying that he’s a noob?

He’s been here since the old forum.

@Skaul oh no! not at all, I have seen some of @Ircher older posts. but this post with the Build he is showing is great for Noobs to look at and gain confidence in the early game. I had been playing DQ off and on for almost a year before Patch 3.0 came out, and it was that summer that I got serious and started Ascending for 6 Perks with a Wizard. my gears were Adventurer Hat, and the rest had Strength, Intelligence and Fortune affixes from whatever items had them (all Wizard items). as I gained experience and Perks, these base items were changed by taking off and adding on other affixes and myth stones, eventually some Mythics and Crystal affixes. it was around Perk 4 or 5 that I switched items by adding the Nadroji Bonus and Sets to improve my experience gains. by the time I got my sixth Perk, I still had 3 of my original items, but all the affixes on them had been changed to something else. I would have had 4 of the originals, but I made a mistake with the Nadroji and had to fix it by getting a third Nadroji item to activate the Bonus. it was hard for a Noob (me). I was making room for 6 Quest, and I needed loot for improving my gears, so I needed farm affixes. as I got my Perks, I was able to get rid of the farm affixes for damage and defense while getting loot just from the Perks. everyone has their goal for Ascending, and mine was experience, so I was willing to wait for better farming when I finished Ascending. haha, when I started using Obsidian to improve my Ascending, 5 of 6 affixes were what I wanted, and the last one worked ok with what I had, so RNG was nice to this Noob.

Interesting fact here and totally random here. Did you know that the word NOOB originated from diablo 2 in game conversations between players. Usually used by the loosing player against the winning opponents in pvp strangely enough

Have a few questions (New to making elite gear like this):

Does it matter what Chakram I use, or just any Legendary Chakram? Sudarshana has existing socket, is that why you used it?

I think I saw order matters… so you have to do 4 sockets in a piece of gear first, get the affix, THEN enchant other bonuses, correct?

Legend Pet, I only have a legend slime atm. Guessing you use the fairy more for the heal ability? Wait until I find a Legendary one and just use a regular Epic fairy pet until then?

Lastly, I don’t have Elixer yet and feel I’m a long ways off from it yet. (Only just found out I should be buying all these 5 million stones/crystals in shop today! Urgh … )

I would save up enough dust for eternal fabled chakram 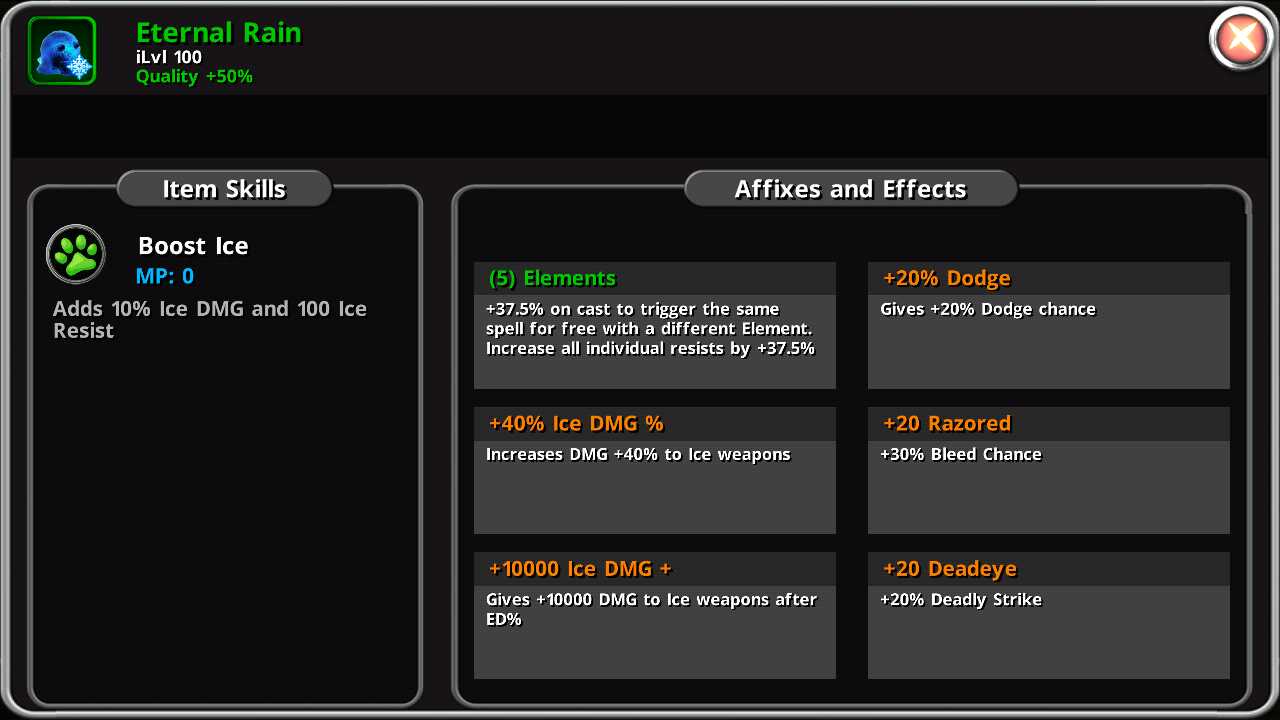 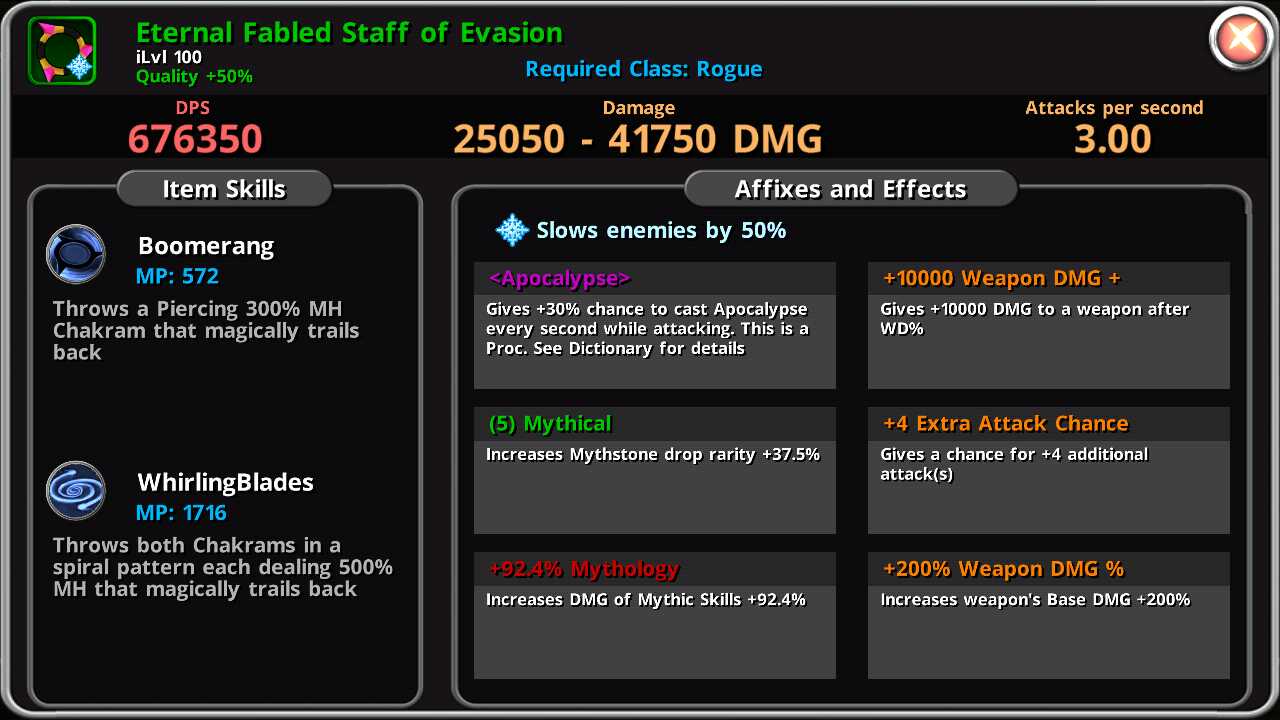 I’ve neglected my rogue. I’m really have to make a pvp build

It doesn’t really matter which Chakram you use because of having to add a mythic to it.

That said, you could consider Ascendant Circle because it already has the Ascendent set affix. Fabled Blade may also be good for 4 sockets.

I started with Sudashara because I didn’t know what set affix I wanted (I let luck dictate that) and it already had weapon dmg+ and weapon dmg% on it making it pretty powerful even without modifying it.

As far as the legend pet goes, it’s not really vital unless you make some changes to the gear where you end up using the Druidic bonus. So thus, stick with your slime.

As far as Elixir goes, just keep playing; it’s bound to show up soonish. Like I said before, it’s not quite as rare as one may think, but you do need some luck in getting it.

Also, my build is more oriented towards PvP, though I imagine that it likely kills faster than your current build. (At the very least, you get much better survivability with this build.)

Welcome back Ircher. superb guide on your build.

I think fabled chakram and Ragnarok are out of my reach atm. I haven’t found either in Legendary yet, sitting on about 5.5k dust currently.

you could consider Ascendant Circle because it already has the Ascendent set affix.

Would I be better making this an Eternal Ascendant Circle instead of Legendary then?

First, I just realized that Ascendent’s Circle has the Ascendent Set Bonus, but that’s of minor note. (You can’t exactly remove the set bonus affix, which is why that’s a slight issue.)

As far as Eternal vs. Legendary, if you want to add a mythic affix to the chakram (which I recommend doing eventually–Arc is really nice tbqh and I’ve heard that Cosmic Orb is great as well), then you don’t want an eternal because you won’t be able to add sockets.

Okay, so Legendary it is! Thanks so much everyone for all the help. Sorry to ask so many questions.

Arcane is no element at all, right? (I thought it was shock until now)

Does that look right? Was thinking it would still be Legendary.

Also, I’ve made the Frozen Earth, how do I add Skulldraga to it now? Do I have to make it a wizard item with Jasper, then reroll it, and then Jasper it back to Rogue…??