Don’t feel like going for updated screen shots at the moment, BUT I’d say that key things for pve is crushing blow, and sets frozen and arcanist are key! Crushing blow is a must it will get your enemy to 1% HP quickly after that it can still be a nightmare. Frozen is going to help kill all surrounding mobs quickly weather your AOE or single target and arcane will stick your all around DPS as you slowly clear or run to end while stacking. I personally use a flintlock rogue with those and reduced cool down for permastealth but starting to change that around cause it’s so boring (on floor 1300ish) PvP is a whole new world. I would go out of my way to make sure I have 0 crushing blow. I use mostly defensive/survivability sets (plague/vamp/faun/defiant/Pathfinder etc) I think some of the key affixes are items you have to find. Push the limit, glass cannon, and barbarian. Only a few of each has items that have those and it takes a bit of playing with to make them work with your gear. 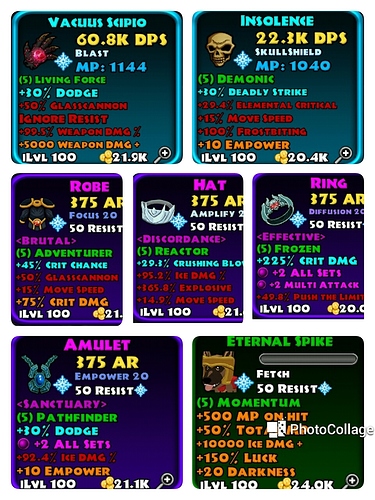 thanks for the clarification bro. I love this game every day i learn something new

hi Good day. i wna share this build of mine for those people who love using bowrogue as there maintoon or dpshireling this as for people who have been using bow and facing the same (2.3 changes i was able to change some eq and affixes which resulted for maximum dps inc. in this patch we can now have +10 individual skill) problem i encountered problems clearing up pack size mob since guidedshot is nerf having hard time bursting epic/carto on high floors ive tried a lot of diff build from cop…


Though i still need some changes in affixes cuz of the new change in game due to latest patch affecting rogue
JesusSaves December 26, 2016, 12:51pm #4

@roykiyoy is this your PvP build? Just wondering cause you have Ignore Resist affix on MH but I thought it was useless in PvP

@JesusSaves the rogue and wiz gears that was posted are soly for 2.5 pve