there are so many Players here that are good in Maximising The Damage . But I didn’t see Posting Calculation for Maximising Damage reduction.
CAN YOU?

Yes. Lemme give an example of what I already know.

This isn’t the most realistic scenario but it’s just one example I’d give.

A typical player may add crystal armour which is around 1700 AR.

Shock resist on all gear including pet and trophy is about 60 shock resist.

Since we have battle mage, this armour will get multiplied by 60% and plagued will multiply this by 75%. This at (3) in PvP.

Now for the shock resists. 60 shock resist. Then Fauns Gift and CV (Cerebral Vortex) buffs this . It hurts all resists but this includes the shock resist anyway and since players of shock element will attack, this will be a substantial difference.

Both increase resists by 12.5% per rank. This is 37.5% at (3). While I’m not really an expert at this and I may not even be correct since if it increases all resist, would that make shock buffed too. I think yes.

Now there are other variables but let’s just count 397.03125 shock resist.

Now this 10k has reduced to 3.4k now which is basically 67% damage reduced.

Equivalence (only triggered a few times , maybe just once at full HP and this attack happened on full HP).

Equivalence says it reduces damage by 60% but I think it’s actually 50%.

10k into 1.7k. Around 83% damage reduction. It’s temporary as the total permanent damage reduction is actually 43% and even more when defiant at low HP. maybe a bit less due to ar pierce or weaken sometimes.

If skullshield worked with Shieldwall and this is basically 10% damage reduction per skull so 30% total.

The formula I used in dictionary for resist and AR (The result varies hugely from PvP and campaign PvE maps). 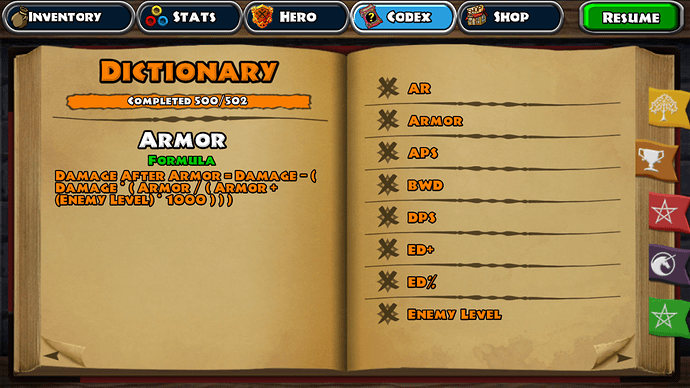 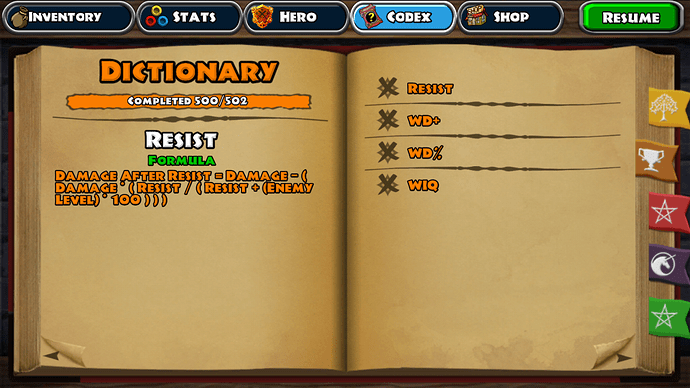 What you write in calculator for resist and I’m surprised I remember the formula off by heart lol.

. Man it paid off investing effort to learn those formula and then learning to make damage reduction builds got easier. I had that motivation to create the frustrating build like Mandelbrot paradox warrior .

I also wanted to share damage Reduction since it’s hardly ever shared. I only learnt the formula after steigerbox shown an example as the dictionary one was kind of confusing.
Since you asked for it, here you go!

Dude ur freakin smart hahaa i really admire you!

Yeah! Also Midlumer , Clogon , Mr Scooty, Cronos and Griffin are really smart too and they helped me in many ways to learn and grow and I did as much effort to learn everything there is on this wonderful game.

I’m a completionist when it comes to most games after all and I like being smart and good at somewhat complex games with so many combos.

I also like sharing knowledge because it’s inevitable that I may eventually go from this game so the last best thing I want to do is share everything I learnt and tried to learn like I learnt from others . Still I’m gonna play a bit longer because I haven’t seen many games like this.

Thanks for admiring me. I always wanted to be admired

. I never thought I was a pro or even that good but I work hard to be the best and help others be great to leave an impact .