It seems that the meaning of discordance on item vs codex is quite different and confusing. Which one is true? Thanks. 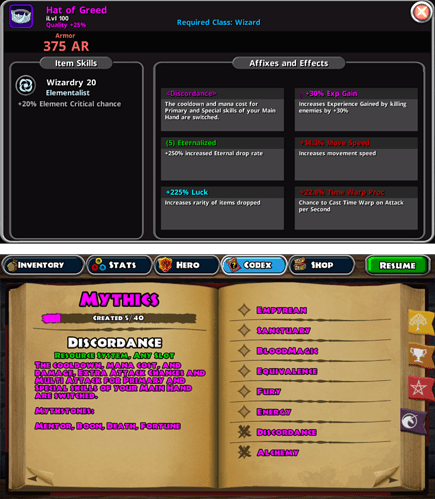 But I do think they both match alright.

To be honest the codex would need an update of its own simply to get updated because if you look closely at it, it is very out of date, might need a thread for this but if everyone was to list the problems it would make it easier for dev or whomever needed the information…

Bottom line, dont trust the codex for now… Great for information, not great for accuracy

The effect of discordance has changed which was not mentioned in the recent patch note. I’m not sure if it’s intended to work like that now. Discordance does not switch damage, mullti attacks and EAC anymore. Which conflicts what’s in the codex. I’ve tested it and it really doesnt switch the damage

Did you make a bug report or tell @Refia?

No, as it looks like it’s intended to work that way now

No, as it looks like it’s intended to work that way now

Discordance is much more useful now, as useful as Energy and Fury, compared to before. Also, oneshot GuidedShot builds are everywhere and kills all the fun in the arena, where it’s the only thing discordance was useful for. Win-win on both counts!

only thing discordance was useful for.
Only? Having tonnes of whirlwinds was one of the most fun things i ever did as a wizard

Brace yourselves, infinite blinkstrikers are coming

Wow, are you guys still so obsessed with rogues? There really is nothing to make you realise that they arent the only way to deal billions of damage per hit. Haha

PVE is a totally different story. There’s tons of ways to deal billions in damage. The changes in discordance ws more because of abuse of rogues in PVP.

And also i noticed that extra attack and multi attack appear to be rendered useless when combined with discordance, both primary and secondary attacks quantity are unaffected (is it only the damage affected?) Am i missing something with the damage change? In not seeing any extra primary or secondary attacks?

Is the deal with Discordance now in patch 2.3 the same as it was in patch 2.1?

Both item description and Codex Mythics page say “See Dictionary for details” and on Dictionary page it says that Discordance swaps dmg along other things. Is this true? (Of course I am asking because i want to make lohko build, but slightly different from the original.)

It’s correct. I tested in 2.5 and it still works how the codex says. The CD is indeed swapped as well as mana cost and damage.