Make a build . Post it here. Then we can help.

My first thought is it for more dmg ? For more farming ? Or for survival because there are many improvements that I see to make your damage higher

I would give advice but php or battle arena isnt really much knowledge from myself there are others that will post for that hopefully.

this Post gives some great information on the basics of making a Build that can do well in Battle Arena. it also explains why certain affixes are used. the rest of the Build can be just like shown or changed to a Build of your own design.

the Set on the Pet is Terrashaper, but I don’t remember the name of the Pet.

I am also not very good in Battle Arena, so don’t forget to do a Search

in case there is information in the Forum that the rest of us don’t know yet.

no no no no no!!! this is about a PVP Build, not a Farm Build!!! all of the Gold Find is for boosting Satyr’s Spirit Set!!! 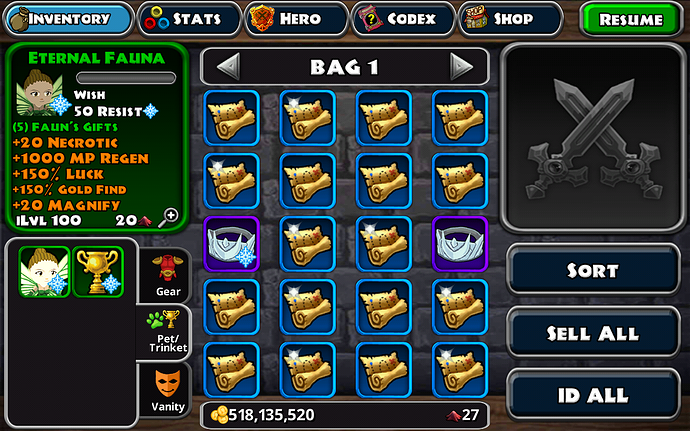 Thank you so much master
Time to get serious now

Yes, sorry about that once again

Can you sent me your pet

I never get eternal pet 🤦

Harmony can be used with Alchemy Resource.

read this Thread. @Mr_Scooty made some updates further in the Thread and explains what he learned.

I tend to shy away from asking for help or advice. However, after grinding for a year trying to get an eternal pet, I am at a loss. Maybe (you) others are having the same issues. I have read the other posts on eternal pets but haven’t found anything helpful. Salient Points: Luck/Item Drops/Gold Find: Max %s (Main/Hireling) Gear: Eternal and nadroji gear on all the time for my main toon. –Eternal (6): Can’t have more than 6 and on main –Nadroji (6): I have used this at set 8 (100% chance to…

hope this helps with Farming for Legend & Eternal Pets.