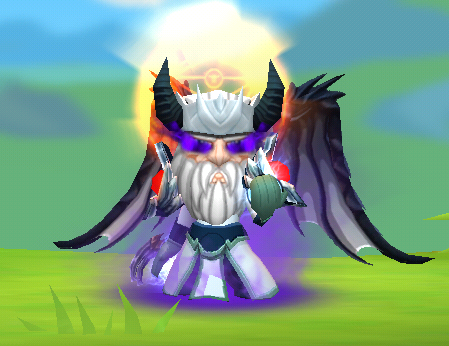 After long and deliberate consideration, I have decided to reveal the Immortal Build. In order to understand the decision, I need you to understand the Immortal Build was leaked to cheaters ~6 months ago who have been exploiting the build in the arena. In lieu of this knowledge, I want every player to have the opportunity to craft and experiment with this unique build.

The first theory craft was @Refia. The first Immortal Build was crafted by @Mandelbrot (Paradox). @Midlumer and I followed shortly after Mandelbrot with a reverse engineered Immortal Build. The push was on since a challenge was made by several players a year ago that the arena was not a challenge.

This is not the traditional regen you utilize in the game to have 3K HP regen/second… You achieve regeneration through the usage of Alchemy Resource Mythic + Permafrost Set Affix or 3x MP Absorb legend affix. Your enemies damage regenerates your HP/MP. You can supplement the craft with traditional Regen but it is not required. Using Permafrost Set Affix or MP Absorb does the following: Damage received is first absorbed before being reduced by damage reduction. You need to take damage to stay alive. You cannot craft an infinite reduction / regen loop (i.e. Never die) - I have tried the mathematics and it’s not possible.

You will want a high amount of continuous Damage Reduction. Continuous Damage reduction is something that is always in effect like armor, resist, defiant, and MP Absorb. Variable Damage Reduction would be; Skullshield (10% reduction / active skull) but they die or get purged easily, Shield wall only lasts a few seconds also, Equivalence works until your HP begins to get displaced.

You want high Hit Points and high Damage Reduction for an effective craft. My current build has 29.6K HP. Using the damage reduction example from above, it will take a hit of ~401,574 (29.6K/0.07371) to kill it before damage reduction. The single hit that kills that craft will likely be around 30K when you look at the combat log, if your HP is ~30K.

4 Ok… Ok… Now Shut up Scooty and spill the beans

One of my old crafts below. You can create many variations of this build going with different sets, mythic combinations or you can invest into resist instead of Armor to avoid Bloodless Trophy AR Pierce effect. You can also add one perseverance affix if you’re worried about bleed builds (remove 10 skulldraga from Offhand and replace with 40 Perseverance). I have had one of these crafts up to 43K HP, 600 power and 92% Damage Reduction. 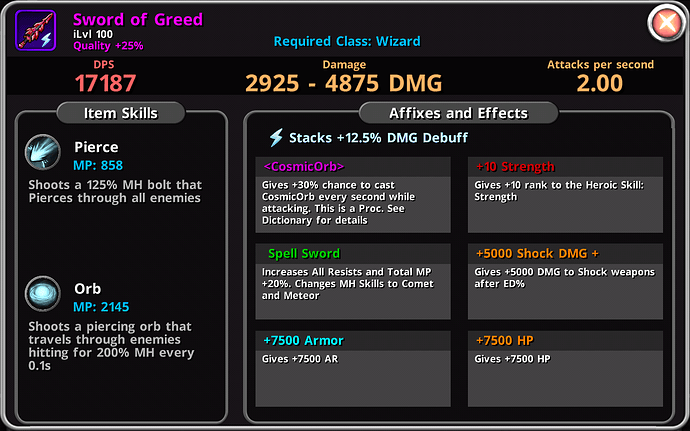 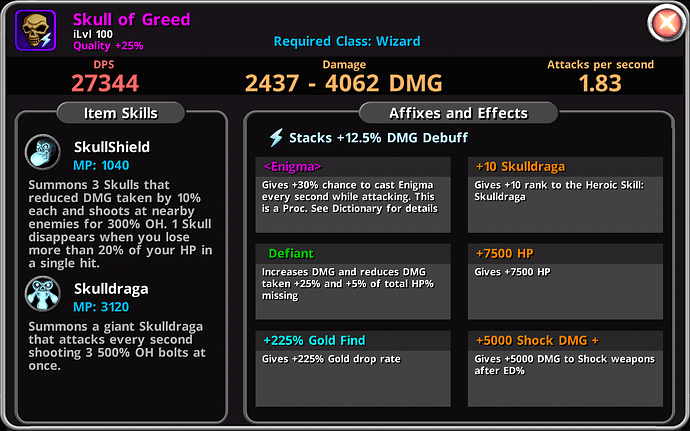 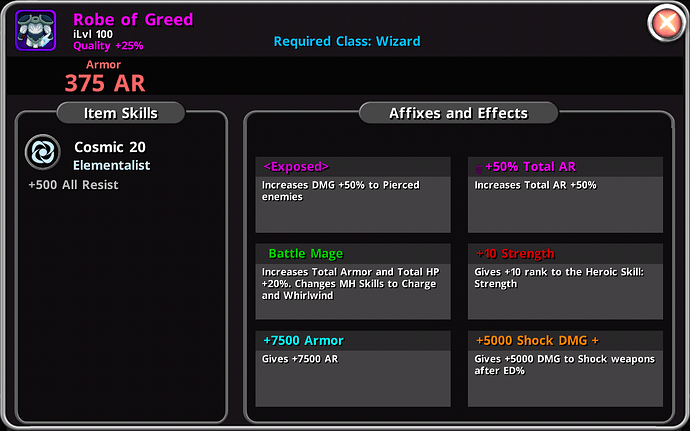 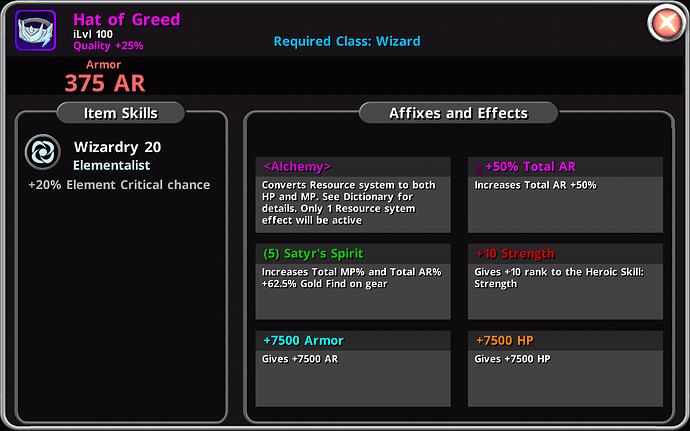 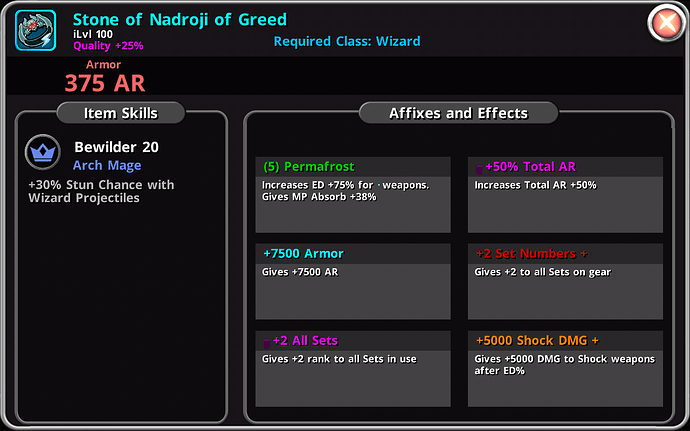 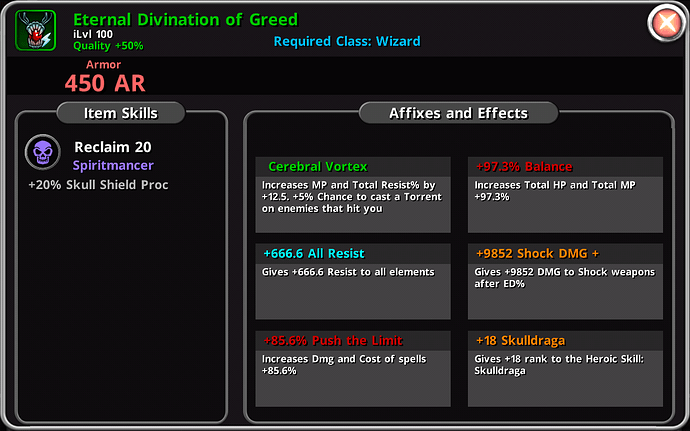 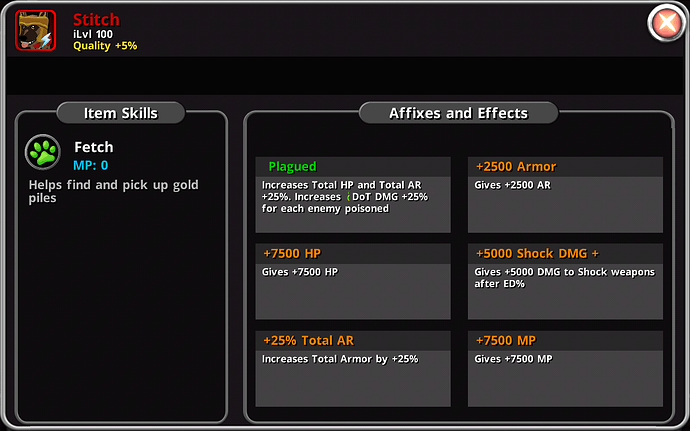 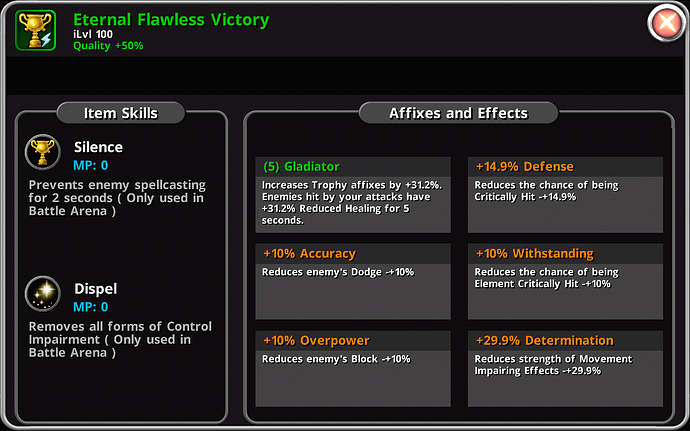 Almost every player has a burst build that destroys immortal build, but this is a weak example, for those who want immortal build.
I would remove CosmicOrb and replace it with storm proc (if you need proc).
Added 1 crystal gold find
Exposed - > Sureshot
Added 1 epic gold find
Skulldraga -> scalp
Delete epic affix +10 from OH
Spell sword -> cosmic power

He just needs an update and this build will be tier 1 immortal build )
I as a fan of burst builds I can say there’s a lot more, but is is normal build

I have it better because I’m using warrior, well, because I’ve made changes that allow you to win even burst builds, this is a good example of immortal build, but it needs to be improved.

Nice Build. can you remember me at the arena @Mr_Scooty??

sureshot is good only if you versus also a immortal build. rupture is the best for me with scalp.

Sureshot also good against any build except high hp.

Well, my and @CuzegSpiked know how to one, but we never did it, i did one time but i dont use it in PvP, and know div1 will be like this, wizard 3 builds , barrage, immortal, Olympian, rouge 2 builds , deadly paralize, swap build, warrior, tank, immo as well, its going to be the lottery what build you fight every day😂!

As I stated in the initial thread, “You can create many variations of this build going with different sets, mythic combinations or you can invest into resist instead of Armor…” I did not want to be prescriptive… For the craft above, you can invest 57 Stat points into MP, 51 into Power and 5 into HP (base) --> this will avoid those sureshot build hits until you are much higher in the draw rounds.

You can remove cosmic orb and enigma. You can use sureshot or ruptured instead of exposed if you are not going to use anything that pierces. You do not need eternal divination. You can select an Offhand special skill that fits your play style… You do not need wizard class either. The important part is the base recipe is in plain sight for all players.

Base Immortal Build craft = High Damage Reduction + Alchemy + (MP Absorb thru Permafrost or legend affix) + Sets… The remaining affixes and OH Skill are variable that fit each player. You will want HP close to or higher than the build from above ~30.7K.

Extremely thorough write up! Thanks!!

The fact that this build that was secret for long period of time, and was leaked through cheaters is just saddening for those who worked hard in conceptualizing this build.

You just did what you think is fair to those who are new players here. And again thanks for revealing the build. I tried to make the same immortal build back when the build was secret only to 3 people but it ends up not the same (tough) as your build. I focused on healing rather than the dmge reduc that u stated. The only downside to your build was the burst dmage users( storm/crit/deadly) and mine was the bleed users.

Awesome. I understand this decision

@Mr_Scooty thanks. In some ways my current build is similar. I use permafrost, equality, druid and defiant set affixes. Never thought about putting stats into armour. I tend to use epic mp and hp on hit. That’s why I’m stuck in eternal div 9 to 6. I’m thinking of stacking some procs into my build

I may have to remove the elixirs from weapons and armour to make room. But even a low proc on a highly resilient character must spawn more often ?.. hmm maybe got a better idea. The pacifist or thorns variant

I have used some of the ideas found in most PVP posts, and now I see from this post how important they really are. my common sense says this Immortal Build that has been shared is too crazy to work, but there are too many posts that say otherwise. now that I see what goes into making an Immortal Build work, I can see how different a PVE build is from a PVP build. they are so different that it is almost like playing 2 different games with 2 different sets of game mechanics. and I notice just from looking at the build, it would be possible to make an Immortal Junior Build (Epic affixes and base Legend items), but it would take a good Farm Build and lots of farming to get the loot to make a good Immortal Build.
@Refia @Mandelbrot @Midlumer @Mr_Scooty thanks for the Immortal Builds. you all challenged the DQ community to up our game, in both PVP and PVE. there are going to be a lot of Immortal Builds in the Arena now, but that just means more excitement and fun. I think. but maybe not, as not everyone wants a 10+ round battle every time they are in the Arena.

And now I suggest a new collective post on beating the cheaters. The only way to do it is what @Mr_Scooty has done we reveal all our builds and learn off each other

Every build has a flaw.learning of each other will not create a invincible buIld and we will know our tactics so very well. But getting rid of cheaters will be nice so we can have nice losses and victories

what @Mr_Scooty did that helps the most is give us an idea of the foundation of building an Immortal Build. 14-21 slots just for making the build Immortal, and the rest is customizable by each player. lots of room for variety and innovation.
Cheaters wont go away, but this will even the playing field a lot between Cheaters & Legit Players. it’s not like they can put 10 million AR on each item. they are stuck using the same affixes as everyone else, and a good farm build can get the resources to make a build that rivals or surpasses any build built by cheating. and if they could put 10 million AR on each item, it would be obvious, brought to a Mods attention in the Cheaters Thread, and probably get themselves sent to the Cheaters Arena.