Hey there!
I was trying to replace my Pathfinder Set affix with something more useful.
I got Epiphany(5) and max Dodge so Pathfinder gives me 62.5*75=46.875% increased damage.
I got 100% Glasscannon so the other feature of Pathfinder doesn’t matter to me.
I already have Arcanist, Ascendant, Epiphany, Frozen and Adventurer.
Movement speed was 25% so kinda meh and I decided to try out Draught.
I see a big inrease in the movement speed indeed!
But my Attack Speed is already capped at 75% and I cannot tell if it grows with Draught more.
Please let me know if I really get a boost in Attack speed with Draught or if its already capped and I shall stay with Pathfinder.

Here the current setup. Pathfinder ring looks all the same but with Pathfinder instead of Draught. 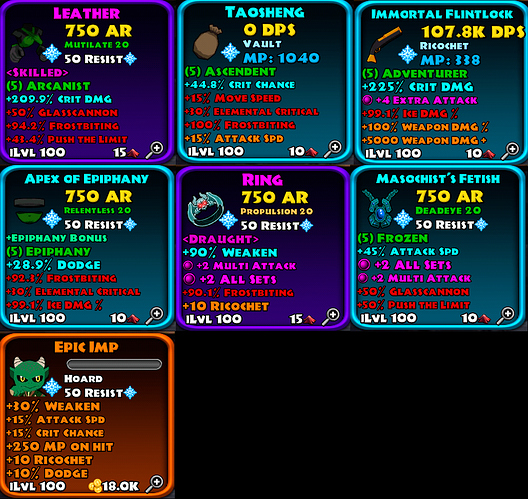 Ohhh… interesting. Wish I could say for sure, but you got me stumped.

I think it go beyond the cap.

No cap . Yes the 75% attack speed is capped but the APS isn’t capped.

75% attack speed is just one method to increase APS. Draught also , Hunger , Angelic , certain talents such as celerity for chakram or Fletcher for bow. Then there’s skill APS that can be naturally good even on its own. Synergy is a good one if you use minions for APS and Move speed Increase.

Barrage has innate 50% APS increase as a skill itself. Some skills already have high APS default too.