In my crystal stash… i dont understand. 0.o 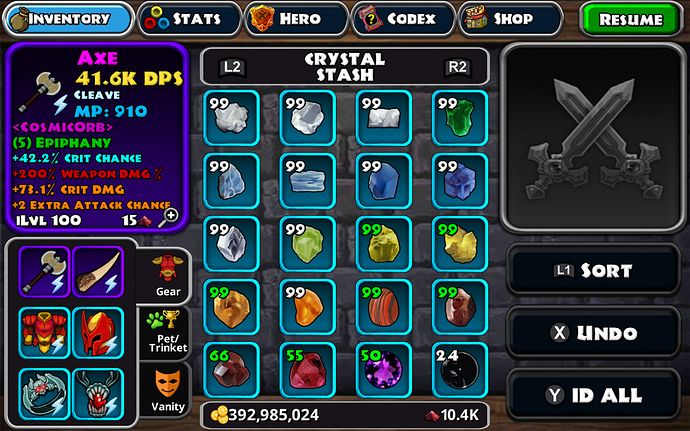 Also I had one where all emeralds were replaced by a legend but turns out that fixed itself and a dream.

you’re richer than me while I thought I was so pr0. stop hurting me so bad

Lol this was how rich I was sometime ago.

Well, i fixed it, but not exactly an ideal fix…

I had to convert ALL my crystals freeing up the spots, then auto pickup farming filled in the right spots. O,o

Thats not a problem, lol. But having no emeralds or diamonds at all is… 0,o

Also, i play on nvidia tv, so i dont have touch ability to convert. Its l2 and r2 trigger bound. Though, still finger operated… lol

Oh ok. Now I feel poor because I’ve been testing too much lol. Testing possible combinations and ideas. I’ve got so many build ideas but now don’t feel as though I can afford like i used to. My crystals starved after making many build .

Yep I do that.

My god i wish i had those crystals

homicide has got some ninja farming techniques

Hmm, i just farm, lots, love looty. I think actually i prolly not using what most would to farm, but i like to think im onto something… 0,o

Also, you could join cuzegs discord group. A few of us in there at times to live chat.

How do i join it?