This is the most crazy thing I have ever did in Dungeon Quest ! And this picture is totaly unbelievable 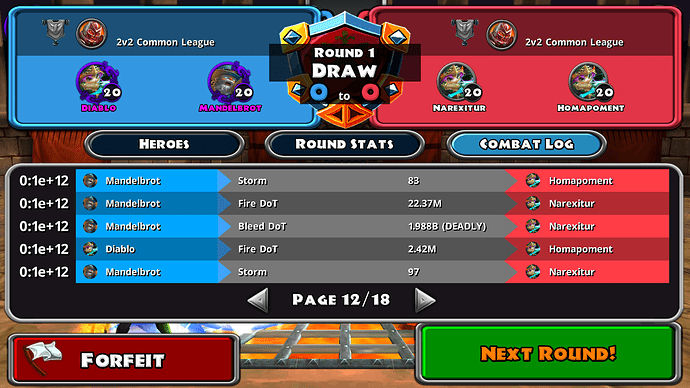 Round 1 page 12! How fantastic to have almost 2B damage in the arena.

This is crazy. Well done!

This is why Mandelbrot should be nerf.

So I need to start stacking perseverance or was this just an academic exercise?

Try to get 100% Perseverance

i think that almost 2B Bleed DMG wouldnt be nerf

And seriously on wizard class ?

I did not use word “build” or some,just made this damage combination to search the ultimate number on dummy.
The longer match ,the higher perseverance in need.It depend on your play style.

You say that wizard only 100 strom but 2B bleed ?
Rogue made original damage,wizard stacked crit damage,thats one of tricks.

arena nowadays got lots of Titans

Tis true. Nearly every wizard you encounter for this play style has stack CRT DMG and flat DMG. Also noticed an even bigger number of manashield players. It’s quite hilarious facing 'em.

In this post, the AI shows his true HP. High DMG dealt means high HP of the receiver.

But one thing I dont understand is why this people dont lose crystals to make experimental builds. Im so jealous.

Im always out of ammo.

What the hell! XD thats amazing!

This experimental build is my dream,it is much more meaningful than any pvp/pve builds for me.In pvp,you just need play more to be the top.In pve

I think all players get ultimate build now.But this 2B damage record will be ultra hard to break,I also learnt a lot in creating it.
P.S :I usually “write” build on computer like this before creating,good habit to save resources

Point : All in mana

Amazing! Thanks for sharing!

What’s the meaning of this.

I’m just planning to build a Warrior with 1.6M HP and 70% Reduce DMG and use in Arena. But still I’m always out of ammo even I farm hard still one of my crystals will be out of stack.