Getting frustrated on IMMORTAL LEAGUE😭😭😭😭😭

I reaĺly enjoyed playing pvp. But when i reached eternal division 1. I get frustrated because of those immortal build. It takes 10 to 15 rounds to kill them. 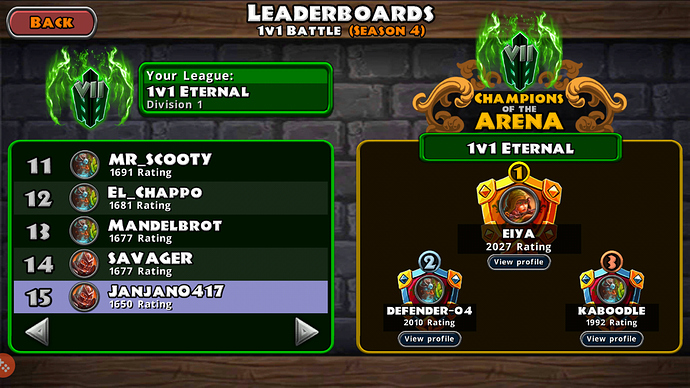 I wish someone would help me upgrade my build. Im getting bored playing like a boxer(boxing has 12 rounds)

Win against them (even taking 15 rounds), they will down on ranking while you will raise, once you have a certain MMR diference, you won’t face them so often.
Anyway, there is no real secret you already don’t know for winning faster against them: Increases your damage while being able to survive enough rounds to beat 'em up.

Do you mean when i defeat them their mmr rating goes down???

Yes, they mmr goes down, and you go up, if you have like 80 our 100 mmr diference you will not face them more often, is like if you are in div2 you will not face div5, you will face the peaple on top of you antill you get 1 place, so more mmr points = new enemys, and it helps if you kill immortal builds!

simple😄 go on burst damage sir, thats what i can say… some can even kill it in 1round hahaha very unbelievable but its amazingly true😂

Every build has its weakness’s. Make an immortal. Find that weakness then make an opposite

yeah thats real and its a fact, amazing right?