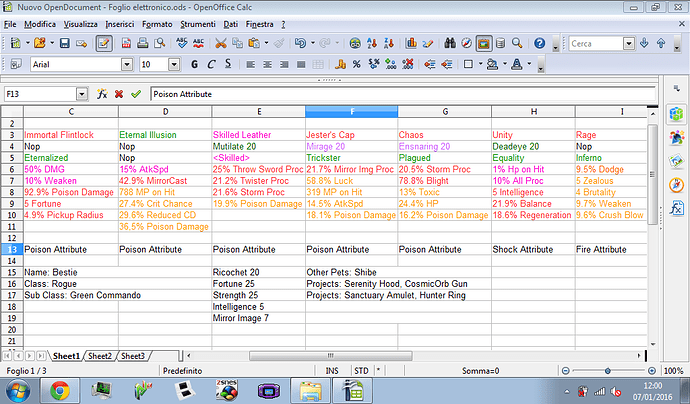 As you can see, i updated my build. I renamed it the Green Commando, mainly because i can simply walk to a crowd, use a single Scatter Shot and… Well, slaughter them with minimal effort and maximum profit.
The main affixes i think are must have: ThrowSword, Twister, ElemCritical and Storm Proc.
Skilled works really fine for hammering to the enemy while waiting for procs, i use a mirror because more procs, and that MirrorCast just means more procs.
Oh, and i put in a 10% all procs because i proc more procs while proccing more procs. Yo dawg.
Rage is pretty random for the set affix, that is almost useless, but well i guess it could be useful if i’d switch to Fire Element. I prefer Poison personally, i just keep him for the affixes.
Immortal Flintlock is currently the strongest i have (Still random) and i’m waiting for some more Zircons so i can make a CosmicOrb Flintlock.
The Jester’s Cap just puts more MirrorImages in, because? Yup, more procs.
This build relies HEAVILY on procs, but you should be fine anyway because so many damn procs can proc at the same time. And every proc can also proc the MirrorCast. Yo dawg.
Plagued is just for HP, since it’s a bit frail.
You can add some flavor to it by playing around with the talents too. Ensnaring, Deadfall and Ambush just add more procs, while Deadeye, Mutilate and Deception work well with the Mirror Images and Extra Attacks.
I’m currently trying to find some more Crystals for sockets, and trying to make Elixir. My Mythic projects are listed in the image.
Currently trying to get: More offensive procs

maybe i should rename it to Proc Gunner.
EDIT: Propulsion works just fine too, in BOTH PVP AND PVE.
PVP SECTION!!!
Vs. Warr: Well, Warriors may be tanky as hell, but Twister and Storm are there for a reason. Never saw anything resist 5+ seconds against a Storm. And if they get too close, equip your big caliber and Scattershot them to death.
Vs. Wiz: Wizards are more tricky. You need to be outside of their range and pray to hit them. Since they are generally frail, a few bullets should do. ThrowSword works pretty fine also if you have good aim.
Vs. Rogue: Things start to get hairy. Guidedshot Rogues are a PITA as always, pray to kill them before they kill you. BlinkStrike Rogues are better since they are squishier and you can still Storm and Twister them to death. Believe it or not, i am quickly rising in the Arena, losing ONLY to the occasional Guidedshot build and Glasscannon leech build.
From the Green Commando, have fun and bye bye

Looks as if it’s not close to being finished, but it looks like it works. That was my first char, basically.

As per usual with builds, you could drop some slots by using Fury or Energy mythic. Energy is much better in my opinion.

Since this relies so much on continuous attacks i think Fury would be better, thanks for your opinion

that excel so neat~

Thanks, i am using Excel because no photo manipulaating skills

Edited with the pvp section.

there will be a slight changes in regeneration %. the changes you will love =)

Really? Well i rely more on leech but still it’s a nice addition