Have not played arena: +2 lost matches?😵

There is no problem with that.

But an additional +2 lost matches on my stats without me duking in is something new to me. I already have a bad win-to-lose ratio and I do not want that to get any worse(if I can

Should this +lose even if you are out normal?

Follow my links below for why you are experiencing the issue you posted. You likely had an “internet” loss which takes a couple of hours to show up.

Several times today and in the past several days, I will win an arena match but when the points begin to update it doesn’t finish. I end up showing victory but then end with the match 0-3 when the match was actually 3-0. This keeps bumping my rank down and takes away 29 to 31 points. Attached is a screenshot where I won the match but it ends up being a loss. I checked my internet connection and my download speed is 60Mbps and upload is 5Mbps. [image] The battle arena has been behaving differe…

You will lose those points at some point in time. Some of my losses that occur that way can take up to two hours to show up. The point loss is always -31. Since your internet connection isn’t working, you connect but when you cancel, it counts that as a defeat or abandoned match. I have ~6000 matches in arena right now with 107 losses. A bunch of my losses occurred that exact way. Unless you have given your email address and DQ password to someone, you should not worry about someone playing und…

Thank you @Kaboodle I think I might have earned my first defeat vs the internet so it needs a ranking. I will know if I get the loss in the next two hours. Confirmed – it took about 1.5 hours for the internet loss to show up

Thanks very much @Mr_Scooty. I also had this distorted screen issue. 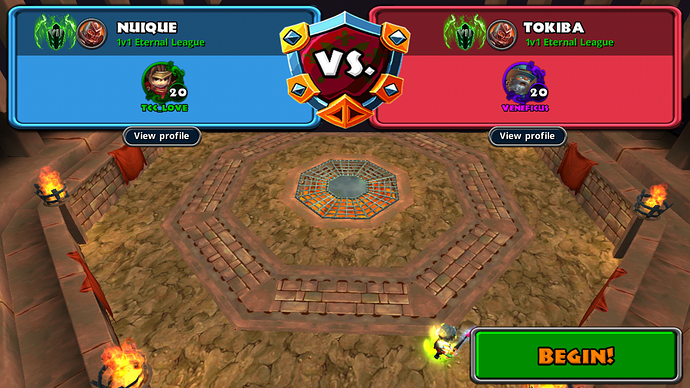 And also had this “+0xp” even if I win. Coupled with big drops in mmr. Had to laugh it off.

I am aware of horrible internet sabotaging the arena(it is typical for us here in the Phil.

) But the second link you shared answers it now.

Your problem on the second link also occurred to me.

And now I know the exact culprit:

Boom!!! Your hard-earned points are scaled down +plus you take loses.

The second link you shared @Mr_Scooty answers this
problem.

Lesson learned(esp. for players in the Phil.):

If you are unsure of your internet connection,
do not touch this:

If you have bad internet and you cancel, the server will treat it as a lost match. You will lose points and add lost matches, if you cared about them.

Once again, thank you very much @Mr_Scooty!

You are very welcome!!