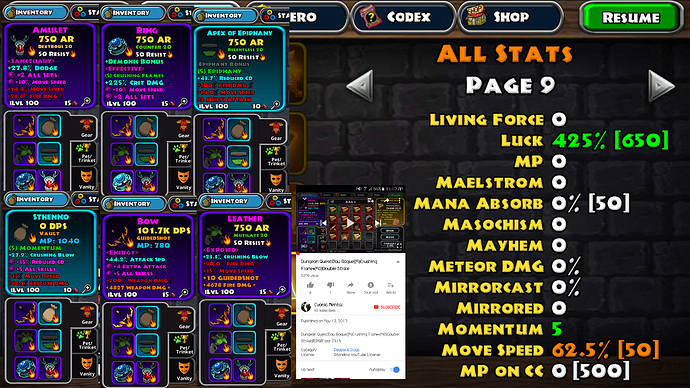 i was following this guys build when i noticed my ms stat gets stucked at 62.5 … whats wrong please help.

Why did you get so much ms may i ask? Whats the catch? And which guide is that? If u tell me i can help u

My ephiphany should alreafy be triggered right?

Bump. Update. Found the culprit. Ephiphany must be 6 i guess…

There is a limit for most things in dq dude. If you want more ms you should have 1 or 2 more epiphany i am afraid it wont help you much though

Ughhh i really do need ephiphany 7…cant do it lol…

Chill dude you are not goku .D we are trying to have fun not becoming super saiyans… (it really desnt have to go even further beyond)

just for you to know. ephipany is not good for pvp. but its useful in pve

Edit: after reading the post again, I realize this is about a PVP build and maybe the Epiphany Bonus activation, but hopefully, this will help people with their PVE build.

The real cap to bonus MS is 100%. This is including both the affix cap 50% (or 62.5% on Epiphany 5) and the other % move speed from talents, bonuses, set affixes, Mythics and skills (also hero points). You can also get 100% completely disregarding the legend affix for Move Speed, though it isn’t likely permanent the way legend affix move speed is, and using certain skills, hero points, mythics, etc.
Yes you have reached the 62.5% move speed cap but you can fill the rest of that 37.5% move speed that can be utilised by your character and Momentum (5) set affix by set affixes and other methods; in combination with the Affix move speed aka Legend Move Speed from Ruby/ found legends + the dexterity hero points.

Also technically your character default move speed is 100% but the move speed bonus you add can get up to 200% or so (though Momentum will only count the bonus 100% and not the native move speed like it once did). That can also explain why Sloth negative affix in Seven Deadly Sins can make you stay to a standstill and not move unless you activate the bonus or add move speed affixes.

I do agree it’s not the greatest of ideas to use Epiphany to increase legend move speed cap as it’s possible that it doesn’t affect the overall cap of 100% (though it is very possible that the cap can be raised to 120% at least but overall 100% move speed is quite good even if i’m not correct and im uncertain Momentum can allow above 100% move speed for damage calculations, though i wouldn’t completely dismiss the possibility). Another thing is that it is much easier to get 100% or above move speed by skills combined with hero points for a specific move speed build, talents, sets, mythics and even bonuses and save 1-3 or 4 affix slots used for legend move speed. @Golem i agree.

Example:
Knightscharge+Sprint and then both hero points at 20 will net you really high move speed, at least up to 90% for example. Even if not using sprint, Knightscharge is still 50% MS at 20 and then Adventurer Set (5) for another 37.5% move speed increase so total being 87.5% move speed (you need gold and constant use of knightscharge but thats not a huge pain). You can use Dexterity 20 hero points also even though that does use the Move Speed stat which is capped up to 50% (or higher with epiphany).

You can easily also use Draught Mythic ( a nice boost for move speed but it means no mp gained from potion and not all builds need it, plus it also increases Attack Speed by 50% which is massive and that can be good for builds that love Attack Speed.

Some other skills with move speed that can also get high if including hero points is Shieldwall (40% move speed alone), Coat Skill, Stealth. Whirlwind (though it also has a slowdown effect but its faster at hero point 20) , vault with hero points and some others. A lot of options to max out Momentum (5) for up to 50% more dmg (or close to it depending on how close to 100% move speed), Adventurer gives a big amount of move speed + 37.5% more dmg overall if gold collected so a nice synergy with Momentum. That’s why Momentum and Adventurer have been sought after a lot due to giving a lot of DMG when fulfilled and sometimes it takes low effort or almost no effort to achieve.

In arena, not as important to fulfill momentum but you can fill it to an extent. Though ideally a balance of both dmg and damage reduction helps in arena and not all builds use Momentum. Mostly situational in arena and build specifics and the damage gains aren’t as huge. Pure dmg with survival can work with it though ( I used it well back with Shieldwall for eg when I was able to) but hero points if your build allows it helps.

@CuzegSpiked when I first used Momentum, I had only my native/base movement speed, and I had a damage bonus, so the base 100% movement speed works with Momentum. well, I also had Dexterity 40, but I still had a huge improvement in damage, more than if Momentum was only using the Dexterity movement buff. well, has anyone put Momentum on a blank set of items and compared with totally blank item to see if Momentum works/doesn’t work with base movement speed? if I had 20 Amethyst to play with, I would find out myself.

(though Momentum will only count the bonus 100% and not the native move speed like it once did).

this is a huge game changer if true. I think I need to check it out, so the race is on to see who learns the answer first.

on the other hand, it makes the changes I was thinking of in another build more important.