Oh ok. So I remove the legendary (red). Then i will need a ruby to add another legendary otherwise I’ll have to use a topaz for epic or lairmar for norm/epic?

Can more than one affix be the same? For example I rolled 54% luck on a ring. Can another affix also roll as luck?

As a wizard farmer should I be doin skullshield or manashield?

I don’t know the answer to your last question Pharaoh (what an appropriate name), but something that helped me a lot in understanding basic item crafting / modifying is that: every item of the same type, at its max, is the same. I’ll try to explain what I mean in the easiest possible way since it might sound confusing if I don’t proceed with care

Say your wizard has just started and you see that he has a level 1 wand equipped already. It’s important to know that that wand has the capability to be upgraded (using the appropriate crystals) and to be maxed out to be identical to the “best” wand in the game, with two exceptions - there are a few Ruby affixes and Set Affixes which can only be found already on an item and cannot be added to one using crystals.

I want to make this even easier for you since it’s still confusing I think. Let’s both do this: in the game click on the Codex, then LegendEx, Then click Wizard. These are, if you don’t already know, all of the fixed Legendary items you can loot in the game. Unless you find one that’s an Eternal Rare, they are otherwise all modify-able.

Right then, so on the 1st page we see an item called ‘Livid’s Wicked Wand’. It’s not especially rare, especially unrare, nor especially anything else (CS Lewis). Now let’s move ahead 14 pages in the Wizard LegendEx section. We see another wand here called ‘Aether Spark’, which is slightly harder to obtain because you don’t find it until floor 400+. But here is the key - these two wands, if you removed all of their affixes (using Larimar or Quartz crystals), would both boil down to be the exact same Basic Wand. Provided that they are the same Quality and Level (also modify-able with crystals), they will have the exact same damage and abilities). So now that you know that, you know that any item, with enough crystals, can be modified to be the most “powerful” item, whatever you think that may be. I believe this is the foundation of item crafting in the game.

Here’s the catch though, and something you only learn as you keep playing. If we look again at Aether Spark in the LegendEx we see: 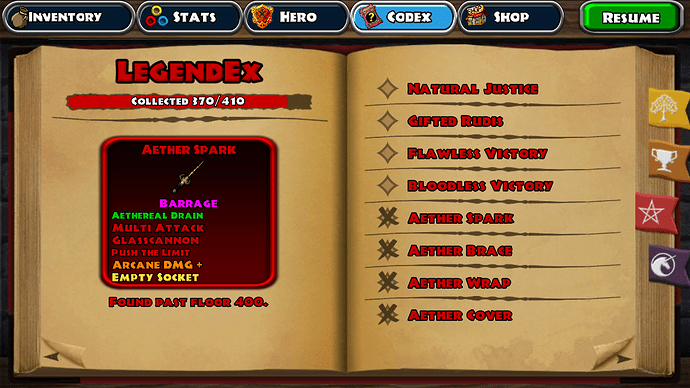 If we put what I just said into practice and spend a ton of crystals on our level 1 wand, we would see / discover we could make it identical to Aether Spark, with one exception - and this exception alone may be what makes this wand more valuable to us - Aether Spark as it is looted has the Ruby affix called ‘Push the Limit’. This affix cannot be rolled onto an item using a Ruby, it can only be found already inside of an item. So with this in mind, the one and only thing that makes this wand any better than my level 1 wand which I plan to modify a ton, is this affix alone. I could be scowering floors looking for Aether Spark JUST so I can remove all the affixes except Push the Limit and craft something else entirely with that as the initial molding so to speak. (Note that the Wiki link I’m about to paste below says that Push the Limit, in particular, is a roll-able affix using Ruby. It is not. I think that’s one of the only mistakes on the page though.) it’s actually more complicated than this once you consider that items can be switched to other classes so you might actually want Aether Spark for its Push the Limit affix with the actual intent of using a Jasper on it to turn it into a weapon for your Warrior that you want to modify and build on.

So you see, the key then is to learn which Ruby (and Amethyst / green) affixes can be rolled and which can only be found already attached to an item. This factor alone necessitates you having a particular looted item to perfect your build down the road when you get to that point.

All affixes, along with whether or not you can roll them, are listed here: http://dungeonquest.wikia.com/wiki/Affixes

I’ll have to re read this and edit some things perhaps, but I hope that makes sense.

Also a few Set affixes which are unrollable with Amethyst include Epiphany, Nadroji, Cerebral Vortex, Crystallized, Eternallized, among others.

Here’s another tip that will really help you I think as your farming:

^^ i.e. These items have unique Ruby and/or Set affixes which cannot be rolled with crystals, only looted

A quick question: can an item have gold fine and luck affix on it at the same time?

What you could have (no need to do though) is an item with legend affix 50% item drops and then use a mythstone which gives 40% item drops. Usually, yo not meant to have two same affix on one item but mythstones are the exception. This means you can easily get 90% item drops on one item if you try steigers fortune sword for eg.
However, it’s best to spend the affix slots wisely

I’m not strong enough for mythic above 200.

Hmm that depends. If you’re looking for items, then epic 300 it is but have a look at codex to see the difficulties. The items that require epic difficulty are nadrojis robe/crown, and I think epiphany gear.
Mythic 3 items are items with crystalline,eternalized, cerebral vortex, smoke screen and seven deadly sins.
Mythic 1 items are the mashocism items and berserker items.

That means when you storm through maps in very easy mode (with good farm equipment), its easy to get these items if you need them easily (ones without difficulty requirements). Epic mode is a good idea if you like to do floor 300 if you hunt nadroji robe/crown along the way but I would suggest the easiest mode possible where you still farm decent and do well

Floor 200 I find is a great farming spot for gold and many legends for converting because I find that sometikes I get 6M gold with the correct farm gears on packsize maps. Of course you may not get 6M gold but you will still get a large sum of gold in floor 200 and below. There is something which makes floors above 200 generally have less gold/item drops. That doesn’t mean the items won’t drop much though. You can easily get your scoundrels items anyday even with that odd restriction of less items in general.

. Getting that ed% robe or wd% hammer is quite easy on very easy to a difficulty your comfortable with. Keep that in mind. When you’re ready, higher difficulty for more acess really.

What amount of gold find and luck should I shoot for on my gear?

Here’s what I would do if I were in your spot:

. My favorite class btw. How I get 6Mgold is by having maxed out gold find, maxed out luck (for dealer perk) and maxed out item drops with epiphany. Then I also have fortunate and dealer to aid me in this. Enshrined can help a small bit too. Accomplished perk can definitely help too

However, since you can’t simply get epiphany, just try to get max farm affixes 650% GF/LUCK and 300% item drops. Along with that, get dealer and fortunate perk as must have. Hope this helps you pick up at least a lil more gold than usual.

. I do get better legends though but not as many eternals to convert as a trade off. Hope this helps

what is an eternal??? i have two items w/ an “eternal” name on it… whats so special about it?? pls answers. and sorry just a newbie

eternal can double the affix but cannot be edit

Yes. They have 50% quality too which means double affixes. That means for eg 100% blight turns in 200% blight, 5000 weapon dmg turns to 10k weapon dmg and so on. Ofc they can’t be edited majorly. Only edits you can do is change their class, change item nature and change talents as well as change elements.

You can’t level them up because it kills the grinding to floor 500 push for eternals lvl100 where they’re available. At floor 2000 or 1000 or whatever it is, at level 1, you can buy level 100 eternals guaranteed with level 1 hirling or main but you need a decent amount of farm affixes on the lvl100 character.

Eternals like fabled blade/staff/ chakram and unreal hood are very good because you can add mythics on them and epic affixes that are 2x better.

You can use garnet to remove mythstones in socketed eternals though which is good and you can add epic affixes to eternals like fabled weapon and unreal hood. They are very hard to find though so you will be extremely lucky to find them.

thanks guys… one last question… is it normal to have the floor 300 lance that has eternalized set. even if im just on floor 58?? but when i check it on the codex . there is no mark on it like the others that i have looted…

sometimes it has a random drop at any floor

Before version 2.1 it was very common in lower floors

Can I roll prismatic on any piece of gear using citrine crystal?