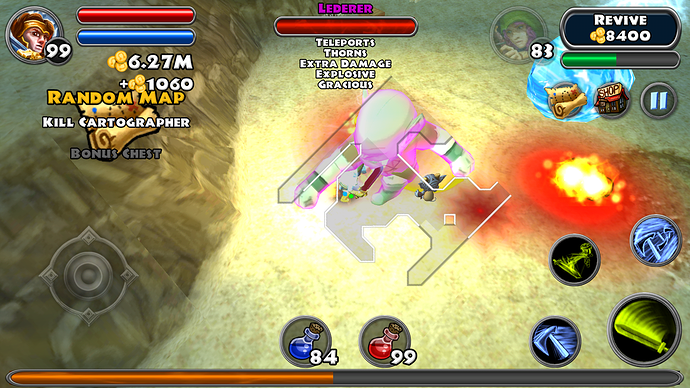 Can’t beat him
On normal. Floor 290s.
Map has skyfall and is killing me if I stop moveing. If I would of looked I would not of started the map of I was going to spawn him. And now can’t beat

About to give up started at like 7.5m gold now at 5m… and dropping lol I don’t think the reward is worth it.

Buy the map so you can see everything, rush to the cartographer and kill him. It will stop the sky fall.

I left I killed every thing I could till him.

Well, if you cant kill him, you cant kill him. So in the future always keep an eye on mythic feat once you’ve killed 9 Legend Boss and about 30 Epic Bosses switch to the easiest difficulty where you can kill the mythic boss = )

I’m sad for you. Missing out on an eternal is rough.

Do you have hunter ring? If so, you can speed up the mythic enemy chance by a major amount. It should be crafted and when you are close to mythic enemy, go to low floor than 200 and fight him there. Mythic enemies are not hard if they are weak or you do high dmg.

Also as @f00kee said, keep an eye out before you do map. I made your mistake a few times and regret it now

Funny enough my pvp build is very powerful in floor 400+ as well as beat tank build or clogon. Dont worry about missing out on eternal becz hunter ring speed you up to get mythic enemies. Also you need to make proper farming build and farm lower floors and make sure you get 200% item drops including 100% hidden item drops from hiring, 650% gold find and luck maxed on both main and hiring character. If you get 500k gold in less than 5 minutes per floor, you made a really good farming build. I made a farming build that can get 500k gold in 3-5 mins per floor becz it so quick. Sprint proc/sprint skill with adventurer really good and in my case I have aftermath with 60% meteor proc so I can constantly move fast and collect lot of gold. I use poison in my case becz farming build have weak dps.n.

A better alternative is sprint and adventurer from fortune bringer build with super destructive hiring. You MUST make a farming build so 5 million gold is easy as pie in under an hour. I get 2 million per pack size map if pack size is at 190%+ . That means I can get 20 million per hour and more if I have gold boost from ad and provided I have enough pack size maps.