How to optimize crystal farming

And u know what is the meaning of AR

Armour rating. AR is short for Armour and the higher the AR, the more Armour you have. The more Armour, the better damage Reduction. 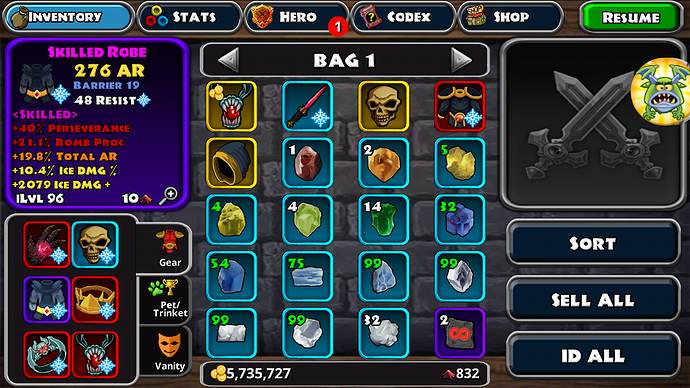 For mass crystal farming… put difficulty on easy and farm the hell out of f400 - f500.

I give a simple tip: remove yellow affixes (with Kyanite, be careful not to remove good ones!) and use Angelite only when there is just one free spot, you will get 100% an orange affix that has double effect! You have enough crystals to do that. When all of them are orange you can try rerolling those ones with Larimar, or if you have already 1 or 2 good ones you can apply Kyanite+Angelite again.

I’m happy that you managed to do your thing.

Yep! Also floor 200 sometimes helps with the massive amount of eternal I got. 40+ eternal in one day! That’s how lucky I was in floor 200!

But as an early player, floor 400 to 500 is definitely superior to get thousands and thousands of crystals of the mid range which you can eventually convert to and the thousands to have when spending on legend pets. Also for ultra rare crystals, especially on legend maps, it helps alot. Floor 200 is ok but floor 400 is better and 500. Sometimes as an all time floor not doing floor 200.

So in floor 400 to 500 im using the treasure map for that right ? Cause in the select floor section 200 is the highest floor

Yes. When you open a map, you can also buy another map from vendor that will be same level as map you are in.

So if you buy and complete a f200 map, the cartographer will drop you a f201 map… etc

If you want back up maps, just remember to buy map from vendor while in whatever map

Also, you can buy a map and convert it up levels to highest unlocked map land lastly, you can raise rarity found on lower floors with ease by using the crystalline set, however this will not increase the amount of crystals dropped. For that, item drops is needed.

How to convert it

After you purchase the map from the in game shop it will be placed in your inventory.
Go to your inventory bag with the map
Press on the map
Instead of pressing “Open” press the “Convert” button.
Pay the convert price and it will increase the level of the floor the Challenge Map will open on.
You can “convert” until you reach the highest floor that your character has reached. 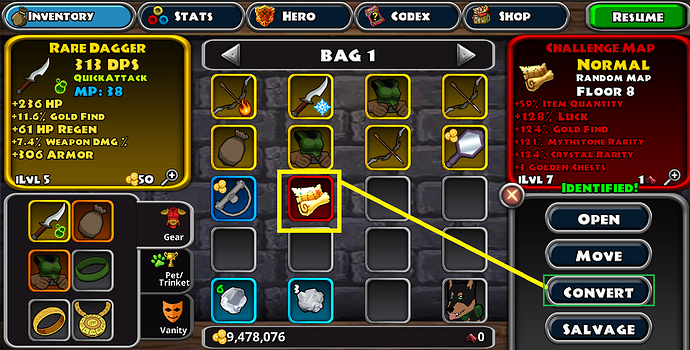 Ohhh i see thank you very much . Thank you guys for helping me

Haha @tdaniel
Im betting that scrubby lil character is NOT your legit chars… then again, do devs have time to play their masterpiece?