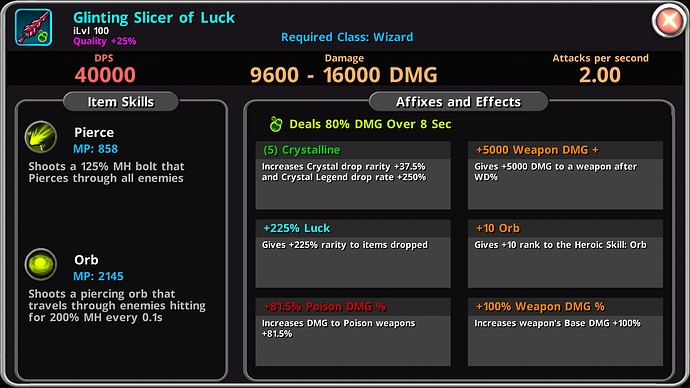 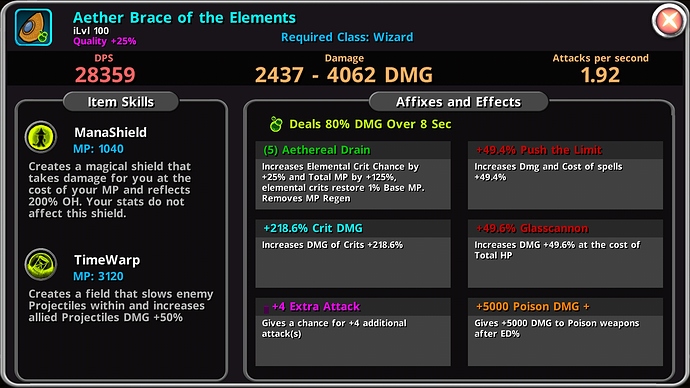 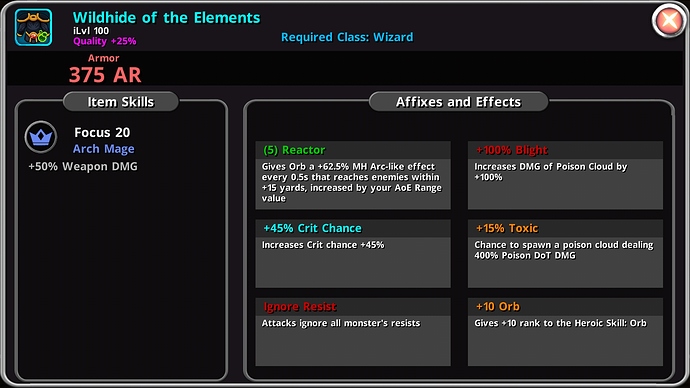 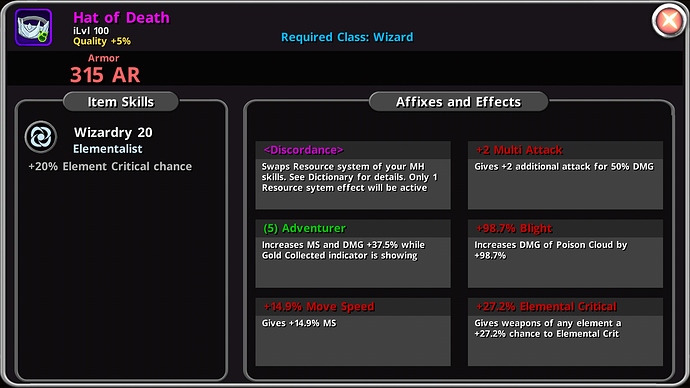 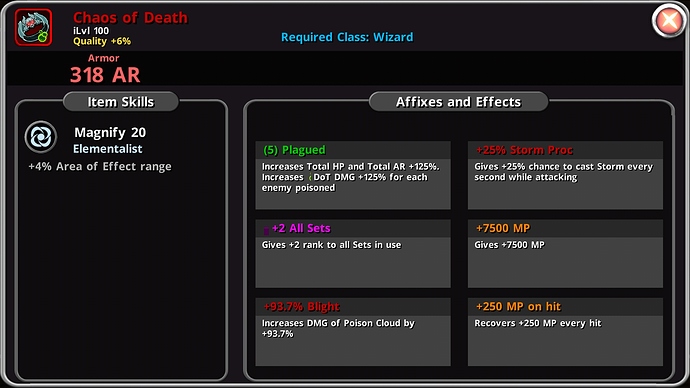 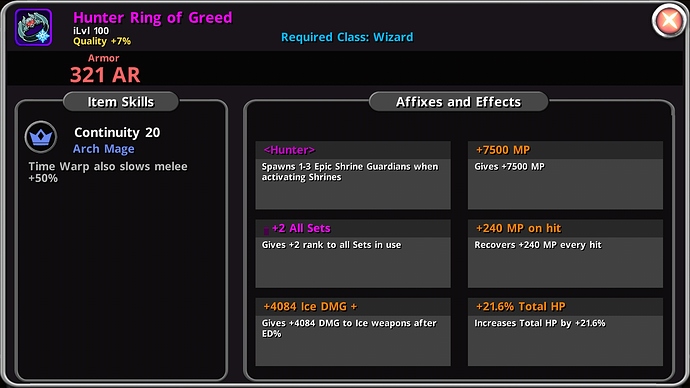 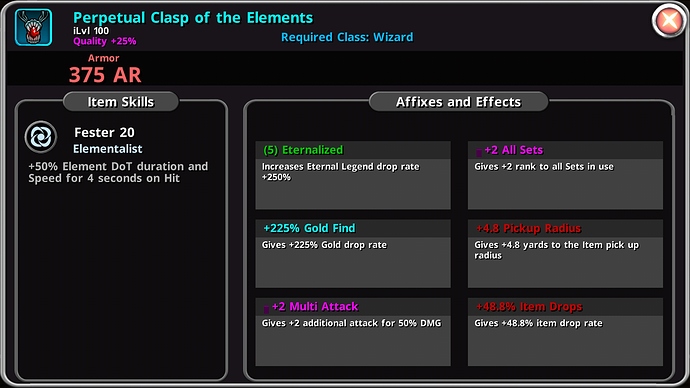 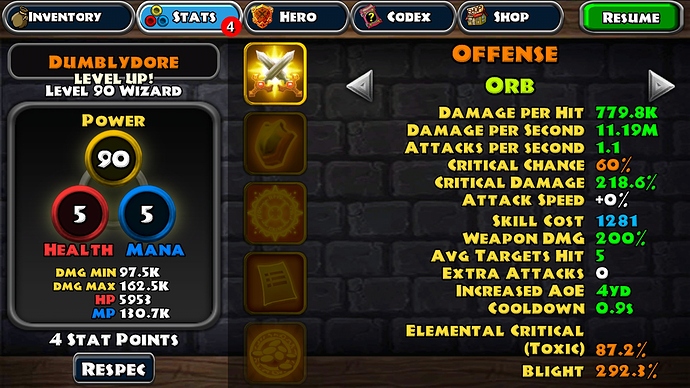 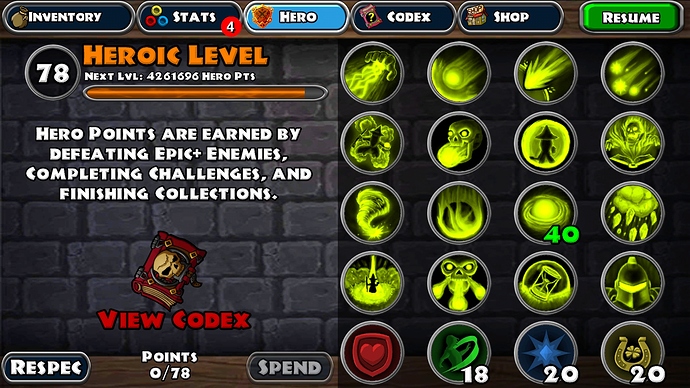 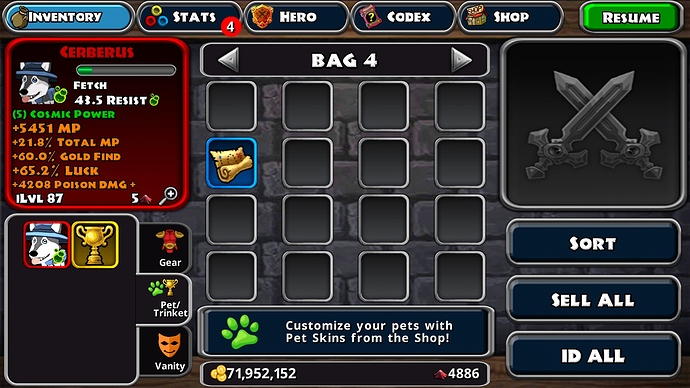 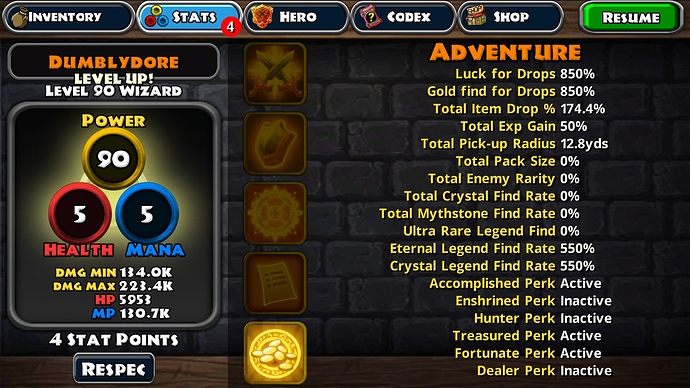 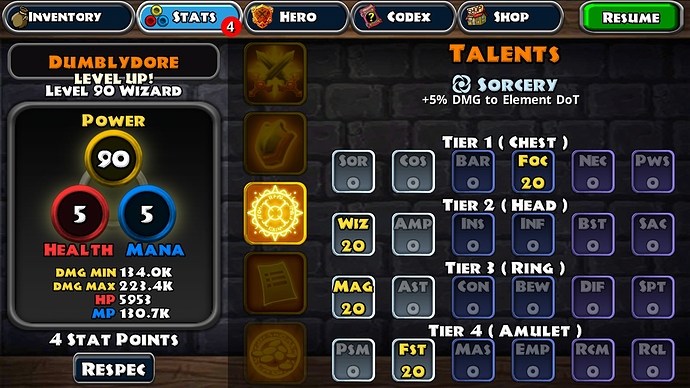 . I can clear fairly fast and easy up to flr 500. But the issue is that i cant feel the mp steal of aether drain, 1% hp on elemental crit. If im ryt it shud regen 1.3k hp per elem crit ryt since i have 130k mp. Or am i wrong? Im still lacking 2 legend item drop affix and my survivability is still lacking coz i cant feel the aether drain. Any suggestions for improvements? I feel like i over did d dmg since monsters from flr 500 and below easily die with just 1 orb, maybe i can sacrifice some dmg affix for item drops and survivability?

And lastly base on my current set up, which wud be better focus talent or sorcery?

Thanks again in advance

Btw thanks to this reactor build im really enjoying it, specially the arc effect which fires laser everywhere.

change the Element of your Hunter Ring to Poison.

it looks like MP Absorb doesn’t work with Manashield.

Sorcery would be better with a Poison Build than Focus.

take that Toxic off of your Robe and put another +250 MP on Hit. remember, your Skills are using up Mana faster than it is being replaced at the moment. also, you only have a chance to get Elemental Crits, and after 5-6 Elemental Crits, enemies become resistant to Elemental Crits. you already have a +73.2% Elemental Crit Chance without the Toxic affix. hope this fixes the MP shortage problem.

Woah i didnt know that part about elem crits. Anyway i chose barrier cos i feel like my dmg is enough already for farming m3 flr 500 helps a lot when im mobbed, it gives me time to runway for safety.

Uhmm do u know anything about prismatic mechanics? Im planning make my build fun to watch by making the orbs and laser different color through prismatic, but im wondering about elem crit dmg when using prismatic. As u can see i have 3 blight legend affix, when prismatic proc a different element, does the elem crit dmg (blight) automatically changes to other elem crit dmg like blistering , frostbiting etc.? If it does it wud be great but if it doesnt, im willing to change the other 2 ECD to other elements using calcites.

%ED, +ED, and Epic Elemental Crit all need to be the same Element of your Weapons, even if they are on other items. if you have Ice%, Ice+, and Freeze on your Chest, but your Weapons are both Poison, you don’t get the benefit of those Ice affixes. even if you use Prismatic. the Element Set might work differently, but I haven’t tested that out yet. but if your weapons were also Ice, and you use Prismatic, then not only do your ice attacks get the boost, when using Prismatic, since the base Weapon is Ice, all of the Elements the attacks get change to get the benefit of the Ice on other weapons. Legend Elemental Crit is like using all the Epic Elemental Crits in one Affix. doesn’t matter what Element the item is. this is good for if you have both weapons with different elements, like fire MH & ice OH.

with Ascendant Set, I believe that the weapon needs to be Arcane Element to get the benefit of the lowering of the enemies resist. I just consider ‘other resists’ to mean any resists the monster might have. with Weaken, this is a powerful combination.

Hello golem good day to you

So basically the legend affix ECD blight on my items will only affect poison elem proc of prismatic and not other elements. Noted.

And acsendant set needs ur weapon or attacks to be arcane to be able to get the benefits of reducing enemys other resists. Noted.

that reducing other resists isn’t all that important. most Builds with Ascendant use the Element you want to see the most on their Weapons, and use either Ignore Resist or Weaken. if you really want to make use of the reducing other resists, then you would use Arcane Weapons with Weaken. when adding Arcanist Set, then you absolutely need to use Weaken.

the way Weaken works, it becomes even more effective when taking advantage of the reduce other resists part of Ascendant.

Hello there, im sorry im back again with a bunch of questions. Pls bear with me again guys

Well guys here it is…

Oh , yes your right , its hard for this build to include CB and crushing flames. Its loaded as it is.

Hey, it’s about 1week i started the game, and i would like to know if this build is still possible and good. Thanks for replys

the Build is still useful as is. the more recent posts are with new players asking the same question and replies discussing some minor changes due to this being an older Thread and there having been some updates to Dungeon Quest since then.

this Build is for Wizards, so if you want to use Rogue or Warrior, you might want to look through the Codex and see what Legend Items you can get on lower floors to get an early start. some of the ideas used in this Build can be used for the other Classes, but would take a little research on the players part to make it work properly.

Actually i know a bit of the game, i’m level 71 and i only have the Zeus of the Blessed, trying to have the Orb+ buff on it, but it’s hard. Ok ok, thanks for your reply

By the way i am actually using the Zeus of the Blessed the red one in image. And i just dropped the green one. And i would like to know which one is the best 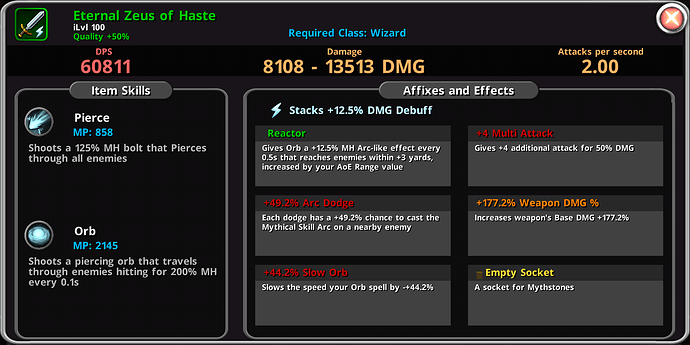 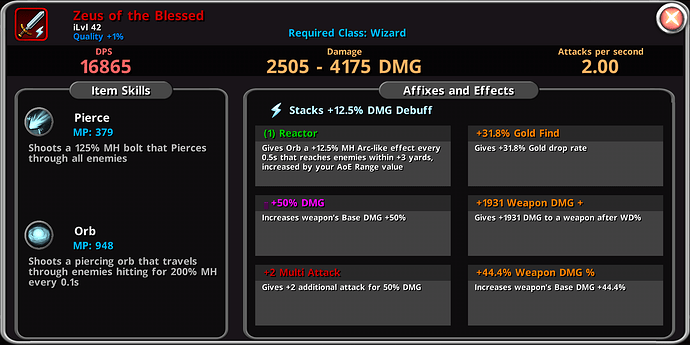 ow, just find that it was impossible to remove affix on green item, rip

Legend Items (Red) are found with an Item Quality of -10% to +10% and can have the IQ increased to +25% using Emeralds. with a lower IQ and affix values not doubled, Legend Items are weaker than Eternal. the strength of using Legend Items is that you can use any Crystal on them to Craft/Edit them however you want, which can make them stronger than an Eternal Item.

using an Eternal Item or two in a Build is good if most or all of the affixes are useful in your Build, but the flexibility of using Legend Items makes up for Legend Items not being as powerful as Eternal Items.

Yes ok, i understand thanks for this info

Do you have a Discord that you can give to me ? To contact you for some help, i’m not a big fan of forum

haha, no problem. one of my first Eternal items was a level 1 Eternal Golex’s Gauntlet. I used it for a long time until I learned more about the game.

after reading about how hard it is to craft an Eternal Item in the Forums, I decided to not use them, just convert them to Ultra Rare Crystals (was converting them to Dust, but I was still a Noob then). there are some Eternal Items that I have seen that look like they could fit into some of my Build ideas, but I haven’t gotten that far with actually using them.

sorry, I don’t have a Discord Group that I am a part of. you could always PM me, and I will help if I am able to.

@kowiz i learned the game following this build. And it works. Its cool too, casting stationary orbs which shoots lasers haha

one thing that makes this build so powerful is the overlapping Toxic Clouds doing DMG to monster mobs.