I cant upload my character in dq please help 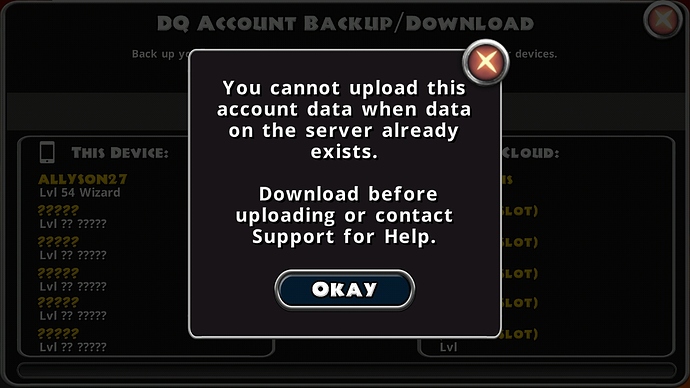 I had this problem. what the message is telling you is that either from this device or another device, you saved your game in the DQ Cloud. when I deleted the game from my device, reloaded, and started playing, then tried to save the game in the cloud, my previous save before I deleted the games is still in the Cloud. it wouldn’t let me save the game I was playing and wanted to save. you will have to download what is in the cloud, and go from there. that level 54 wizard you have is going to be lost, unless the Developers delete the information on the cloud. that might not be a good idea, but only a Developer could explain if it is a good or bad idea. this is kind of a security feature, as you need to put in your password when you use a new device, or delete/reload the game. makes it harder for someone to take your game and start their own characters without a lot of work deleting all the work you did and starting over. most people who take other players games do so to get a game that has all the hard work done already. with DQ, the only way for them to save all your hard work is if they have your password. if they don’t, and the game they took crashes, they lose all your and their hard work and have to start over.
hope this helps.

I think I took care of this issue. there is no need to lose your character data, the system is just alerting you that you have data on the server that you are trying to upload over.

I believe that I reset this players account for them last night so they could upload.

thank you @tdaniel. when I first started playing DQ, I figured out what the problem was, and later when I got onto the Forums, I learned a little more about it. I am sure he could keep his character, but as you said, the system was letting him know the new data couldn’t be saved over the old data that was already there.
example: I saved my game on the cloud yesterday. later today I will save my game on the cloud again. the new save will overwrite the old data, as it should.
but if for what ever reason I deleted the game, and reloaded it, and started playing, then tried to save it, I will get that message that @Assiral posted, because the data in the cloud has priority over the new game I started. I did that a few times while learning to play DQ and figuring out how to care for my device properly. I am not a good tech type person.

now I know that if I delete and reload, or get a new device, I’ll download the saved game from the cloud first before playing, so that I don’t waste time.
in the end, a Developer fixed the problem and brought happiness to another player.

One question? What if i accidentally uploaded new progress over my old progress in my account. Would there be a way to restore it. I always feared that whenever i were on a new device or my game reset for whatever reason.

No. We do not have a back up system in place that will allow us to “roll back” a players save game.

This is something we know we should have and we have already made progress to provide this for our follow up game.

Good to know. As I thought

@CuzegSpiked it depends on what you mean with uploading new progress over old progress. if you mean uploading your current gaming session over the previous one, that is what the Cloud is for. if you mean about a character you started after reloading DQ on your device, or on another device, and before you down loaded the saved info from the cloud onto your device, you will get the message posted in the original post.
the reason I know this is when I first started playing, I kept wanting to start over by reloading the game, when I only had 1 character slot. yes it was silly of me to do things in this manner, but I got that message a lot. I learned that the new character I was using couldn’t be uploaded into the cloud, because the character I had saved from before I deleted DQ, and reloaded, was still in the Cloud. eventually I realized that the save in the Cloud needed to be down loaded first, before I started playing again, because the Cloud prioritized my old save with all the loot I had acquired previously over the new save that might or might not have the same loot. at one time, I had gotten a character up to around level 60, and tried to save it to the cloud, and it wouldn’t let me, I got that message seen in the original post. so when I down loaded from the Cloud, the down load overwrote the level 60 character with my original upload. yes, I lost a lot of time and effort learning this, so I don’t do it anymore.

@tdaniel can you clear my saved data on cloud please? I want to get a new phone and my son’s characters are on my cloud so I can not upload mine.

yes, just send me a DM with your dq account email address so I can reset it for you

Try to upload your save game data now.

Can you try to upload now? It should allow you to upload.

Still cant upload,
My DQ account email is : dimdimzdisini@gmail.com
The same email i used for this forum account.

There is nothing I can see on my end that would be preventing you from uploading your save game.

If you are having an internet issue (bad connection for example) that could cause the issue. Looking at your account now, you should be clear to upload.

if I delete your account all of the data on it will be gone.

I am fine with that