I got this angelic item on m3 474 and need help 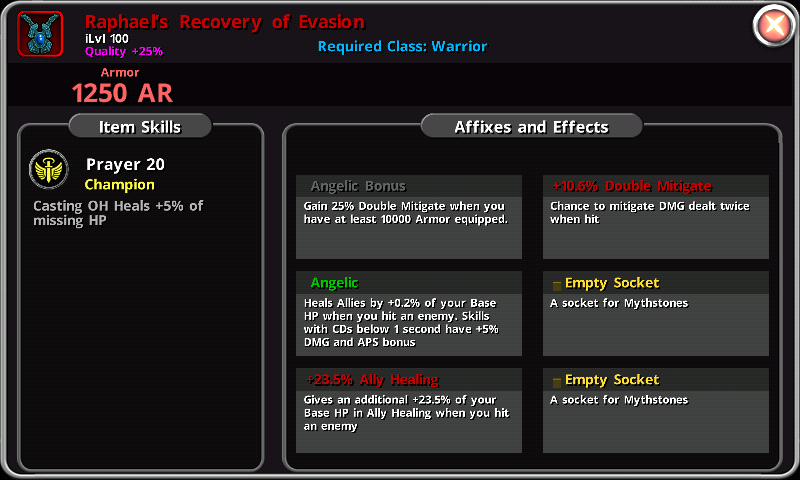 Do i ruin the item if i remove angelic to make it into a sanctuary mythic? And how does the angelic bonus work? Do i need a total of 10k armor or i need cryastal armor on all 6 gear + max armor (does those count)?

And how does ally healing work? Cant find the word “ally” any other place than enemy affix. Does ally mean hireling/master? Or only summoned minions? Sorry that i dont know these things, even tho the effect is right ahead, i dont understand the very basic consept of “ally”.

Also if i get the angelic bonus, can i remove the regular double mitigate?

My warrior is way more dps than me, but he is starting to struggle against the “explosive, bewildering” etc mobs

Ally Healing should Heal your Hireling, or your Hireling Heals you, when attacking. not sure if it Heals Minions, you would need to test that.

for the Bonus, you need 10k Armor on your Items, minimum. also, the Legend affix will give you 50% Double Mitigate.

Angelic Set can be rolled with Amethyst, so you can put it back if you still want it after you put the Mythic on the Item.

your Warrior needs to go Block & Sanctuary, with some Dodge, if you don’t go High Block or +100% Block defense. 50% Double Mitigate with +60% or higher block with Sanctuary should be a good defense. if not, back to the drawing board.

Ok i got 30% block now from a crystal shield-orb, but the biggest question is this, is it even possible to get armor from topaz on wizard? Just spent 40 topaz no armor

your Warrior needs to go Block & Sanctuary, with some Dodge, if you don’t go High Block or +100% Block defense. 50% Double Mitigate with +60% or higher block with Sanctuary should be a good defense. if not, back to the drawing board.

Also i understand nothing of this sorry im noob

Lets just slow this down then.

Double Mitigate - when an enemy hits you, you’ll reduce the incoming damage using your armour and resist, there is then an X% chance that you’ll reduce the incoming damage again by your armour and resist.
For example, the enemy hits you for 100’000 damage, you have effectivly 70% damage reduction from your armour, you now take 30’000 damage. But with double mitigate, you now have a chance to reduce that 30’000 by 70% again… you now only take 9’000 damage.

Next lets go over the more commonly used damage reduction.
Dodge - you have a chance when struck to take NO damage at all.
This is pretty easy to get, you always have 10% base dodge, thats just free and built in.
Dexterity heroic gives 10% dodge at +20
Put an epic affix of +10% dodge on the pet,
And a crystal affix on any gear for +30% dodge.
You now have a total of 60% dodge
(If you use epiphany, you can change every gear nature to Evasion using Beryl? crystals for 1.5% dodge each, totaling another 9% dodge)

Block - same as dodge, you have a chance to take NO damage at all.
Block can only be put on the OffHand (OH) item, unless it is naturally found on a legendary warrior item.
For example, Indra’s Boon is a legendary item that naturally has Block on it. If you buy enough Indra’s Boon, eventually you’ll find one with a crystal block for +45%
Put an epic affix of +15% on your OH item
And as a warrior, if you use a shield, you get 10% block for free (this is only for warriors, and only when you use a shield)
Thats a total of 70% (Epiphany can raise the cap from 60%)

Now… without Epiphany, thats 60% dodge, and 60% block - effectivly 84% chance to take NO damage at all.
Add on Sanctuary mythic to your amulet, and on that 16% chance that you do get hit, you’ll survive!

Now we use the Indra’s Boon chest from earlier, but this time use that with a crystal Block% on the OH item too

Hope you understood all of that, i tried to explain it as best as i could

Hope you understood all of that, i tried to explain it as best as i could

Thank you for explaining

There is so much theory to this game that i feel like im going to school again.

the Epic Armor is +2500, it’s just that there are a lot of random Epic Affixes. Topaz only gives you 6 choices out of like 50+ affixes (might be more) so it might take awhile. there are some Warrior Items with a Legend +5000 Armor, so you would only need 2 items with that, instead of 4 items with 4 Epic Armor. the Legend Armor can’t be rolled with Ruby, you can only get it as Loot or find Items in the LegendEx and use Dust.

lastly, Bulwark lasts for 5 seconds, then you go back to 81% Block until you Block again, then you have the 100% Block for 5 seconds. with Sanctuary, that’s a good defense. I think that if you are always Blocking, you should always have the +100% Block, but if you go past 5 seconds without getting hit, then your Block goes down until you get attacked and then Block for Bulwark bonus again for 5 seconds.