So after getting the worst eternal pet ever I thought my next eternal pet has to be super awesome. Well I didn’t want to wait that long so I decided to roll an eternal instead 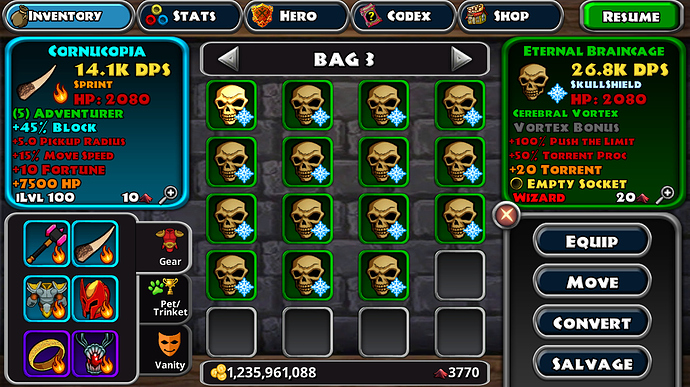 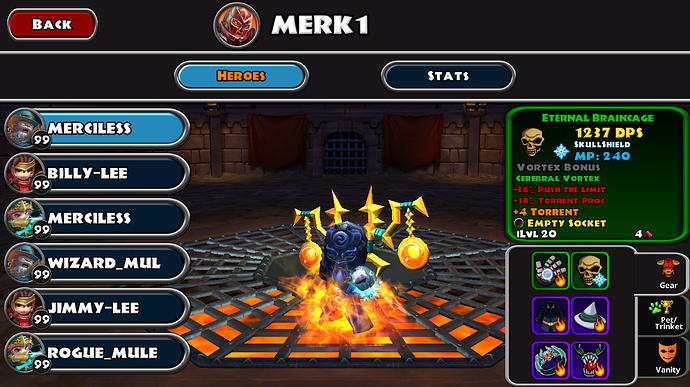 Hmm only 4 torrent tho. Max is 6 on eternal skill epic affix right?

It just looks perfect on level 100, but on level 20 you get truth revealed, mwahahahahaha.
Very cool acquisition.

i checked 5 other braincages with 20 in vortex and none of them were higher than 4 in arena either. I know that on eternal pets a 20 in skills translates to 6 in arena but haven’t seen it on armor yet. I’m trying to reconcile the math in my head on the scaling. A 20 in PvE is at most 19.01 rounded up to 20. So what multiplier would cause a range of 4-6 in arena from 19.01 to 20 in PvE? To me it shoudl be at most a 1 point range in PvP but hey i’m nont a math guy.

I’m confused lol and I’m the one who calculate. Since when do we get decimal hero points?

I do know that strength and other legend affix hero points like Intelligence do have decimal values but it epic affixes or so. That’s why it’s harder to get 3 strength when you have 1-2 strength in PvP . Strength is amazing in PvP.

What I mean is talent and skill points are shown as whole numbers. So in PVE strength can be shown as 10 but in reality it is 9.xx rounded up to 10. This is important in arena because the real number is what is scaled down so it is either 2 or 3. If epic affixes like torrent follows this logic then a 20 in PvE is 19.xx rounded up. If this is the case then in Arena it should scale down to be anywhere between 4-5 or 5-6. But people are saying that a 20 can be scaled down to be as high as a 6. We know that it can be a 4 so that means the range is 4-6 when scaled down. What I don’t understand is what the scaling multiplier could possibly be for 19.01-20 to scale down to a 4 5 or 6?

And yes 3 strength in arena is amazing. I have forfeited tons of arena matches recently to roll 3 strength for 10 items so far for pvp sets.