I need some help with warrior pvp build

So i was never really into warrior but i decided to give it a try. I was thinking about Defiant and all the HP affixes like VT, FG, Battle Mage(?), Plagued(?) and CV, but im not sure how it should be build and how the overall gameplay should look like.

Oh and also im not sure if its good time to start something from nothing, i mean any news about update release?

I made a full tank warrior build somehow similar to what you made but i invested too much defensive affixes that i don’t have slot for offensive affixes…the solution i came up with it is to have Mirrored and Redirect mythics then have some block, dodge affixes…get one Reflect DMG legend affix and amplify it with Electrified set +5…

The offensive part - i was thinking about PTL affixes, barbarian(?) and maybe momentum

Hey guys. Im a fan of this game and I think its been couple of months since I start playing this game. By the way I want to share a build on you guys. I created many Set Build but this one I think is the best. 2 in 1 in just 1 set. What do you think.

Ok lets start [image] Ok so this how it works... Literally it is called Running Man build because it is inspired by the Running Man Challenge and the GreenGarden of @cronos4321. . This Set can 1 hit an Eternal or Legendary Boss at Floor …

You benefit less from ms+momentum.

What would u suggest then?

Demonic, Living force (if you use projectiles) and some other great affixes.

if you use momentum set, your OH must be horn with shield wall proc

you can use c vortex and terrashaper for your defense with your talent also.

prayer or bloodbath in your amulet.

Is demonic really worth to use? And is this pet good enough? 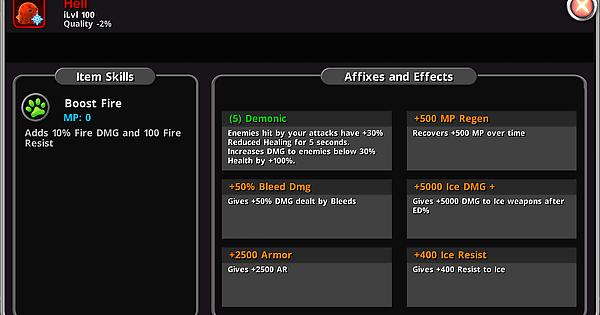 It’s an interesting pet. But Demonic worth using is up to you. If your main goal in PvP is high damage , then yes. But if you’re a tank build who uses Battle Mage with HP and damage reduction, then no need on wizard or warrior generally or rogue.

Demoic is a good new affix for both pvp and pve.
In pvp,demonic incease total damage17% or so,the most important advantage is it can anti regen type build.

That did play big part in me defeating paradox. Demonic ftw!