I want to put bombard but should i wait for mutiny gauntlet? 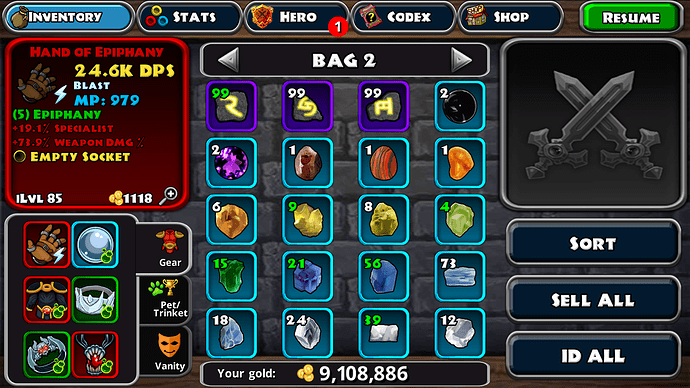 You can use that. There are some new kickass items. That’s one. Go for it, man. You can switch whenever.

and what does increase all stat caps by +5% mean?sorry noob here 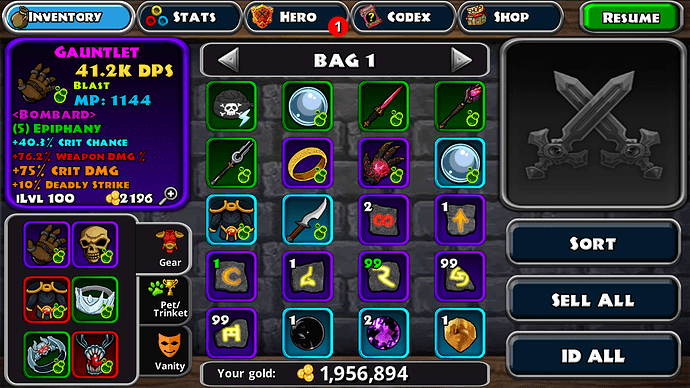 Yeah. You can reroll the WD with a diamond if your want it higher. But, for starting out, it’s good.

Yeah, you’re right. I was actually just getting on to correct that. Lol. I often type/talk without thinking. I realized shortly after that that didn’t make sense. Thanks.

I don’t actually know… I don’t have the patch yet. It was a question

I think your method is correct. A 5% increase directly to 650% is pretty much useless.

what offhand weapon is good for pvp? orb or skull? vanish or enigma?

Vanish and Enigma are both very good PVP mythics. That is your decision. Vanish just got a big change that makes it better and worse. The decision between Orb and Skull is yours as well. In my opinion, Skull is more for PVE.

ah ok tnx so u suggest orb and enigma for pvp sir? ^^

For PVP, I would choose orb. However, I believe Enigma is basically Orb’s Shatter. So Vanish would be your best bet. I wasn’t saying Vanish is bad. I LOVE Vanish. The Stealth time just got reduced to one second (which includes a damage boost, and 100% dodge), and a blinding aoe was added. Like Overload and Stealth in one skill.

orb and vanish then? thank you sir ^^ i’ll try it on pvp

and one last question sir, is it possible to obtain seven deadly sin or defiant on amethyst sir?

ok thank you very much sir, appreciate your help ^^

is it possible to obtain set affix momentum from amethyst even if the item is for wiz? or should i change the item to warrior?