While you can play the game totally free, sometimes you may want to purchase from the store. I’m going to prioritise and needle down the list of purchases to the top most useful and economic for new players. My number one is extra character slots. Number 2 is extra storage capacity. Shared stashes are ace for transferring items between characters. And joint at number 3 Are gold and monster boost purchases. Gold is useful for getting crystals by converting eternal or legend items into crystals and also paying the cost to ascend. Monster boosts generate an enslaver on every floor. Extremely useful in hunting for legend or eternal pets. Guide over.

The basic game mechanic is that if you go hunting for items solo then most of the items that you find are in your character class. If you have three different characters then you can do 2 v 2 monsters and swap hireling. Items are shared between the main and hireling classes and are given to the
relevant class ( e.g. Wizard gets wizard stuff and rogue gets rogue stuff etc ) But every class has unique items that can be useful to other classes when you jasper it ( change an item from one class to another ). Extra character slot purchases remain my number one purchase. It’s cheap. One wizard, one rogue and one warrior. Stop there. Everything else is overkill. A jasper is just a gem you can find that changes a warrior item to a wizard or rogue item.

Oh yes auto map reveal is another good one. It saves you from getting frustrated. Thanks @Skaul. I had forgotten about that.

I think my first purchase was a Character Slot, and second was Auto Map Reveal. on lower floors, buying a Map for every floor isn’t too costly, but the cost goes up for higher floors and can get very expensive. it’s about 125k for floor 505 when farming for crystals.

I got a Google Play Store Card a few years ago and got a few more Character Slots, more storage & the Crystal & Myth Stone Storage, and some vanities recently. waiting for enough Opinion Rewards to get the Night Blade Weapons.

Nice choice. It will take you ages to spend that gold 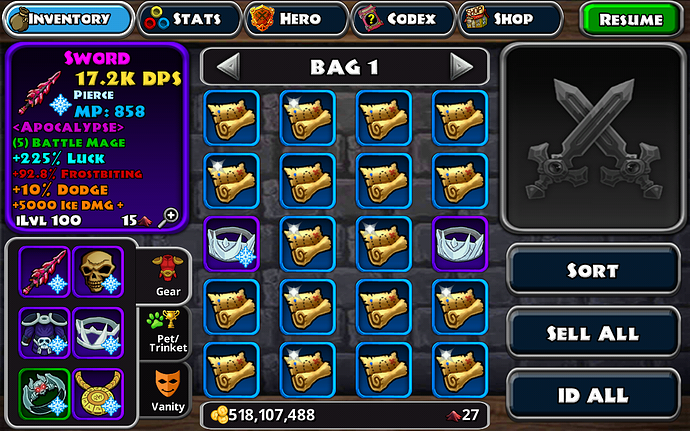 Converting eternal items into ultra rare crystals cost 500k . That gold will buy a hell of a lot of Crystal

and pay for all ascentions etc

the past month or two, I have been buying Crystals & Myth Stones in the Shop as part of my Farming Build Duties. my Gold has gone from 500+ million to 320ish million. a big part of the loss of Gold is from buying Very Rare Crystals in the Shop and converting all Legend & Eternal Items to Crystals, which costs lots of Gold! now I just convert Legend Items to Dust for now to build up my Gold Reserves again.

once again I am saving up loot for another Build Idea, but this time I think I can fit +200% Item Drop on the Build, and am thinking of adding Eternalized so I can get Eternal Maps more often for more & better loot.

Just what I need, I was about to purchase monster spawn boost

my memory sucks when it comes to where I am on the map, which is why I got the Map Reveal, so I don’t get lost and know where I haven’t gotten the loot yet. also, speeds up going to the Cartographer when you have a hint of where he is at.

And the hint is the cartographer is in the opposite Compass direction of your starting place on a map ( e.g. Start at East then go west, North then go South , NE then go SW )

there are a few times the Cartographer is almost next to the starting point, but that doesn’t happen very often. 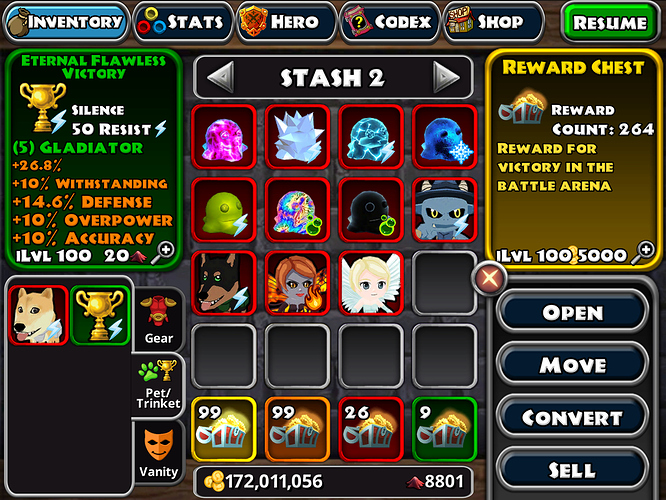 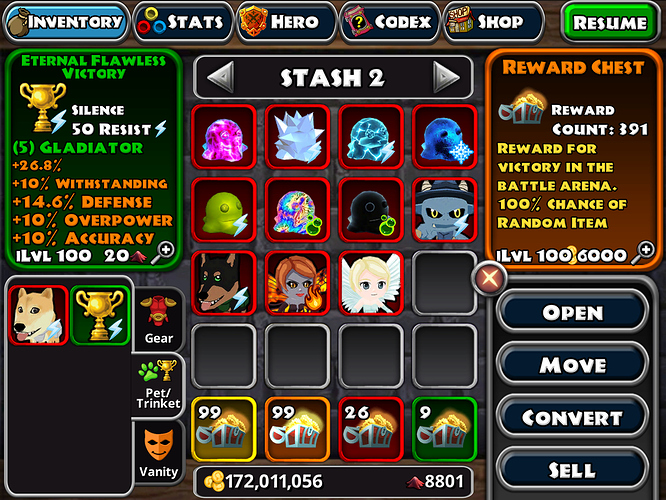 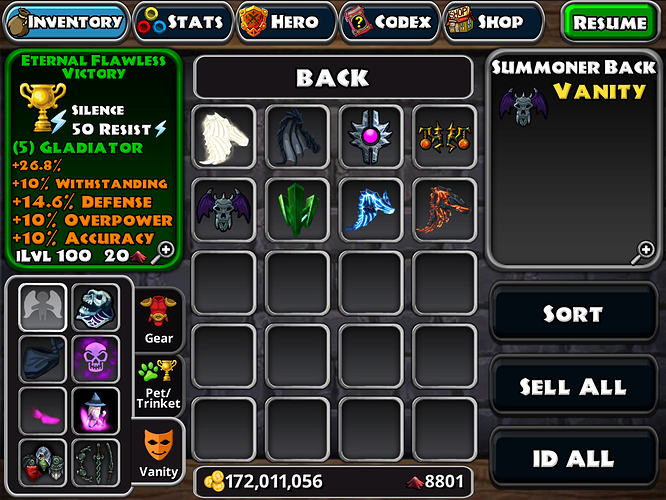 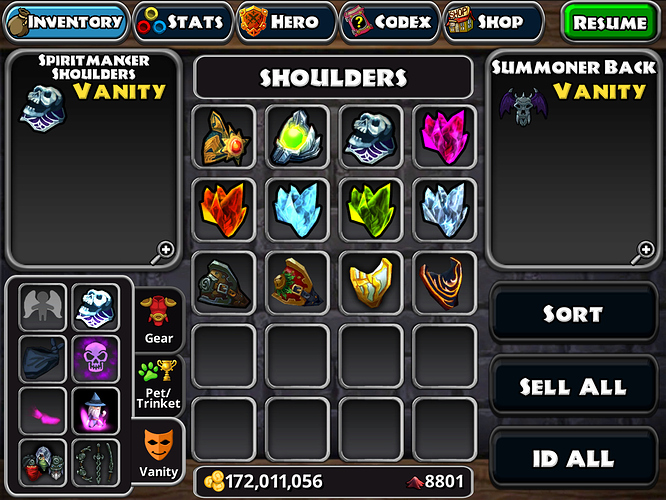 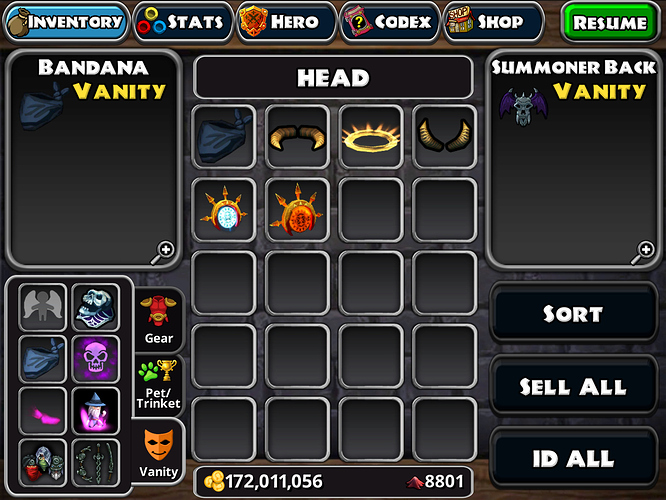 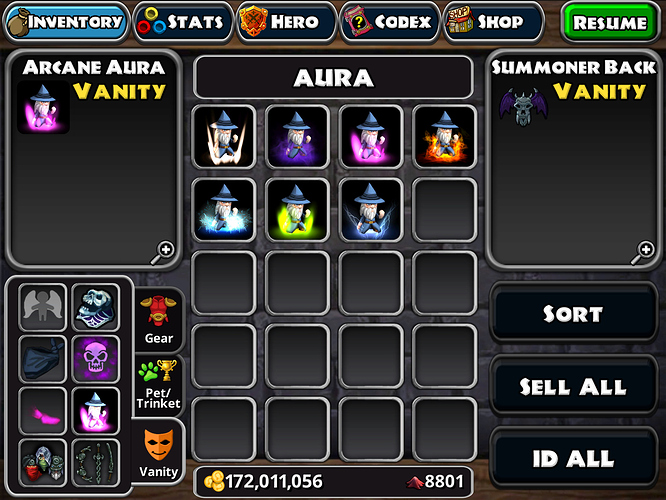 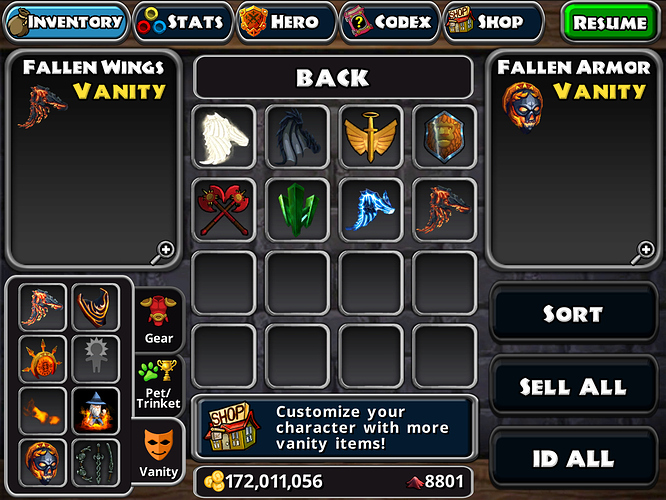 Since there is not a new vanity in the game for ages, still have every one that the game ever had

, since i play form season 1 arena, and spend more that 100 Vbucks on my accout, mostly cartographer booster, feells good man have this, i have a cousin that plays DQ since the last moths, he still dont know that i play this game, his dream is to reatch ethernal league to get a vanity, if he knows i have all of them, im a dead men

, And A dead men whyd no account, becoz is a crybaby and whant everything a have, becoz of that, i will never, ever, say anything to help him, i will pretend that i Never have seen this game in my live