In need of suggestions! 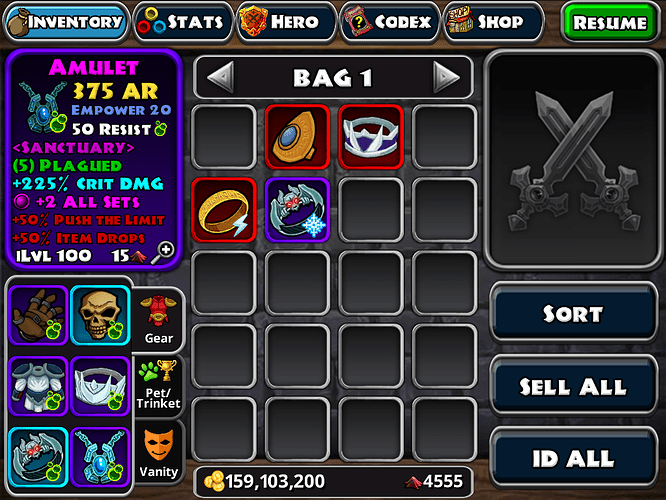 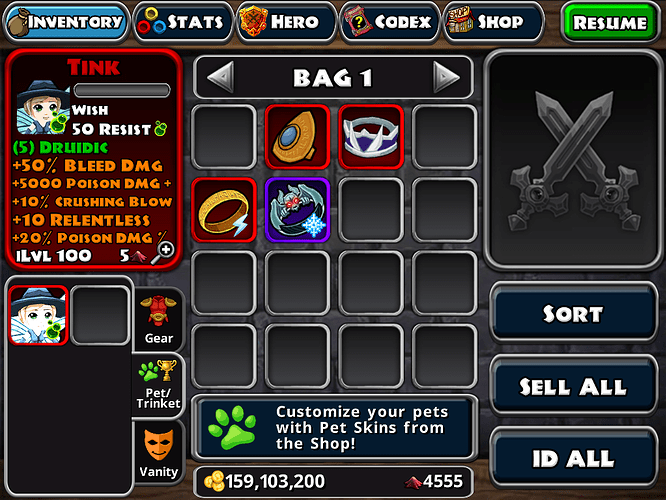 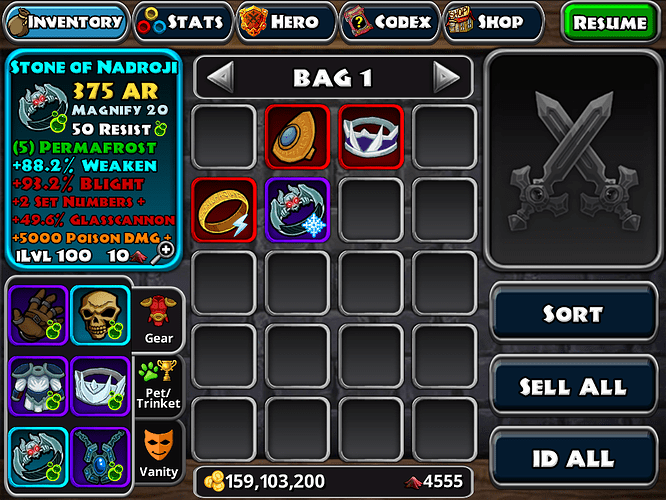 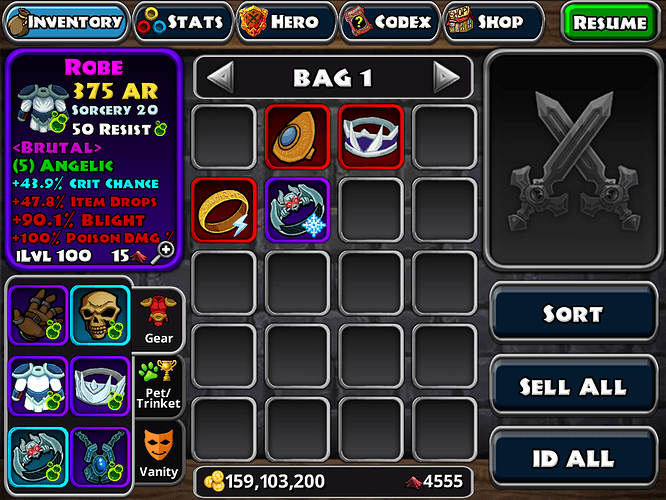 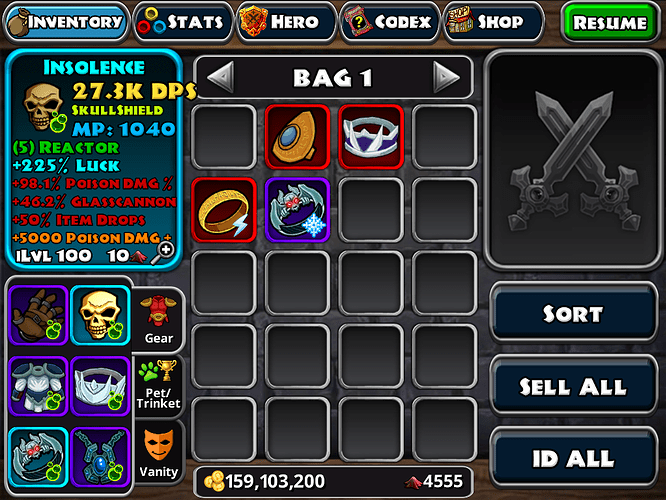 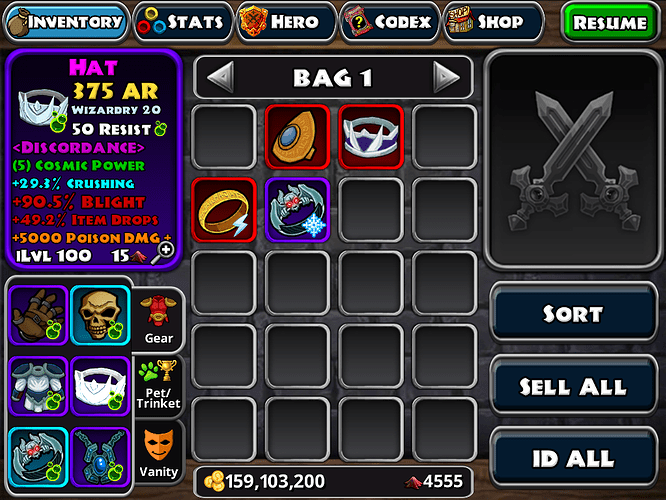 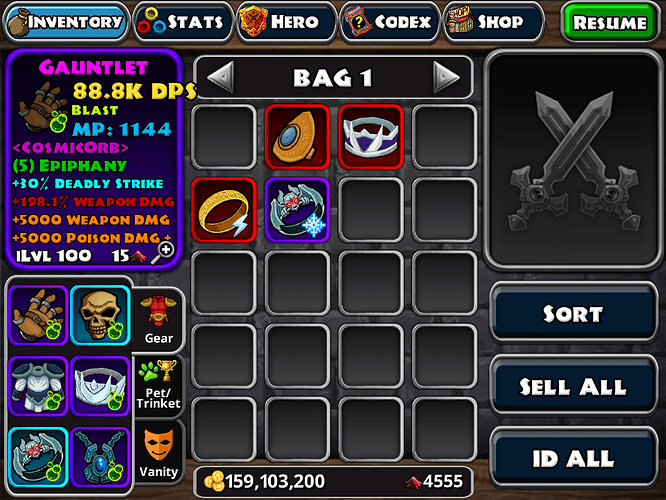 This is currently my hireling’s build. I have maxed farming stats. I’m using a Rogue main which I use for vaulting and taunting around enemies completely devoid of damage.

Can I get some suggestions on how I can further upgrade the damage of my hireling? I’m farming between floor 200 (for diamond crystals) and 600 (for epiphany and other shts).

do you have Scalp or something causing Bleed? I notice you have Bleed DMG on Tink. might think of switching Brutal to Ruptured, which gives +50% DMG to Bleeding enemies instead of waiting for a Deadly Strike for Brutal to be useful.

if you have a +2 All Sets MS, switch out your Stone of Nadroji for something with +100% ED instead of the +5k ED. same thing for the Hat & Amulet. the extra DMG from the ED%, you can take off some of the Flat ED+, and move some of the Ruby rolled affixes around. I guess you would have to move the item drop on Amulet to Gauntlet instead of the Flat Poison+. you lose +15k Poison and gain +300% Poison instead, with +50% DMG on Bleeding enemies instead of 3x Crit DMG with Brutal when you Deadly Strike.

Thanks for that suggestion. Actually the set I’m currently using is from my previous set, I just kind of replaced some affixes for it to be a farming build. I had limited crystals at that time so I had to make the most of out it. Nonetheless, I’ll try to take on your suggestion since I was able to farm a good amount of resources now. As for the pet, I’m using it because of the set affix and didn’t notice the bleed affix tbh. Also, I don’t have anything that causes bleed on this hireling but I do have on my main.

In regards to flat poison damage, I read somewhere here that it’s kind of needed even if you stack on elem dmg%? I’m also trying to keep the PTL affix on the amulet and I can’t remember seeing any amulet with such affix together with elemdmg% but I’ll try to check on that later.

Lastly, is there any other good set affix that fits the poison build which I currently don’t use? I want to replace Permafrost (or does Permafrost work even on non-ice builds). I’m using it for the MP absorb mostly. Also the Angelic affix, I kind of want a replacement for it if you can suggest any.

well, move that Item Drop to your MH anyways and replace it with Blight, it is the next best thing after +100% Poison. that way you can keep the Amulet and boost your Toxic DoT DMG.

may as well keep Angelic, since it is increasing the DMG of the Special Skill that Discordance switched to Primary Skill.

haha, totally didn’t think of the Permafrost not belonging on a Poison Build! maybe replace it with Adventure Set? more movement & DMG, but only when Gold Picked Up Indicator is showing. if you are having problems with killing bosses fast, maybe Demonic? just took a look in the Codex, and those are the best 2 options I can find with the Build as it is. you would have to do a new Farm Build to use almost any other Set.

the way DMG works is in this order: WD%, WD+, ED%, ED+. ED+ is figured last out of these four, so is least important in a Farm Build.

I know it means getting different items for the Legend affixes you need and spending more Crystals. even just 1 ED% & 1 Blight, and maybe Dodge for the other spaces for more survivability, is better than all the ED+ you have. just thought of replacing your WD+ with Blight for another +100% Toxic DoT DMG. might be close to Green Garden Build for DMG…maybe…probably…not sure…

switch the Bleed DMG on Tink to Dodge, and keep the 5k Poison, unless you can think of something better for defense, or Attack Speed or Cool Down. or Deadly Strike!!! 40% better than 30%!!! or Gold Find?

Once again, thank you for the wonderful suggestions. I actually thought that ED+ was calculated first before ED% since the Green Garden Build has ED+ on every piece. Will sure do switch those with Blight or I might need to find other items that contains ED%. Maybe incorporate Barbarian as well for added damage if I have the space.

For Adventure set, does it work on hireling though? And how do I replace an affix on a pet? I thought we can’t do that

Crafting Pet Affixes: as of Patch 3.0, the first 8 Crystals and Topaz can be used on Pets, but costs 5 Crystals. if it takes 5 attempts to change your Pets Element from Ice to Fire, it would cost 25 Calcite. Crafting Pets can get real expensive in Crystals.

Green Garden Build: haha, you are right, Poison ED+ on all items. this was originally posted in 2015, and there have been many changes since then. it looks like you could replace most if not all of them with something else for even more DMG, and to be effective on higher floors. he said it was doing good on floor 700 back then.

WD% increases Base Weapon DMG. WD+ is added after WD%. doesn’t matter what the Weapons Element is, and they only affect the Weapon they are placed on.

ED% increases DMG of Weapons with the same Element. ED+ is added after ED%. these can be on any item and might be on Pets also. if all Weapons & Items are the same Element, like Fire, then both Weapons DMG is increased by the ED on any item.

Adventure Set on Hireling: don’t know. stick an Adventure Set on your Hireling and see if it works when the Gold Pick Up Indicator is activated. or does someone know and want to share?

As always thanks, really appreciate the in dept analysis and explanations! As for the Adventure set, I went for Demonic set on my ring for now. The orbs crunches epic/legend/mythic bosses’ hp in just a few seconds.

I also tried replacing affixes on a pet and was amazed. Back then it wasn’t possible but I guess many changed during my years of hiatus. In regards to that, after I changed the affixes, I noticed that the newly rolled ones didn’t take on the maxed rolls. Is it possible to roll them to max values using diamond? If so, then it renders the “Save a Pet” feat useless since you can just use diamonds to max out the affix values instead of completing the feat to upgrade the affixes.

sometimes when you roll new affixes on Pets, they will be max, but not all of the time. it would take forever to get all affixes on Pets to be max with Diamonds, since it rerolls all of the affixes, and who know if you will be lucky and have all of them Max with one roll? better to use Fluorite instead. if you run out of either of those, the only other way to improve your affixes on Pets is defeating Enslavers and finishing the Find Pet Feat, which improves the affixes on Pets. @Mr_Scooty has a cool Pet Farming Build that can speed up this process, if you want to go that way.

Crafting Pet Affixes 2: Calcite, Angelite, Quartz, Diamond, Larimar, Kyanite, Sapphire, Fluorite, & Topaz are the Crystals that can be used on Pets. Calcite is the only one that can be used on Eternal Pets. it costs 5 Crystals per use. Diamonds are better used for Legend & Crystal Affixes on your other items, unless you have a few thousand of them. at 5 Crystals per use, I went through 3k Larimar just to get Stealth on my Pet. think about it, if it takes you 30 attempts with a Diamond to get all affixes maxed, that is 150 Diamonds. but Diamond rerolls all affixes for random values, so if you got 4 maxed on a Legend Pet, and one isn’t, are you going to take the chance with Diamond to reroll all of them with Diamond one more time to get all 5 maxed? better with Fluorite one at a time, and smack Enslavers for Pets when you run out. this method really sucks for Pets crafted for PVP, but eventually they will max out, especially with Pets for PVE.

Best way to max stats is to up your item level and quality to 100 and 25% quality. Remove any useless affix. Add a Crystal affix and refill with a diamond. Then add legend. You have a good chance of perfect provided your character level is high. If not then just reroll the affixes with diamond or just remove the legend and reapply with another ruby. Epic affixes are easy to reroll with other crystals that won’t affect the Crystal or legend affixes. So add them last with topazes.