Is my luck too low, bugged or what?

Since then, with similar gear, at level 600 M1 and 500 M3 I haven’t find much anymore (after all this time: a few rare gems, only 1 good new pet, very few eternals).
It’s as if my drops quality worsened incredibly.

Has anyone else noticed this?
(end-game players with super rare gear are excluded, obviously)

You keep saying that, but the reality of my drops says otherwise. ¯_(O_o)_/¯

Maybe during that bug that ruined luck\drops to only blue-white items, the devs forgot to fix something?

Bad luck is bad luck sorry wish I could help with that one but I can’t :T drops are definitely functioning correctly right now though

I had the same bad luck after I took a short break about 5 months ago. The Random Number Generator was not happy that I took some time off.

I am experiencing the same issue. I played 97 maps since the luck bug was fixed. I have only had a handful of legendary items drop. It is better than it was when 2.4 was released but it really seems that luck is still off. Screenshot below of my PVE adventure page stats. [image]

The problem is that I didn’t take any long break, so it’s months that the drops are bad for me. :\

Drops rates are the same. RNG just isn’t favouring you. Trust me I had this for 6 whole months or more, even with maxed out farm affixes and super fast farming for hours on end , even with fortune bringer but I did get some time off at times (which arguably somehow made me luckier). Still I managed to make some high quality builds and learn a lot during so much time. I managed to build Charged Inferno, my Will of the Force PvP build, My seasonal Maidens’ Build and even a farm wizard. Also my Alchemy pierce wizard which is work in progress. Just need to collect an absurd amount of crystals to feel rich and then spend it once the next patch comes. That’s the best way to be playing DQ imo. Also 2-3 Expensive Exp builds.

Now I’m suddenly getting as lucky as Griffin/Cronos in terms of crystal drops . I always wondered how Griffin got rich so quick lol. But now i know, I do the same as him and pray to the gods of DQ. Clearly they favour Griffin and other notable players. They always seem to favour you when you play a lot, if you take breaks or if you played for a year . It is random though, hence Random Number Generator or RNG. Then again I’m finally farming for hours like I always used to for those 6 months I was unlucky at.

I played various ARPGs, so I can distinguish temporary unlucky RNG from changed RNG formulas, by now.
The frequency of good “rewards” has drastically changed for me, for one reason or another.

I had this for 6 whole months or more

You mean like 3 Eternals, 2 Crystals, 1 legendary pet, few gems, no rare stones for months?
Because this is what I’m talking about…

They always seem to favour you when you play a lot

Is this confirmed or just speculation?
I wouldn’t like it, because I cannot play too often.
Btw, I still play as frequent as before the patch (or slightly less).

how much item drop% do you have?

You mean like 3 Eternals, 2 Crystals, 1 legendary pet, few gems, no rare stones for months?Because this is what I’m talking about.

Anyways I run Epiphany on Main and Hirling at (5).

For the gold find, I simply just put Mythic 3, Fortune 20 per character and 1× 225% gold find crystal affix as well as 2× epic gold find affixes on the main character as gold for some odd reason isn’t affected by averaging the same way Luck and Item Drops are. Also fortunate perk from ascension and that’s 1012%+ Gold Find.

These listings are the most efficient possible ways to make use of Epiphany (5) on both characters for farm affixes.

yeah, that’s the only thing that I could think of, your item drop rate is low

Oh… and how do I increase that?

Anyways I run Epiphany on Main and Hirling at (5).

@phaolo , A very efficient item drops setup if you use Epiphany. If not, you just remove 1 legend affix per character​ or 2 fortune mythstones per character and it’s 200% item drops (300% it shows up because you having hirling so you get 100% over the cap item drops bonus). 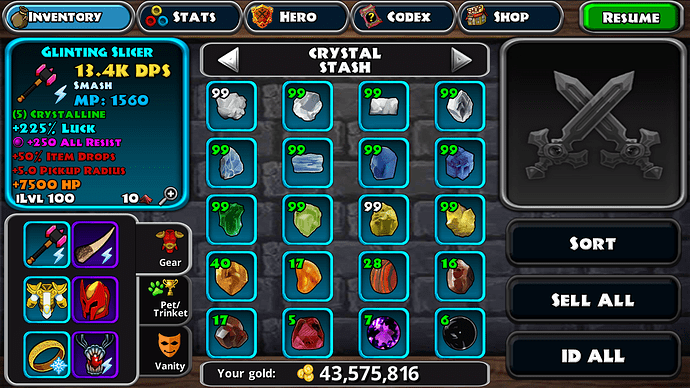 Your case isn’t much help to me, because you have endgame gear.
I’m still at mid level.

I’m going by memory about the drops, but in the past it took me like 10 maps to get a few Eternal\Crystal, whilst now I’m lucky if I get one after like 50.
Before the patch: 10 legendary pets, 2 eternal. After: 1 legendary pet.

Oh… and how do I increase that?

All of the above, for starter use Mythstone

The setup i described is a basic setup so any person can simply be in my shoes.

I was shit at farming gear for a year and a half (mainly because i used to be casual and because patch 2.0 farming was harder due to no ascensions and stuff).

What’s even worse is that I didn’t choose to make a full fledged farming build before the battle arena build (although I managed to be no 1 Eternal League for a while in patch 2.0 even when half finished).

Also even at 2.1, I kept messing up at making a farm build but it took me a while to make one that it ultimately costs me my potential. I could have had so much more crystals than i get today (60k or 70k total crystals instead of 40k total crystals or even 100k). However I managed to catch up quite a lot to make many fantastic builds despite my losses and hard trials and errors.

Good thing I spent a lot of time learning synergies and combos and a way to make efficient builds without spending crystals figuring it out due to experience and many hard lessons.

So you use a weaker hero for farming?
At which map level?
I’m not a big fan of grinding, though.

All of the above, for starter use Mythstone

Definitely agreed. Then once you got all the item drops due to mythstones, you can slowly work your way up to Legend Item Drops when you have 20-30 rubies but for starters, using mythstone Fortune.