Is the Arena a past time?

I literally haven’t played in more or less a year and my Arena rank has only gone to Mythic Div. 1.

Should I cry or laugh? Or cry from laughter ???

I seriously think it’s time to R1 ScootyMcScooter back to mechanic for a set of trick wheels. Perhaps I’ll be given tester privileges with which to exploit honest … Uh … “Players” .

But that being said, despite my previous post a few months ago - I’m legitimately back for a green shield. And bud, that smokes and encourages the asskickmockery that scootie will be hitchhiking for a fashion statement… -,-

Naaaaah I kid. Besides I’m like more years than I actually realise in farming M\stones and crystals.

FML. May the grinding…
.

And 'Sup to the few peeps that kept this forum interesting. So far best gaming community despite it being a mobile platform. Flamers blow. Last nights dinner chunks.

;in case we have distinguished prudes among us. =D

Welcome back to DQ. if you have been gone for about a year, you might have trouble getting back into Eternal League, as there have been some changes over the past year. I think.

I didn’t fight in the Arena for about 3 months, and my Wizard that was in Eternal League got beat up enough while I was not fighting, that when I finally checked out the Arena again, I was back in Mythic League. I have returned to Eternal League with an all Epic Affix Build on my Wizard, so now it is time to farm for stuff to make Gears with Affixes that are better than Epic.

good luck on your farming.

Personally i think it is yes. Im eternal devision 7, mainly because i dont play much but ive got a half decent build in there.
My main issue is it costs 7k gold per entry, if you win, you get a chest, open that and you get a crystal and item if your lucky, with ~2-3k gold… Therefore it costs me money and the time, well i can multiply the crystal outcome by farming on the main aspect of the game… but if you lose in the arena, you get nothing. 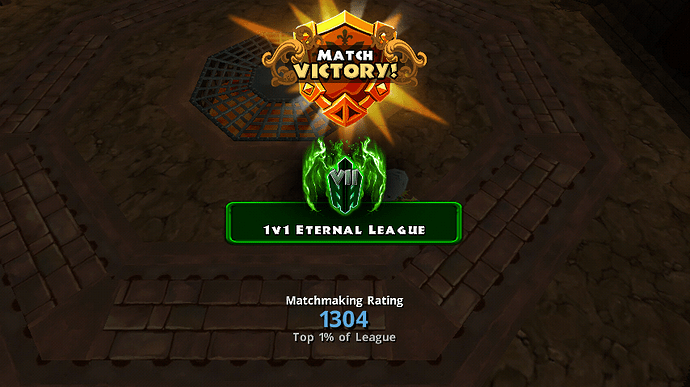 This was the easy part. It’s finding a decent seat within the league that is troublesome xD

I don’t even to try to climb the arena . I yo-yo between 5 and 7 eternal 1v1 like a fart in a bottle. At the moment in 2v2 pvp the highest I get is top of mythic division 1 then yo-yo there

@CupidStunts nice. my focus is on the Campaign side at the moment, so I only do some fighting in the Arena. I’m using my best Epic PVP Build yet. it is doing well, but is finding a lot of resistance in Division 8 Eternal League. I am hoping to be persistent enough to get back to Division 5 with it, but I think I might have to change a few affixes for fine tuning.

@dickwad eventually you will tweak your build into the number 1 spot. your builds are only getting better.

Perseverance is the Vampire’s Kryptonite.

The intention was a very very high hp build with no hp regeneration other than vampiric touch and bleed to heal. For obvious reasons mp regen was required using good old permafrost. Other sets where scoundrel , overload , equality, momentum and an eternal angelic pets. Epic stats to hp and extra hp. Was thinking chrystall armour. Then any damage I can chuck in after. 60 % dodge. Bleed skills on offhand etc. Vampiric touch needs to go. Get scoundrel on shield. Change ring to sanctuary with druidic so that all regen from druidic and permafrost become hp regen. Using blood magic which is fine. Nova and cosmiorb. Vampiric touch is crap. I could put my blinkstrike settings to low on ai. Only started this yesterday

I’ve only discovered overload in the last 2 weeks and I love it.