Is this build viable

Hi, everyone! I was scouring through the LegendEx and I tried to create a build that I think would be viable for end-game, but I wanted to know if it’s possible to craft and if it’s viable
(excuse my poopy MSPaint job of making item panels, just thought it’s easier to read in this form)
Any help’s appreciated

The idea was centering this build around survivability, damage and rare item drops (hence Nadroji) ! 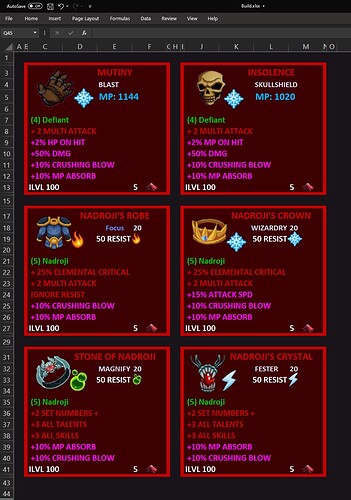 Huh? 20 dust? Is this for real? Because as far as I remember:

OOPS!! I messed up, haha ,meant to go for eternal but remembered i can’t put crystals on those so i switched to legendary, lol. it’s just a Paint edit, those items aren’t real… YET

What makes it ineffective? what am I lacking and how could I fix it with minimal modifications?

Do you have an Obsidian crystals? It is a powerful affix where it makes your affix thrice the percentage than an epic ones

Do you see that cyan colored affix? That’s what happened when you put an Obsidian on your items, sorry for my bad grammar because I’m kinda lack of sleep HAHAHA

OOOOOOH!!! there’s an even better set of affixes than legendary? i did not know that

okay, i’ll have to research more then, thank you!!!

I think there’s a few problems with the build above:

You have 60% mana abosrb but you’ll still take 40% of that damage and since you have no HP, Dodge or Block, it’s going to one shot you.

I see that there’s so much Nadroji set but no Luck or GoldFind, which brings me onto my next point: Epiphany would give you increased caps on Luck and GoldFind, from 650% up to over 800% at rank (5). 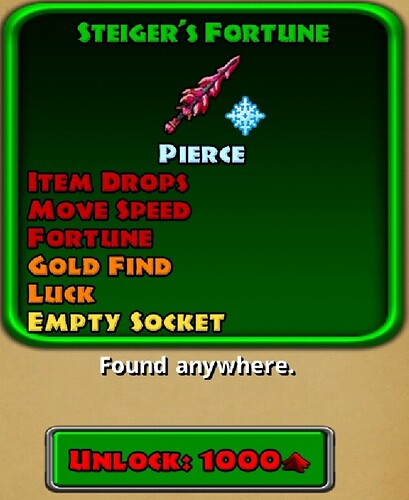 And finally Damage!! The biggest factor as to why it’ll struggle on high floors, you have no damage on here. 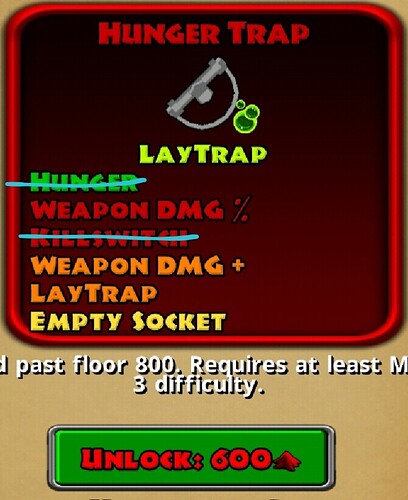 20210830_013740670×820 105 KB
It might be a little expensive if you’re still early game, but buying this, then using Jasper to make it a Mage item would give you a very powerful Skull OH… kayanite away the Hunger and KillSwitch affixes, they’re no help to you.

Edit: you forgot about your pet, it counts as gear too

are you talking about End Game for a Farming Build or a Floor Climbing Build? or a Build that is both?

in addition to Weapon Damage % not being on any of your Weapons, you took off three +100% Elemental Damage from three Items. did notice you have the +50% Damage Myth Stones on your Weapons. here is an example of the difference in damage.

Normal (Yellow): their maximum values are 75% of their Epic Affix counterparts (I think). Beginners have these on their Items.

Legend (Red): not sure of the %'s, but there are 2 groups of these. one group can only be found on Items as Loot, and the other group can be rolled onto items with Ruby Crystal.

Set (Green): only one of these per Item. some can only be found in Items as Loot. the others can be rolled onto Items with Amethyst. of these, some can only be placed on Items of a certain Class.

Crystal (Cyan): these can be found on Legend Items if they have the corresponding Epic Affix on them already, as Loot. Obsidian Crystal can be used to place a Crystal Affix on any Item, except for the Pet. only one Crystal Affix per Item.

Mythic (Purple): only one per Item, except for the Pet. these require a recipe of 4 Myth Stones placed in a Socket to create. the six Resource Mythic Affixes can go on any Item, and all the rest can only be placed on one specific Item (like the Main Hand Weapon).