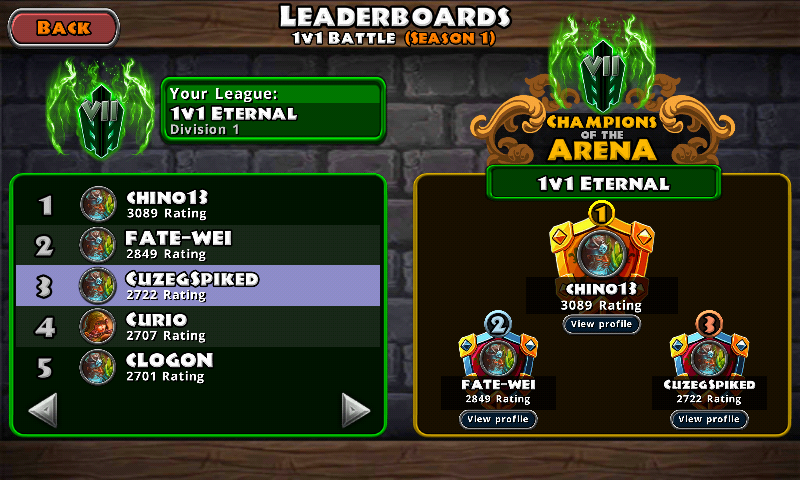 As this picture shows, I am 3rd in eternal league. When I first saw this I was like: IS THIS REAL LIFE!!!? I was like WOW!! That was my first reaction! I didn’t think I would even reach there at all!

I didn’t even realise that I could get to top 3 section of eternal league.

make another thread or post when you got to second.

I know that alot of players dropped out so I get there bur i dont gjve a **** about that. I sis notice alot of players using clogons build. Its quite easy to defeat but I never faced clogons true build so I won’t know how powerful it is. I did lose to some but thats only because of my carelessness or build faults but I have a chance against many types of builds. My win streak noticeably increased when I figured out how to properly get dispel to aork. I think it will increase further once I add inferno which is very soon. I have so much trouble trying to get amethyst but I don’t need to because I can use an inferno hat already found. Main reason why I am in arena is to get eternal trophy as well as try ro be no1. Eternal trophies are the biggest pain even if the gold for it is very easy. I get 15 million gold very easily, albeit a lot spent for converting legends and crafting. If I am lucky, I could get way more than I usually g3t thanks to packsize maps or monster boost / gold boost. My average win streak in eternal league is 5-7 wins. Whats yours? Clogons copys are terrible compared to the real version. I did lose to one but that was just the build being lucky and me being unlucky. Does the real clogons build have high hp, huge dps, enigma with the fear and taunt loop and extremley tanky?

clogons AI’s HP as i remember is 27k and power is around 200, and he really do know how to set his AI

i can beat him, and my average win streak is around 10-15 but sometimes higher,

I fought you last night CuzegSpiked. You demolished me lol. So far you and Clogon are my two biggest obstacles. I am on a 10 fight win streak at the moment and I am so affraid to click on next fight because I know you and probably Clogon will be my next opponent lol. Very nice build man.

I edited my build lol. Time for more trolls. I still need ragnarok staff lol. I have stun immune, red ed, inferno, vampiric touch. Clogon build is 20k hp but I think I can demolish 20k in one shot if I huild it right
Is clogon extremly tanky? Trickster also very powerful in build. Also the reason why I demolished you @knutz is because I finally managed to set up Ai. This is because of access to hirlings actually. I thank @Teacup for generously giving me hirlings

. With hirlings, building is certainly much easier and testing AI. If I hadn’t set up Ai right, I would be screwed.

I am on a average 7 win streak and a clogon build can smash me or a blinker. Clogon build don’t always smash me but sometimes yes. Athena is somewhat a tricky opponent but she not clogon build. I am farming extremely hard just to make my build this good in pvp 1v1. Anyway I have never faced clogon before in my life but if I do, I think it would be an amazing battle. All I need now is 10+ rubys, Eternally find amethyst and ragnarok because of defiant and 100% WD . Since gold is so easy for me now, I think rubys will be easy, amethyst will be a lil hard and rare legend ragnarok is hardest. Blistering 200% will be very good too . 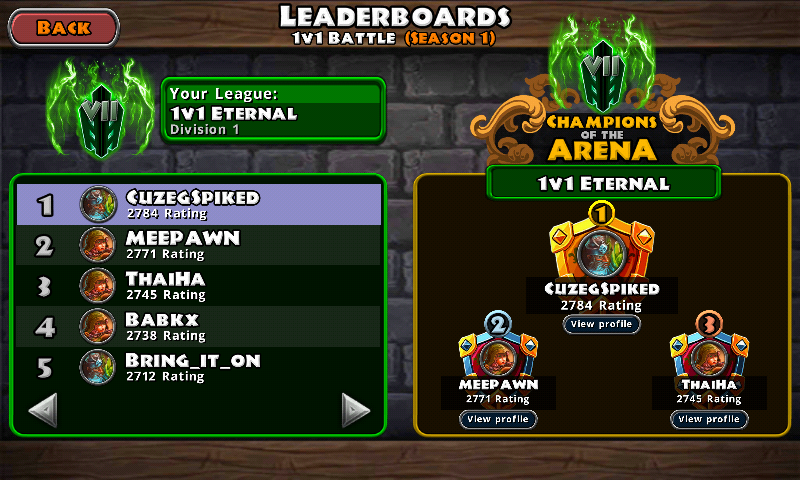 Wow im no1 now! First time reaching no1 finally happened! I know some people like babx was easy but still! Being no1 is an incredible achievement even if people have dropped out of eternal league. Now I just do whatevers I want. This happens if I nearly get a 10 win streak.

Awesome. It’s great to see your hardwork you out in creating that build paid off ^^

Thanks m8. Really appreciate it. I put my soul amd heart into this build and believed it will be the best. I even planned over in my heard. Not too much planning since I am not the type to plan for ages unless I create a whole new build. I would say my build is basically finished and anything I add is bonus like blistering.

the real thing is to see how effective your build is, and how far can you reach with the build you created

Congrats man. Just fought you again and won 3-2. Wasn’t easy but definitely a lot easier than the first. I tweaked my setup a ton but your AI was nowhere spot on like it was the first fight. Did you change something? I could give you the run down on what your AI was doing if you want me to.

EDIT: Of course you want to know lol. How stupid of me. Basically, your AI was all over the place. I mean your strikes were dead on last fight but this one I was able to get away in time and maneuver some. Plus your damage seemed down from the last fight. not sure if that was to my tweaking my setup or what. but you definitely didn’t hit as hard. Your HPs were showing 5525 and your Power was at 525. It seemed much higher the first fight.

I didn’t intend for hp to be high in my origonal plans and had it there temporarily but for some reason I edited AI to test something and now jts screwed up. I noticed that error too and I was puzzled as to why when I changed it.