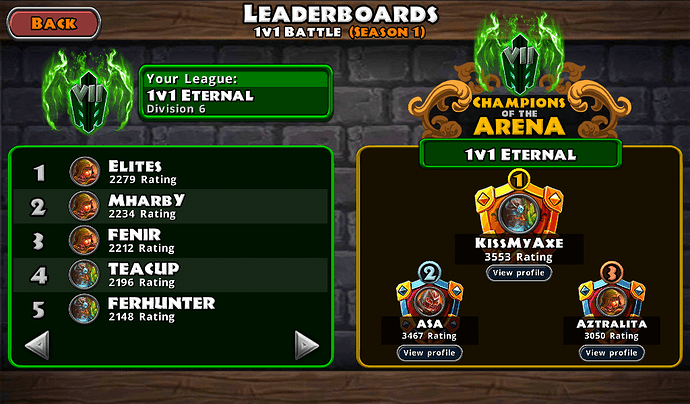 We need to have a new patch… 2.1 has many bug even in environment

Nope, your devision 6, theyre devision 0… Im not sure how it works because im too lazy to fight endless waves of the same kinds of build, over and over until i reached number 1 spot for a few minites only to repeat the process again only half an hour later to get back to first place again. But i do know that your in a lower devision

Also noticed im in that picture

since when was i eternal league though?

About your “bug”. How about to inform yourself, instead of requesting a new patch?

Battle Arena
You are now matched against players with ratings similar to your own
You are now placed in a division relating to your progression in your current league ( I - top 10%, III - top 30%, X - bottom 10% )

You now gain experience towards your “Arena Level” for each game you play. You’ll gain more experience for wins than you will for losses. Arena Level is used to unlock vanity items.
Reward chests earned in battle arena now have a chance to be Rare, Epic, Legend or Eternal

About the game development (especially the bold one) and your request for a new update due “too many bugs”:

Updates take a great chunk of time to do. I don’t know if everyone relaizes but Steigerbox does all and I mean A L L of the code work for the updates. I handle some code stuff on the build side but it is Chris flying solo for the most part when it comes to getting these updates ready.

We have a great number of helpful testers that help us vet our game play changes. This kind souls play out of the kindness and passion for the game.

I do all the hardware testing (and in most cases it could be argued that I do a poor job at that). But when there are over 2500 Android devices along that can play our game testing for every hardware issues is impossible for us…but we try.

We also try to work to get as much exposure for our game as possible. If we have an option to say, get featured with a potential partner but they only have a slot for us in X weeks away, we have to take that gamble. A feature like that could put us in a great position to make our current game even more awesome!

I know how frustrating it can be to wait for a patch or content follow up (I play games too!) but understand we are not going this in any sort of malicious way. We are just trying to deliver the best product possible for our players AND position our games to be as successful as possible.

Bottom line, thanks for your patience and Ascension will be here as soon as we can make it so

In 2.0 I can view them i’m on top 50 but now my rank was deceased…
I better kill first to this enemy to climb in division 0…

Thanks for your reply bro

Just had to go that extra distance to me refia

, cant complain with the support you give though

As a heads up, we are starting a new season in a few days (steiger will post the details) this WILL result in a reset of all battle arena rankings.

Will there be any permanent benefits (cosmetic or otherwise) from having placed in league “x” during the first season?

Arg! So we only have a few days to unlock those auras? Or they’ll be available for unlock in the new season too?

“As well as”… so will the Season 1 vanity items ALSO be obtainable in Season 2? Or just the new items, and the Season 1 items remain a perk just for those who earned them in Season 1?

Sorry for not being more specific