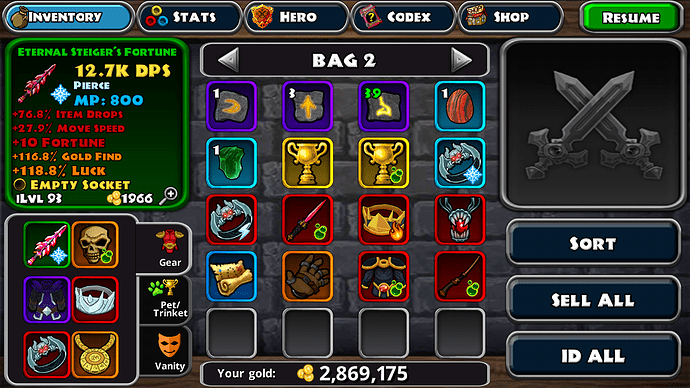 I also have Steigers eternal but never used it. No damage on it and you can’t change affixes.

The key to aftermath is you gotta have the full set. Same info I provided above works for an aftermath build. Instead of poison, change element to fire, but only on your amulet & helmet. Leave the 4 set pieces element alone. Instead of maxing attack speed, max reduced cooldown. Also max meteor skill to 40. Use shatter and hop around the screen dropping meteors everywhere. A rudimentary aftermath build should generate DPS of 1-2 million for meteor.

I’d max meteor then a mixture of dexterity & intelligenc & luck & shatter. None in health. I focus on building a characters DPS 1st and then go to the highest floor that I can easily kill mobs. I grind the same level for hours and keep leveling & adding skill/stat points. Then I ascend and pick the treasured perk, grind again to ascend & pick dealer perk, then the fortunate perk. Hope this is helping.