LoH vs Life on Hit:)

I’m trying to build and exp grind build like the one @Griffin has made:

I had 250 life on hit affix and switched it out for the 2% life on hit(Boon) mythstone as the only affix to supplement my hp in the build other than health orbs.
Now - it seems like my general survivability has gone down. So I’m thinking that the way the blight damage works works better with the fixed amount of 250hp than the % based, despite of high damage numbers.

Anyone else know how it works, if one is better than the other for a “blight/poison/toxic crit build”, or if a mix of both is recommended?

All the best
/Wack:)

@Wack 250hp on hit is better cuz 2% hp on hit myth (2%based on hp stat u added on stat. It does not calculate ur overall hp from added bonus from raw 10000hp and hp%boost from set affixes and affixes)

Thank you so much. That actually makes a lot of sense, as these are my HP-stats: 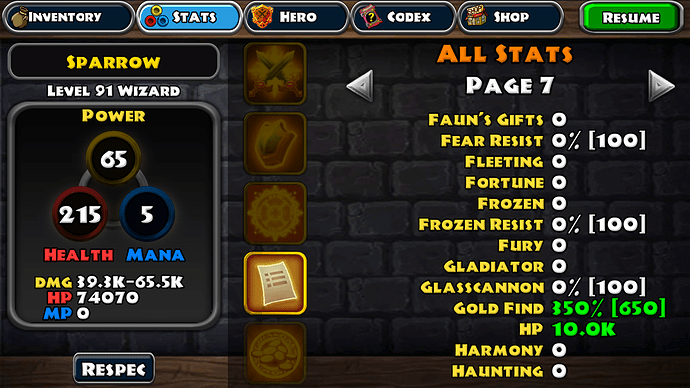 As I understand you, the “hp stat” you mention is the 215 on my screen shot?

Yes that is correct. However, I said “should” as it might be bugged.

I’ll have to test it out in PVP when I get the chance.

I’m just wondering, if no other numbers than the ones mentioned matters, how the % based life steal will ever be valuable compared to the fixed version?
At least based on the illustrated equation, under the best possible circumstances the the math would be:
(lvl 99+299 pts) x 0,2 = 158,8 LoH
Vs 250 LoH, with the ability to put 299 in power instead. Just makes me wonder if the % hp/mp mythstones are worth anything but the Mythical recipes, they’re a part of?

Yes that is correct

That would have made sense eh?