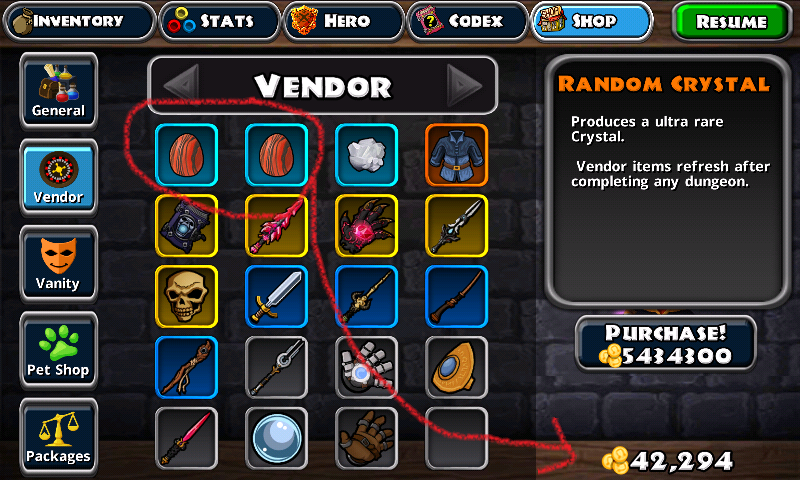 Just rng troll lol. That just happens in this game. I remember a day where I had those Jasper crystal offers every 2 floors and sometimes 2 of them . Or every 1st floor for 4 times in a row .

LOL, I think you have some excessive luck on this game.

Nah. Ok maybe but I had no good luck for so many months and wished to be a DQ god but I stopped wishing and here how I progressed. I had no idea I could have so many crystals to get 77 rubies and 99 of evert other crystal as well as 20+ amethyst and obsidian after saving up for a bit (even when I didn’t notice).

Considering I farmed terribly for my first 6 months and barely played , I seem to have gotten luckier as time went by and now I am playing a little less or a lot less but lucky as well.

I though I was so unlucky when I saw cronos be extremely stacked as well as Griffin but I realised that I wasn’t unlucky, I was just lazy. 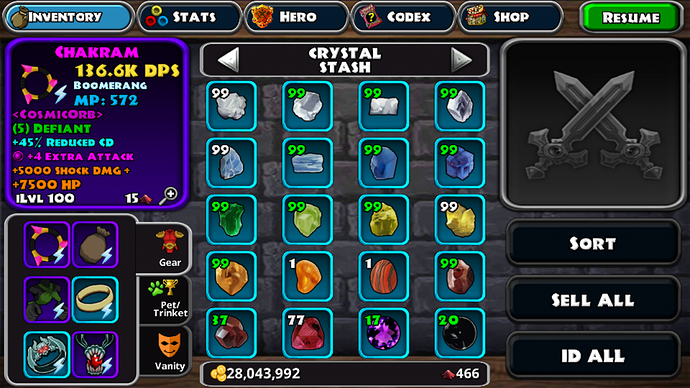 Now I’m in the process of converting all my crystals so I can get 99 on all of them. More gold to do so but I shall do or! I know Griffin and that lot have so much crystals but I’m just starting to see how many crystals I can get from converting my stockpile. I’m already broke lol.

I shared my rogue discordance PvP build already. Just check this out;

[image] This is the Permafrost Bonus working in PvP with just 1 set and doing its job. Same build as posted. Credit to @Midlumer for giving me permafrost and hunger suggestion and I did actually think about using Midlumer Orbit Build ideas to implement to my own build and credit to @Mr Scooty as well as Midlumer for teaching me about the Bonus effect in arena as well as suggestion for permafrost bonus. Due to this , I feel like I can make any build now

Ty broo. Its mainly for pvp?

Yup. PvP only. My farm build I didn’t share because it didn’t cross my mind.

I have too many rare crystals, about 2k-3k of each, but now I’m broke to convert all these to ultra rare. I usually just convert what I need for my builds. But having 99 of each crystal is something fancy that costs too much time. LOL

Same lol. I only recently started to bother getting 99 of everything but I could have done this 5 months ago or ages ago even. I could not be bothered though since I was busy build creating and saving up.