Making a build, for farming here's what I'm at so far 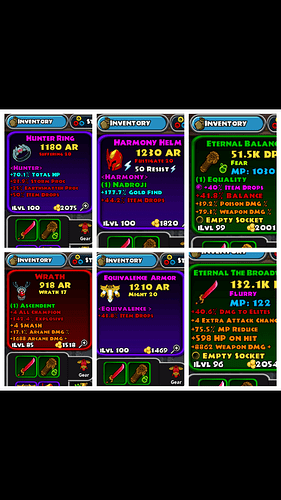 I’m out of crystals and myths due to converting
Stats are
650 luck
200 item drop
And gold find 570
I have the in app puches going to luck item drop and what not the one you can buy that does then all for x time. So once it runs out. I need to know what to add

Needs advice on what to put on to make me a little stronger for I can farm higher floors.
I farm 200. M3 pretty easy.

Do plan on making a new primary hand wepon. I want to make a hammer but haven’t found one yet and also replacing the amulet.

i suggest using hammer so try to hunt ragnarok hammer

Well in the long run I would aim to have nadroji on the amulet that you are going to make/use. That way you can free the helmet up to use a farming affix like crystalline or eternalized. Whichever you put on the helm I would put the opposite on your weapon. Glinting hammer is is a good farming hammer since it has the ele damage legend affix (I’m pretty sure but that’s just off the top of my head).

Glinting hammer for weapon eternalized affix+ed and crystalline helm. For OH weapon I suggest cranicupia or something sounds like that, the horn 1. Try to put epic affix gold find and luck at 75%, much cheaper if you’re just starting.

I like the totem tho for the pull. I pull all then if I have hammer I smash and all dead in 1 hit or 2.

How does the horn work?

The horn’s skill is Sprint, which is very useful to zoom around and speed up clearing times. You can also use an Amber to change the special skill to Taunt, for the “pull” you mentioned. That way you get the best of both worlds.

Oh also, if you change your helm’s talent to Provocation, you can get a 30% chance to cast Taunt on attack. That means even without changing the horn’s special you get a good number of “pulls” when you’re swinging your hammer.