Since I’ve been farming for 12 hours a day to hunt dusts on very easy mode, I found no thrill in killing mobs (it is too easy), so, I focused my attention to the map. Clearing floors and observing the structures of every map I run.

So here is what I’ve observed. 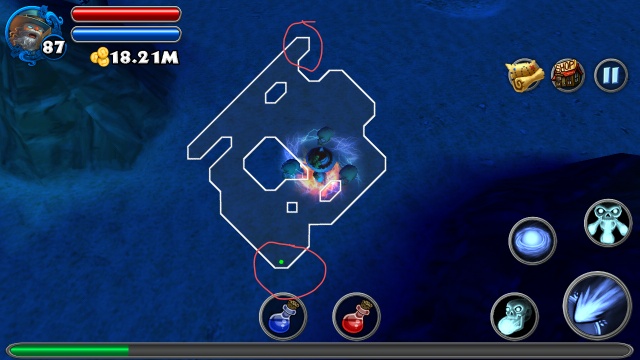 I conducted a five-map experiment, observing the positions, designs, and the relations on those five maps. Here, on example no. 1, I marked my spawn point (red circle, north), and where the Cartographer is found, (south). 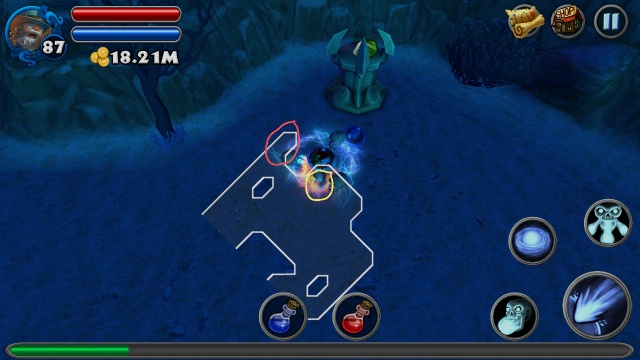 Now, I marked a shrine I found below my spawn point. We will talk more of this as we progress, but we need to see the other four maps in order to form a solid conclusion on shrines. 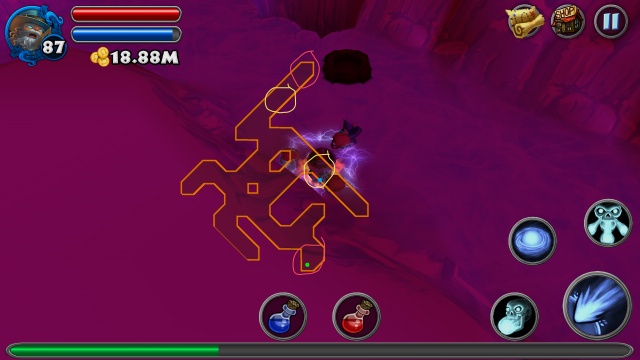 This is the second map. I spawned up north, and found the Cartographer down south, same as the first example. I also marked the spawn point/Cartographer and the shrines. As you can see, we have two shrines on this map. A pool and a blue shrine.

But upon looking to it closely, we can see some parallelism that is happening here. Look at this: 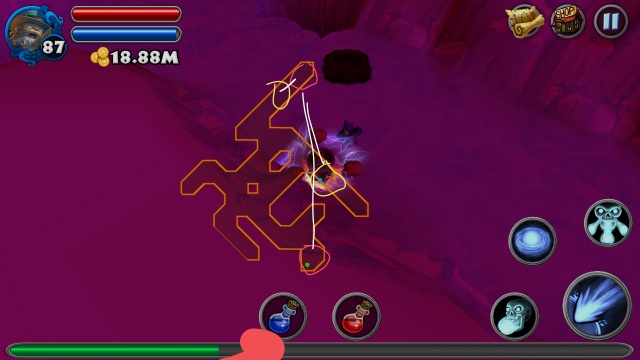 Q: Meh, these points are coplanar. Any Shrines/Cartographer on maps will always be parallel to the spawn point.

Yes, I am aware of that. But what can we observe on these examples? 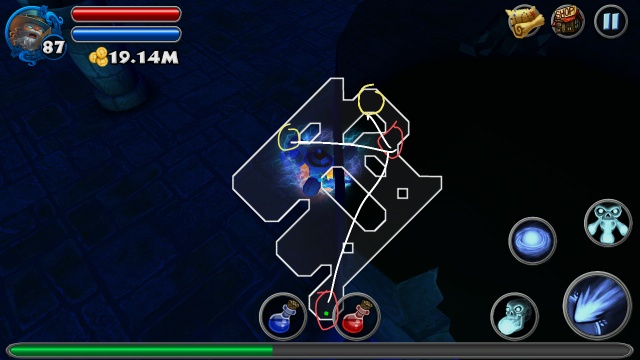 On this third example, my spawn point is not placed to the northernmost side of the map. In fact, I spawned at the northeast. But knowing the if-I-spawn-north, then the Cartographer-is-south information, there are two possible directions where I can find it. Either I find him on the south, or southwest, (opposite to northeast).

Knowing that the spawn point and Carto are parallel, I can just navigate my way and follow a straight path (see the white line). So its either I go straight to southwest or to the south, likewise, the Cartographer should be on those two sides of the map. If I don’t find him in southwest, I go directly to the south to find him.

By doing this, it will save me a lot of time because I don’t have to explore the map completely. I just use this information to find the Carto and run another map, and do that all over again. 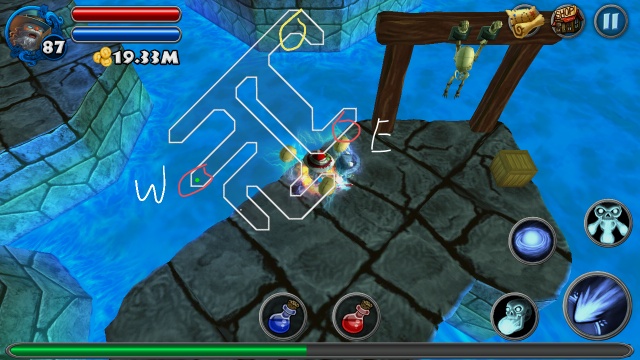 Here on the fourth map, we spawned at the east. What is opposite to east? West. The Cartographer must be on the west side of the map. We just follow a straight path going to the west (take left and right turns if needed), and boom, kill the Carto. 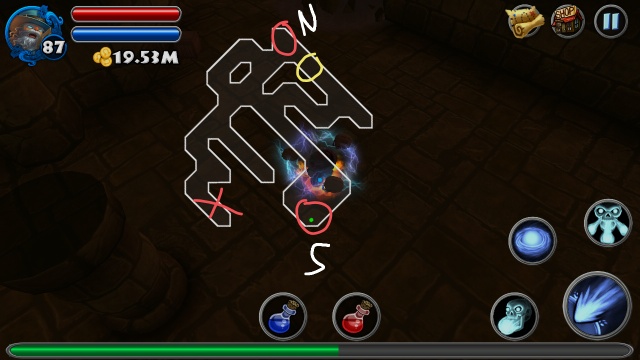 The fifth and final map. Here I spawned north, but I tried not navigating to the south. Instead, I headed for the west, isolated side (marked with X) of the map. This is a common mistake for hunting the Carto. Because that side of the map is isolated, we have this feeling that the Carto is there, but isn’t. I found him at the south.

All of them are found at the SIDES and CORNERS of the map.

If we look at our examples, all of the shrines are placed either on the sides or corners. There are no shrines found at the center of the map.

Using this information, we can hunt epic enemies through hunter ring or perk and find the shrines as quickly as possible. Since we know that they are placed on either side or corners of the map, we therefore navigate the perimeter of the map, not on the center.

Say if you spawn east, you can navigate clockwise or counterclockwise of the perimeter of the map. Either of the two, you can still find the Carto on the west side. By doing this, you can save a lot of time by exploring just the sides and corners of the map, not on the center.

• The Cartographer must be found at the opposite direction of your spawn point. If you spawn on south, the Carto must be up north, vice versa.

• If you spawn on the east, follow a straight path to the west and you can find the Carto, vice versa.

• Shrines and Pools are found on the sides and corners of the map.

Dungeon Quest randomly generates unlimited number of floors with unique structures, but there is a relationship between spawn points, Cartographer/Portal, and shrines. Navigating this way will save you a lots of time.

To boost this tips, you can use a legend item with a movement speed affix or use Flight mythstone. This will grant you more mobility as you use this guide.

Note: This is based on my own observations. The experimental probability of these conditions to be met is 5/5, since those five experimental maps supports my conclusions. There are times when the Carto/Portals are found right next to you, but they trigger quite rarely.

Tested your guide and I can confirm it’s right.

That would be awesome. I only played DQ for like 2 weeks, and still a newbie. I’m currently at floor 268, farming. Enslavers are pretty rare to spawn for me, and I haven’t farmed a nadroji ring/amulet/chest/hat yet. That means I have no enemy rarity bonus, yet.

It will take time for me to progress and conduct another experiment for enslavers.

If you want, you can make an experiment of your own. That would be awesome too.

Good work @Insanity and welcome to the forum!!

Appreciate it man. Thanks!

@Insanity your at the right floor for nadroji stuff. Persevere 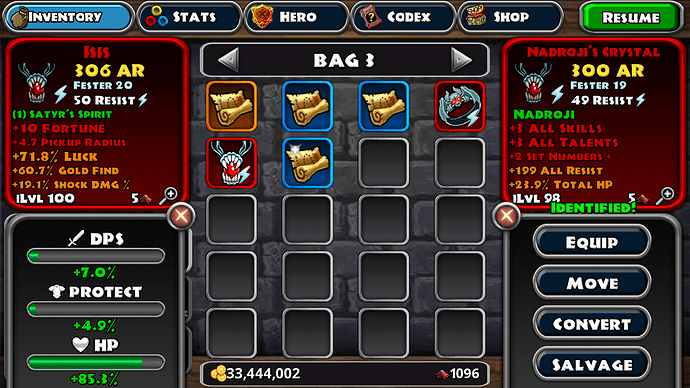 I’ve never been so happy in my life.

Congrats - that will make farming a lot more fun.

The first Nadroji is always tough to find. It takes Nadroji to get a Nadroji LOL
Another important thing about that piece is the +2 sets.

Yeah. I am theorycrafting a PvP battle mage build, and I badly need those +2 sets. Elixer is really hard to find but I have one and I don’t want to spend it.

for the Enslaver, not sure of percentages, because I don’t really keep track, but I find him near Shrines, Cartographer, and sometimes solo or near Rare or lesser monsters. his placement is a lot like Shrines.

Now you have nadroji you are guaranteed to drop an eternal one. Watch this post

I think the base chance of getting eternals is at 1% right? I haven’t bought the Treasured ascension, but I have the Fortunate ones. And I have like few, 11 eternals collected on my journey, so yeah, an eternal Nadroji would be so awesome.

I have a question also. If an eternal item doubles the affix value of an item, is it possible for an eternal Nadroji ring to have a +4 sets affix?

@Insanity both eternal nadrojis (amulet and ring) has +4 set affix. also not only nadroji’s has set affix. Rogue’s Frightening Choker and Clasp of Terror has that +all set numbers set.

@Insanity my first perk where fortunate and treasured

Oh, I see. Thank you for that.

Gold isn’t much of a big deal when you have maxed Gold Find. I think I’ll go for the Treasured perk too.