Hey i’ve been working on my build and when rolling stats on my pet, I came across Mindful and Relentless. Will my wizard benefit from these stats?

Although this totally contradicts Cerebral vortex and torrent.

This is a question I’ve brought up about five times. Even created a topic revolving around skill affixes and whether they work if you’re actually using the skill. As Cerebral cortex would suggest.

For instance if I’m using Scoundrel and my pet happens to have blinkstrike +10 - It should work. According to the stat page it says it does but users have said that it does not, to my prior predicament anyway.

Anyway it doesn’t make sense at all. And if torrent for cerebral vortex isn’t increased (as a wizard) then it’s pretty much useless equipping eternal items. Considering that it’s a set designed for a wizard?

And if it does work. Why is it if when one uses Battle mage, Scoundrel ect. The same doesn’t apply ?

Can admin or a tester give a direct sensible answer to this once and for all, for my sake?

Everything you say are applied.

As you said, your pet have +10 Blinkstrike, so in PVP it will become +3 only. Its just so small value to increase the DMG of BlinkStrike.

In PvP if your DMG doesnt high enough it means your enemy has VERY VERY HIGH DMG Prevention affixes such as (Armor, All Resist, Block, Dodge, Mana Absorb)

Hero Skill Points are not valueble in PvP even if they are Eternal Gears.

+Torrents from Cerebral Vortex, and use by Wizard, still adds effect from Torrent Skill but you cannot see it in Character Interface Window.

Mindful and Relentless is a different story.
Talents effect are not shareable not like Hero Skill. Torrent is a HERO SKILL and Mindful/Relentless is a TALENT.

IF Talents from another Character are shareable, EVERY CHARACTER can become stronger and vicious animal.

And some Talents are not compatible from another Character.

RECLAIM from Wizard use to Rogue what do you think will happen.

SHARPENED, BARRIER and BLINDSIDE are Character Based Talents. It means you cannot use them on another characters.

I wasn’t referring to a talent at all. Hence I used blinkstrike as an example which is a rogue heroic skill.

It works yes but as I said above, just a small value to increase your Blinkstrike DMG.

Thanks at last I got an answer regarding this.

It was bending my mind backwards 'cause I didn’t see much point in possessing other class skills if you can’t enhance them with affixes appropriate to the skill.

I understood that talents do not work when I enquired about my fairy that had a talent that beefed taunt.

It’s why I always ask questions here tho’ .
The stat page lost its integrity many updates ago, I’m imagining.

Much better not to use Hero Skill + so you can save slots for ED+ and HP or other important affixes.

Depends I guess. Primary and secondary skills pumping an average of 200% DMG and whatever perk they generate - seems pretty legit to me.

When I was using my aftermath build, those 40 points went to good use.

And why OH WHY is Scalp so ridiculously powerful?!

and so easy to work into a build if you really want it. (rhetorical question BTW)

Scalp deals 100% Bleed and IF you partner it with Rupture…

Scalp can be cast even you are far from your enemy.

Tip:
Aftermath are nothing on Eternal League even when you use 2 Aftermath, its useless.
I made my own Aftermath + Enigma Build 3.0 but still when it becomes AI it stops suddenly and dont do combos even if it is 100% CD reduce.

But it is good when you’re not on Eternal League

Lol. I don’t use the aftermath build in the arena, though I have tried it out. It was poop.

Ruptured is what I’m going for. Along with vampiric touch and blood magic. I’m not sure if they stack but I’m going to try.

It worked amazing with scoundrel and ninja. Along with my pathfinder, masochism and Fauns gifts.

Lol. I don’t use the aftermath build in the arena, though I have tried it out. It was poop.

Ikr. Even the most damaging aftermath or most balanced would be poop. A troll build however could still be done with aftermath or a “quote immortal” . It won’t deal much damage and wouldn’t be fun to use but the A.I would be meh.

Still, that doesn’t stop me thinking of crazy ideas of what I could do with aftermath PvP despite being suckish and with other people. I mean if a person seriously wanted aftermath in PvP , some investment in survival as well as using thing like skullshield and stuff. It’s generally not recommended though at this point and not worth it as I would agree.

If you’re going to use Aftermath PvP I could only think of spamming procs and getting +All skill for whichever are appropriate to your class. Well, it’s definitely something I’d do. 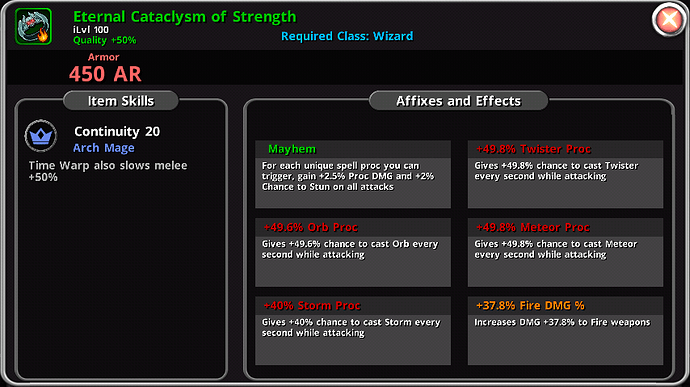 Yeah. That’s why I went for Discordance aftermath rogue since proc Discordance used to be a thing but not anymore. Although I realised that my procs that are high MH% would have been even more powerful without Discordance .

Aftermath with procs did work back when aftermath was successful as I had to rely on storm , meteor and cosmic orb/bombard to really make use of damage potential back in 2.0.

Even now , proc would be good with it. Clogon build was possible with Aftermath but I can see an even more annoying build like that in PvP. Not immortal aftermath though . It wouldn’t be practical but it can still be a po

In which case, I think Hunger could go well with it as well as thing like Angelic since aftermath can easily be affected by APS (Attack Speed) and reduce CD as well. Some form of blind , stun and other CC combo , tank from thing like equivalence , summoner if you use minions , wide AoE procs like storm and some HP with damage Reduction and damage.

One thing for sure, it’s possible that hardly anybody will have fear/taunt resist so if a truly successful aftermath build happens in this meta, it could shake up the meta and it doesn’t even have to be a wizard either. Discordance aftermath could still work well though since you can get more than you’d normally would in MH% but it’s the hit frequency and easy missing that is the issue as well as how easy it is to get hit.

Flawless victory, cosmic orb, storm , skullshield , 7× ED , high AR/resist if need be for survival , some form of teleportation apart from shatter to get to enemy much easier . Definitely Terrashaper and CV since you will most likely get hit alot.

I do remember dealing high damage with meteor though when I used Discordance with Crits and deadly pure damage build and even though hit frequency isn’t as high, the damage is dealt by crater 4 times in a second if they stand there and the meteor already deals 2 hits , one from explosion and other from actual meteor. 100k crit with meteor, gone are those days. Shock or ice element can work. Coat skill or proc can be an idea though.

Even 10k-20k meteor would be acceptable as long as the procs also deal 10k which is totally possible but people are that much more tanky that it really depends on hit frequency as well as how long you survive a round or so.

At the end of the day, not exactly reliable to use aftermath but the possibilities are there since this game has many possibilities.

Aftermath without teleport is an afterdont.

Sh’yeah so I’m pretty stoned rn. But I get what you’re saying and I recently just srumbled upon it myself with Aftermath. Which is why I stopped using it - it’s just not what I’m looking for rn

I also found procs worked significantly well, as said mostly crowd control spells I find useful. Also the eternal aftermath bonus item is far better PvE than anything I believe one could craft. As for PvP… Sureshot seems likely to suit my play style as I rush when using that build. AI has a fun time teleporting everywhere - feasting on procs that never seem to really end and that hurt with considerable CRT DMG and deadlystrike.