Waaa ShinyBox! Help me! Most of my Eternal Rings and Amulets went missing while playing connected to the internet earlier or maybe when I used the Samsung gameplay recorder (using Samsung S7E) T^T
I’m an Eternal hoarder this is why I always check my inventory before I sleep and stash my eternal loots for the day on these characters. I have two eternal characters as bank for my eternal items. Earlier, I recorded my gameplay using the Samsung Gameplay recorder (Samsung S7E) so I can see my highest DPS while on PVE. While I’m about to stash my loots now, most of my rongs and amulets went missing

Here is my current inventory 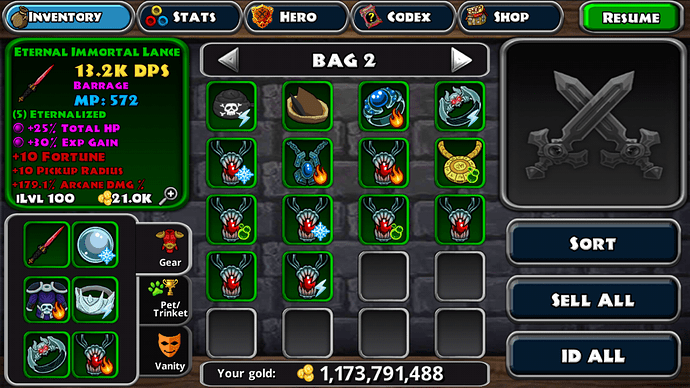 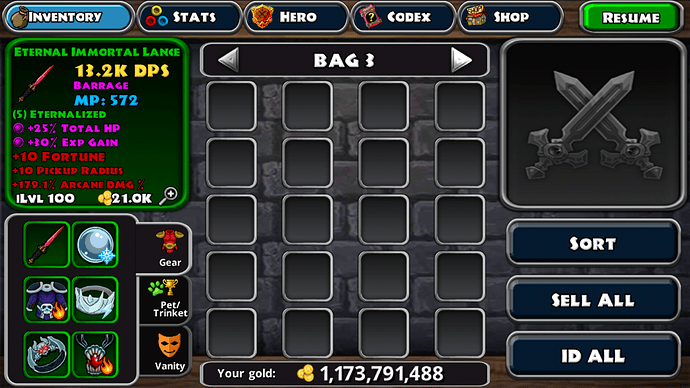 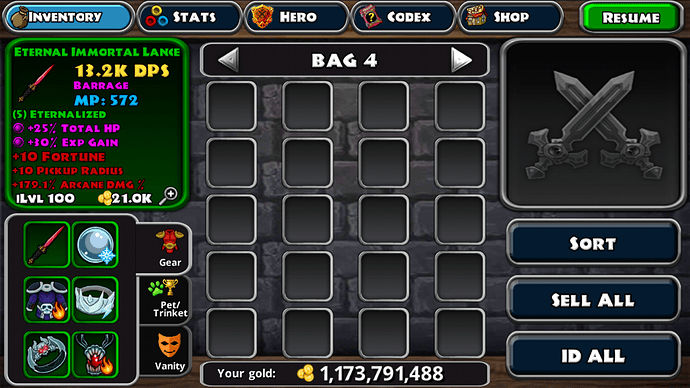 Luckily, I saved my progress few days ago. I downloaded it on my mums phone (desperate). Here is my proof of stash 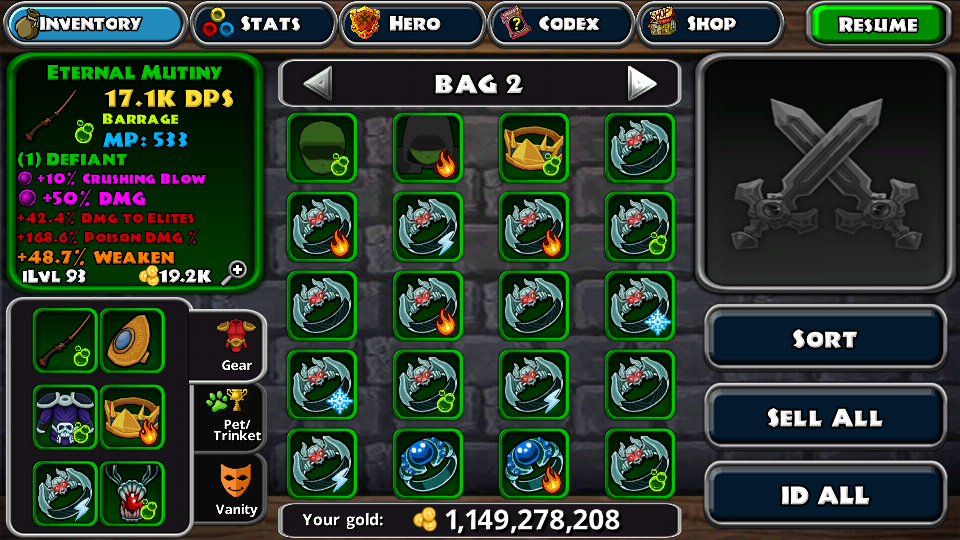 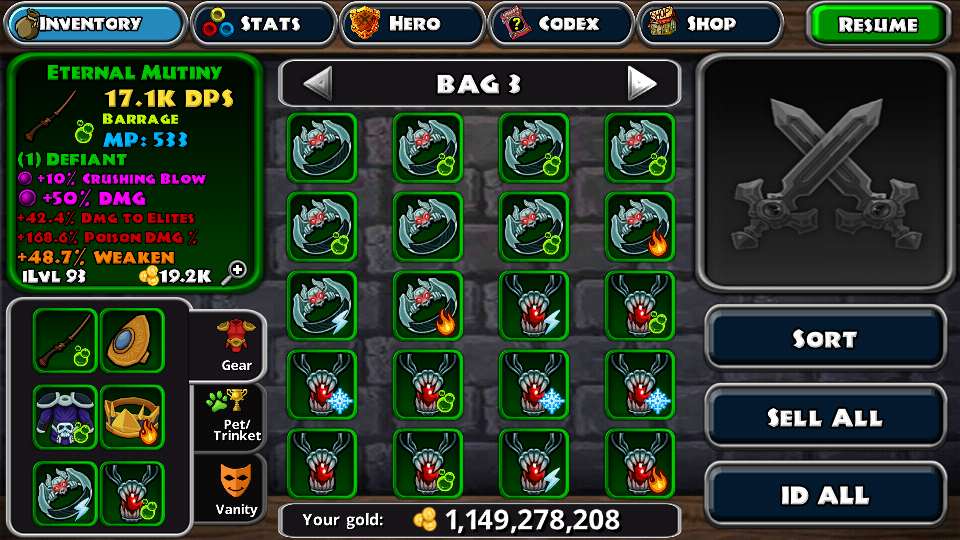 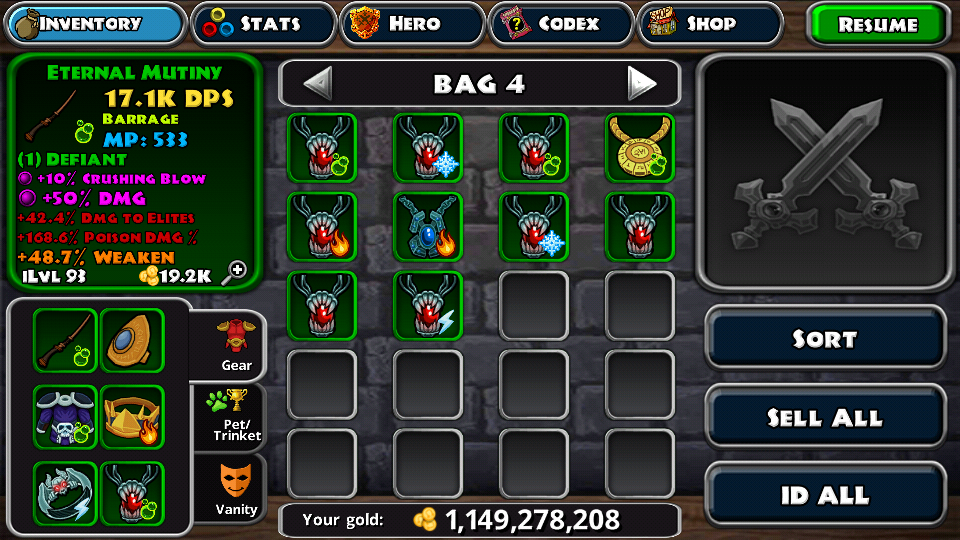 I didn’t upload the account yet hoping for some remedy from the support team.
Today I looted Eternal Epiphany ring, Nadroji amulet, masochist wiz wep, 1 obsidian and amethyst, ++++ exp for my near 3rd eternal character.
Please help. I can settle for the loots stated above as help. I can farm the exp again. I can send screenshots of the new loots if you want.

I want to play

but I understand it’s weekend

I will download my last saved game. I need to play. I can’t sleep. Bye eternal items

Samsung Game Tools’ recorder caused this. I knew it. I remember now. I have deleted the recording already but I noticed earlier that my Bag 2 and 3 on my Magic level wiz became duplicate (just usual items to be sold) but the inventory that was deleted was at my eternal level wiz. I didn’t open the eternal wiz so not sure how thet were deleted.

It never done this to me. I use game tools 24/7 on the phone. I still use it to this day to record, take 1000s of screenshots and save power. Mind you I’m using the s6. I’m not sure why this happens to you when you use game tools.

I did have a corruption glitch where if I sort too much and lag spikes, the main character inventory gets duplicated to hirling. It was more prevalent to my old phone but still happens on my new phone but only monthly instead of daily. Maybe you had some sort of glitch that removed things.

Edit: nvm, you recovered your save.

The sort lag happened to me. It made my bag2 and 3 duplicate.

Oh so I’m not the only one. Thank God! Well I know the cause is related to lag. To make sure I can try and prevent this, I put confirm sort yes so I don’t press sort much and see what happens.

Make sure when you play dq that almost no other program is taking up ram in the background which may help in lag reduction like remove all with recents. Greenify is an app I use to hibernate program if I’m not using them which greatly helps when playing dq as less lag. I do put no power saving on DQ to try and reduce lag . Yeah I do root which does help but I think you can reduce lag without root . You probably know how to remove dungeon quest from game tools right? How I do it is hold on the icon, consider it as other and then remove it from game launcher her. Game tools should no longer appear. Will this help?
Confirm sort yes may help because those buttons are sensitive which may be the cause to why my inventory duplicates. You can sell all and ID all but not sort all regularly.

My fix is to not use Game Tools on DQ xD

That lag is super weird! I sold items on one hero and it affected other inventory too. So scary.
My precious eternal items lol

Thanks to you too! Now we know the real culprit hehe

Disable game tools in settings- advanced if you want to. Recording in game tools is a joke. It never works. AZ recorder the best IMO.

Haha yeah. I’ll get rid of the game tools too and use the AZ Recorder. Thanks for the suggestion!

Your welcome. Yeah As recorded for actual recording although it can take screenshots without the need to record so yeah, your choice is fine. To screenshot, it’s the camera icon on AZ bubble and the record is the video camera icon. I’m sure you might have figured this out but I’m just saying just in case.

Wait, how do you make multiple savegames?

I’ve downloaded my cloud progress onto other devices.

Ah, cool idea.
I don’t have other devices, though.
Also, I didn’t even try the online save.

You should save your progress online! You’ll never know what calamities might happen to your device!

Exactly. Every single day. Even with your mobile data if you have to (it hardly uses any mobile data whatsoever, like only a few kb per upload).

I have three devices as my backup. LOL my phone, mum’s phone, and home tablet.

DQ is the only game I’ve spent money.

Same here. Coincidence? Well actually now I only play dq on my phone since my other phone and tablet died out and my s6 is the best one but I used to play dq on 2 devices. One on tablet and other was s3 mini which helped but then the tablet died out battery. Then I stuck to s3 mini for the most part for DQ and then I quit. I returned to DQ in November as soon as I got the s6 because it sped things up. Yeah I uploaded everyday tbh.

Ugh… I thought that Google Backup was enough.
I’ll try it asap, thanks

yes. the Upload button will put your save game data on our back up server.

If you get a message that says “You must download first” don’t do that…email support@shinyboxgames.com and I will get you cleared for upload.