My DQ based Jewellery from a school project

As the title says: I made DQ based Jewellery from a school project. Since I finished school yesterday and managed to take those projects home, here are the projects I will show you.

Take your time to appreciate the art I have done and thanks for reading.

My display of the projects: 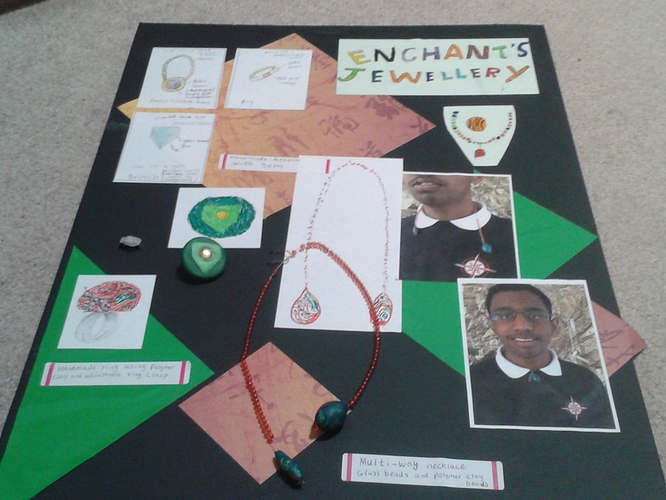 This display is there to present my DQ-based projects to pass my jewellery course and it looks good. It has the made up company name “Enchants Jewellery” as well as the logo of a drawn up necklace which has beads with the 20 crystals and the colour for them. In addition, it has the initial ideas for my DQ based projects for the Amulet,Ring and Broach as well as the final piece drawing and the actual product. It also has a picture of me wearing the necklace. However the actual ring was broken so it only has the actual clasp for the ring.

The made-up company name and the logo 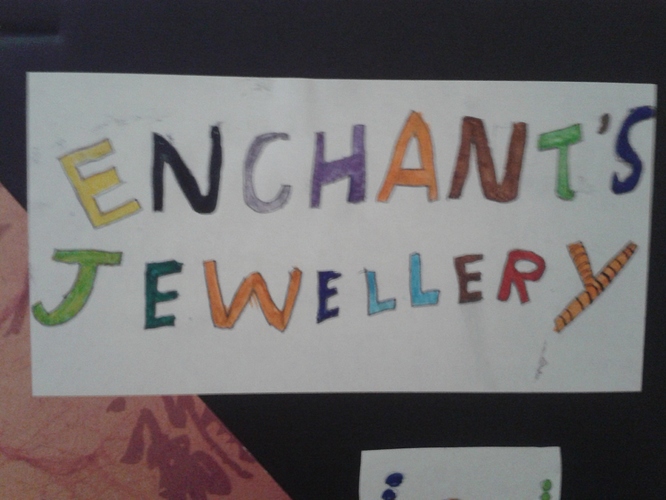 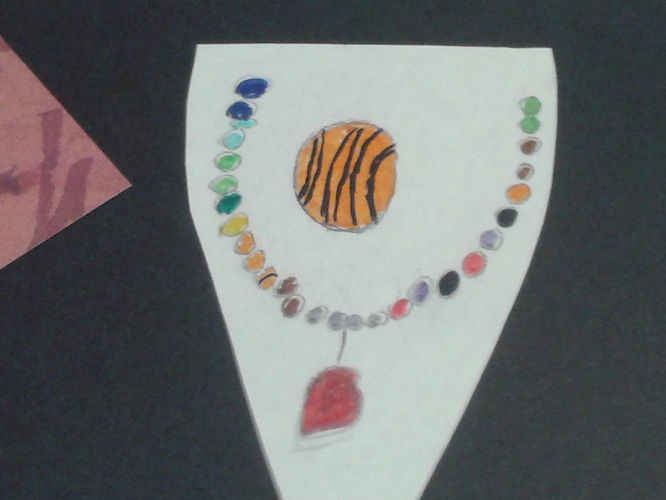 I named the made-up company "Enchants Jewellery" because the theme with crystals is enchanting and it’s a good unique and catchy name. Jasper icon in the middle of the necklace logo because it’s quite iconic looking. The Ruby crystal is hanging on the necklace of the logo.

Both the logo and the name of my projects use the colours for the 20 crystals:

These were my First Initial Ideas: 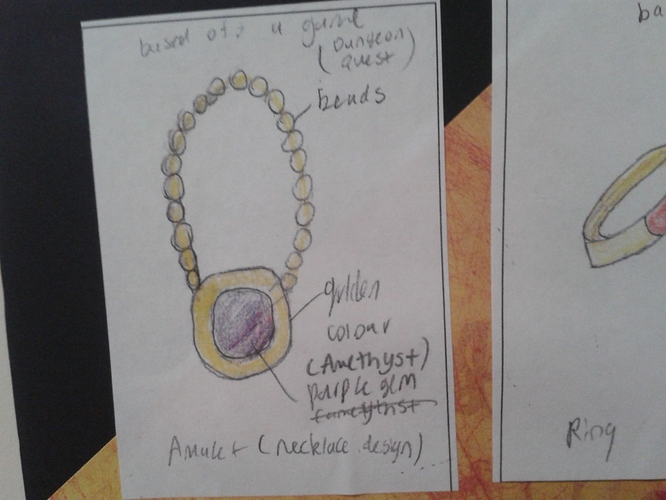 My first Initial idea for a Amulet (Necklace). The amulet I planned to be all gold painted with the amethyst coloured gem in the middle of it, using sequins as a way to do that cheaply. Based off of DQ of course. 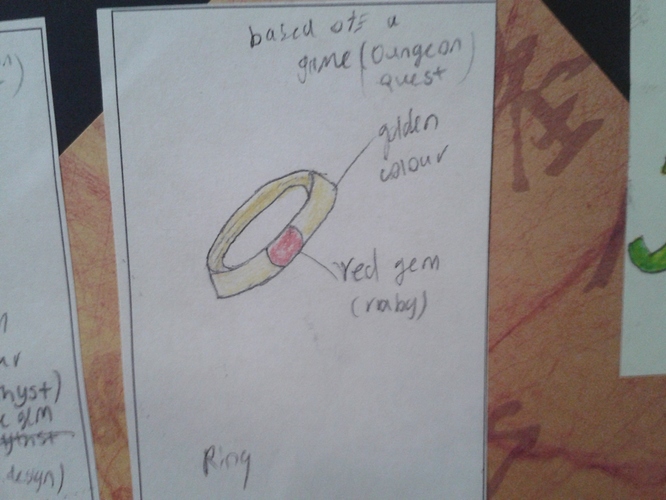 This picture says it for itself but I will tell you anyways. The ring is yet again based off of DQ but I planned to have the ruby coloured gem in the middle as well as coat in gold spray. 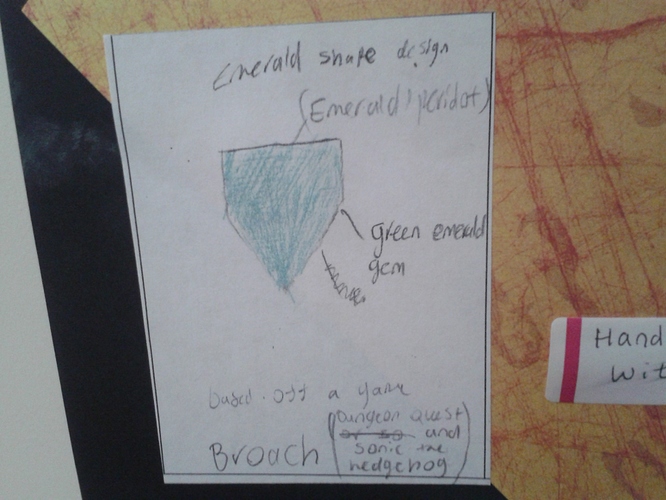 This picture was my initial plan for a Broach and this is green, not blue like the camera shows. Based off of DQ as well as Sonic the Hedgehog Emeralds. This is Emerald shape Design but planned to use Emerald and Peridot colours.

However these initial ideas were modified into my final piece due to limitations in my school and the actual product itself:

These were made with expensive Fimo clay I believe and heated up in oven so they are set. 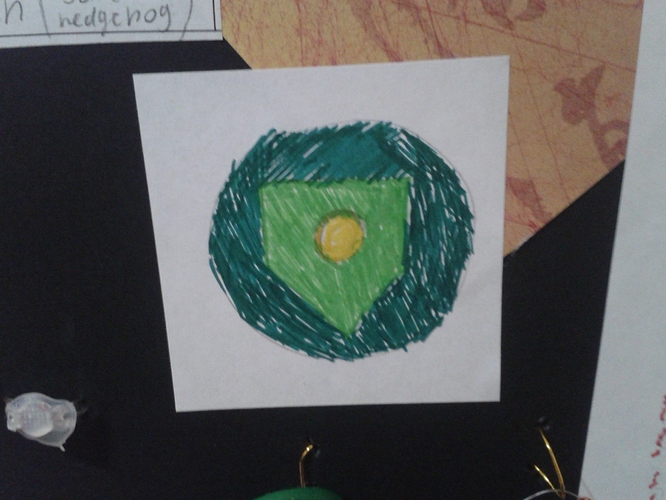 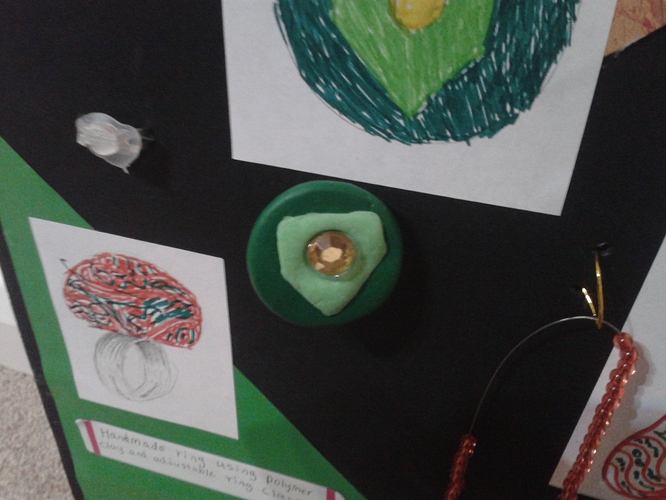 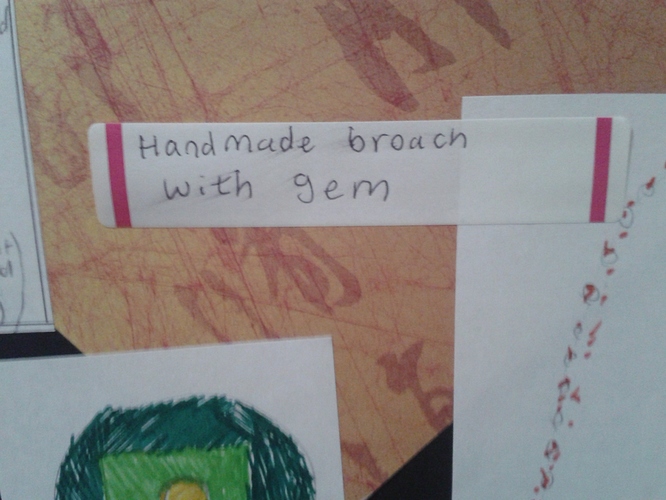 This is my final piece which is the Emerald coloured circular Broach. It has a Peridot coloured and shaped middle with the citrine colour gem (sequin). Based for the green crystal colour schemes. 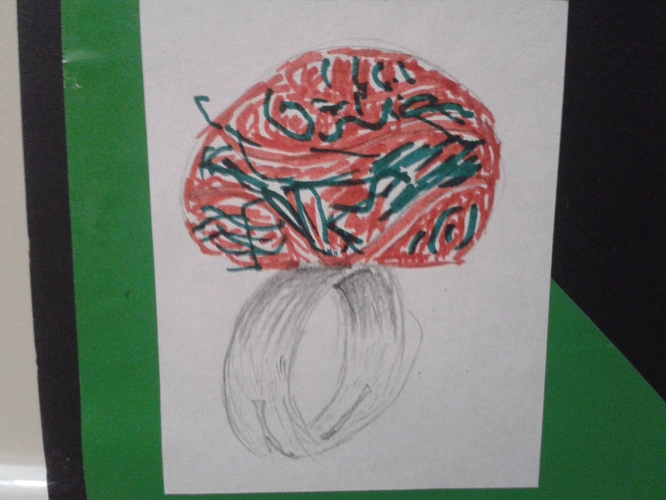 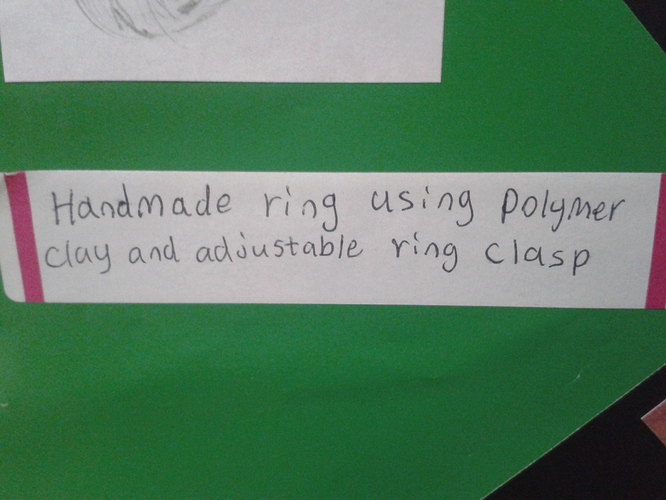 This is my final piece adjustable ring. Nothing like my initial idea but still very good for DQ based Jewellery because I couldn’t get Gold Spray in my school at the time. This mostly uses the colour red for Ruby crystal mixed with Dark Green for Emerald crystal. Its a mix of ruby and Emerald colour together.

However the actual ring is missing and so I only have the Clasp with glue from glue gun but it is so similar to the drawing but more shiny and appealing. 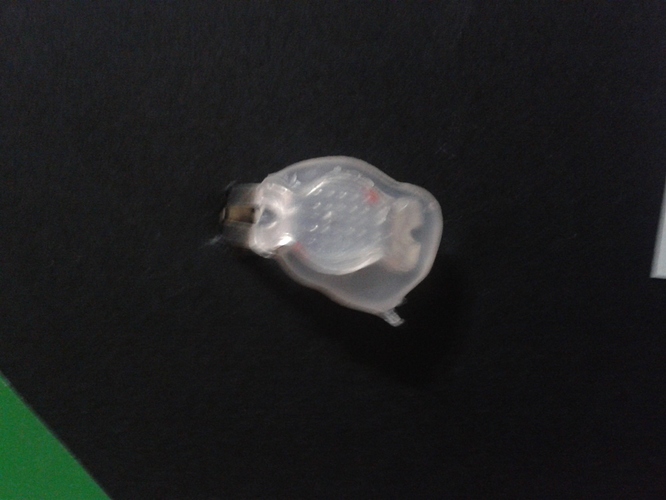 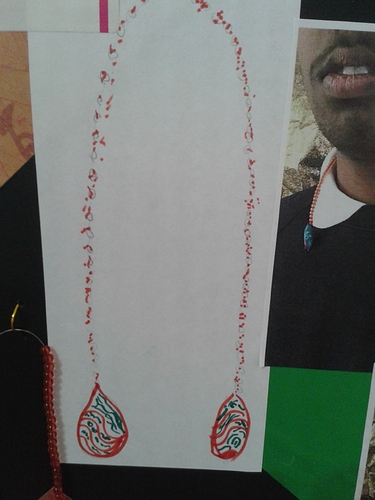 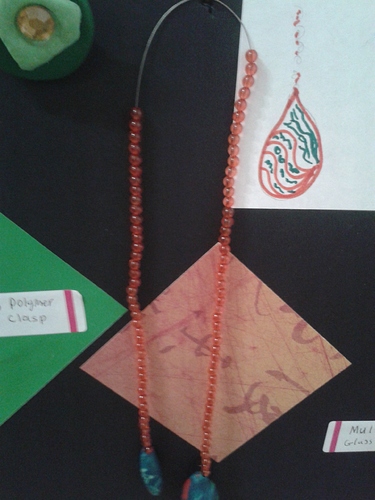 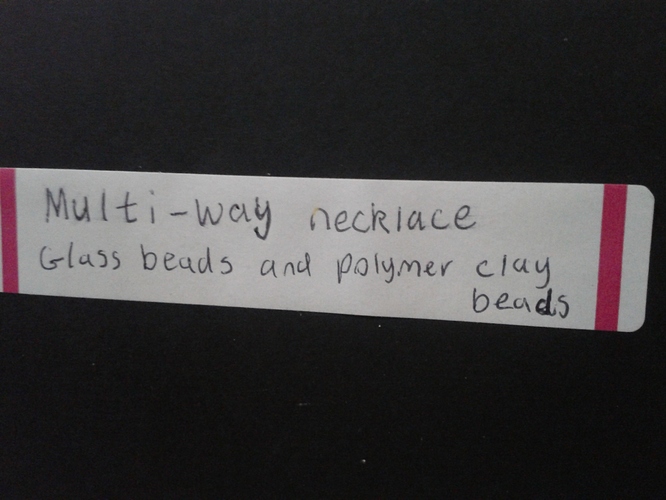 This is the multiway necklace with Ruby coloured Glass beads and the polymer clay beads at the end are a mix of red and green (Emerald and Ruby).

Heres a picture of me wearing the Necklace on the display: 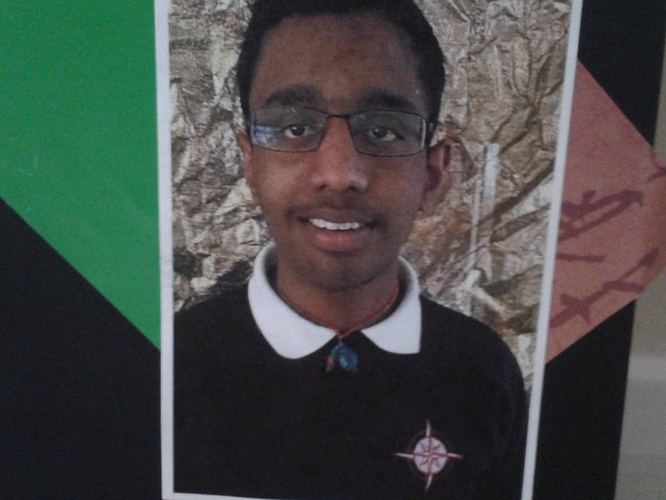 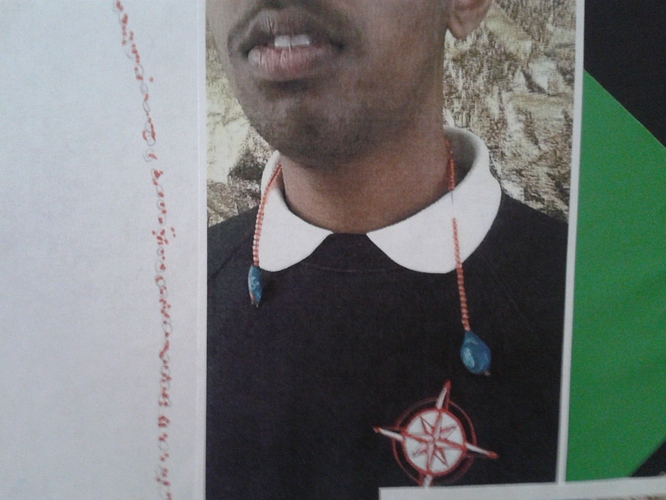 Yea that’s right, this is my true face as a student at the time this year 2016 and I’m sure you know my real name in my profile picture Justin Thomas.

Heres some ideas that I had for DQ Jewellery I had that I planned for but it didn’t come to fruition because there was no time. 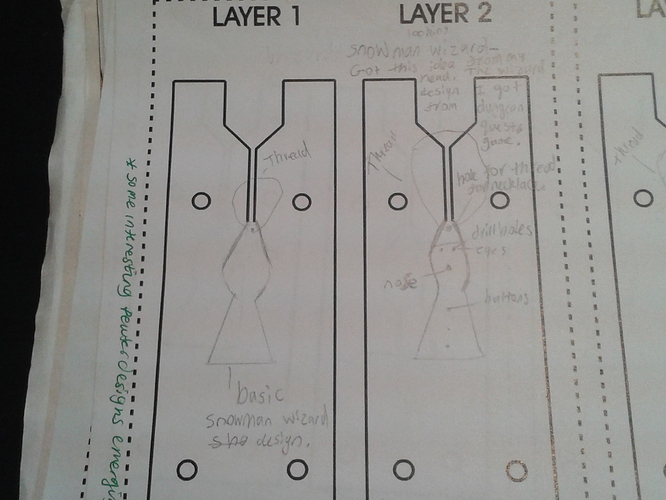 This was my wizard design I was going to make by pewter casting and it looks like a snowman by planning but these are just layers 1 and 2 I could combine to make a full design. Based off DQ of course. 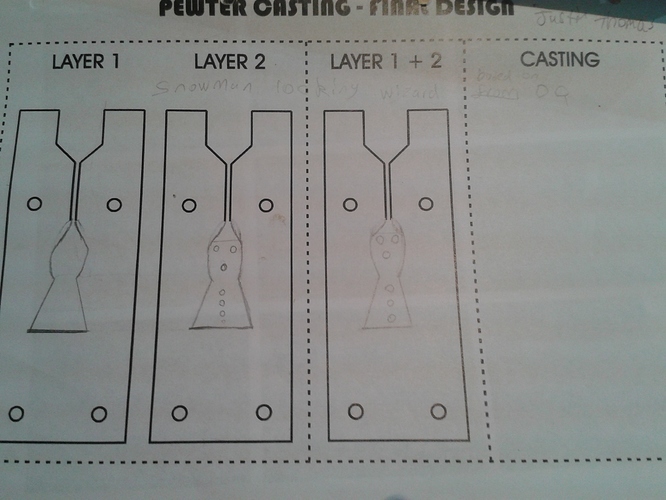 This is just an idea of how I wanted to make the pewter cast wizard design. 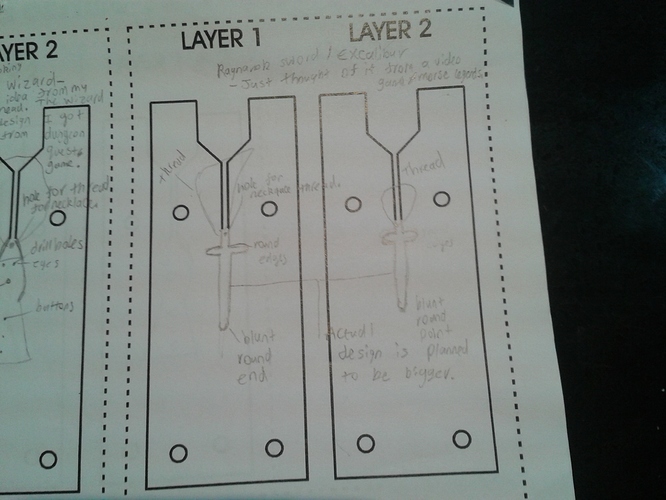 This was my second idea which was a pewter cast sword and I based it as Ragnarok/Excalibur based off from Morse Legends and DQ. Has round edges so it doesn’t stab.

This was how much time I had to make these projects from school after learning all the skills:
I had only 2 lessons on wednesday once a week in my school years to make it in 1 year. 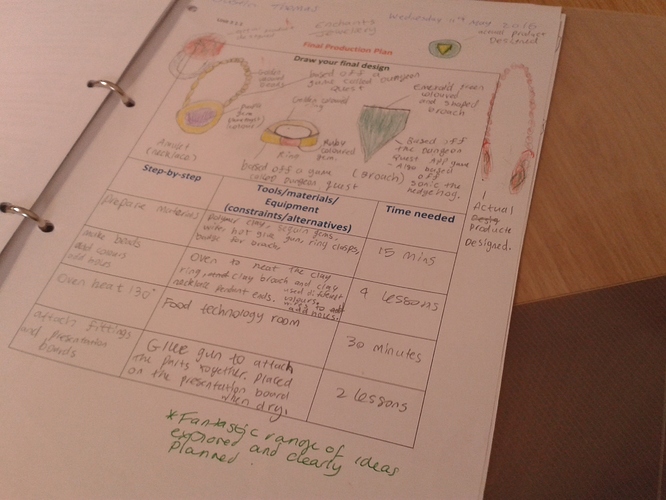 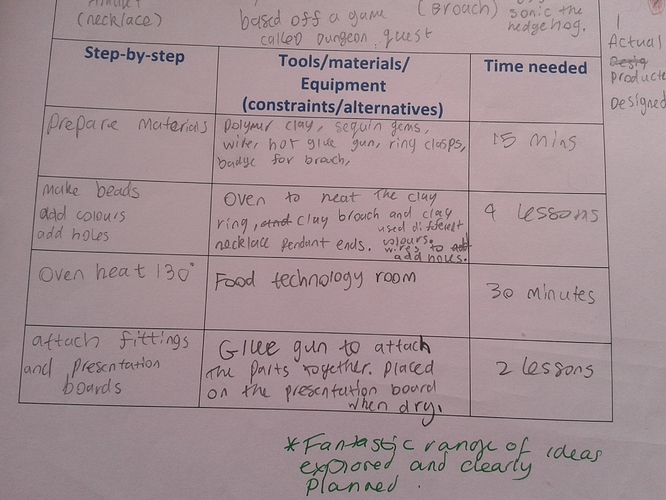 To put to perspective, I took 7 lessons which meant just 4 weeks of doing it since the 2 lessons only occured in just Wednesday each week. I get Jewellery Qualification level 1 by using DQ inspired designs because I just really like the game DQ. This is my tributes to the most awesome game I ever played!

nice you’re making a real life DQ how about do a cosplay too?

Not sure how I could try that but ok I guess? I might do a hobby of drawing but nothing huge. Not too good at Art but I’ll try. Thanks for the suggestion though about cosplay.

That is outstanding!! Thank you for sharing.

You’ve got some cool stuff there. Very nice

Your welcome :). My intent it was since my idea randomly popped up in my head to share it. This post took so much effort to post because taking the right pictures without blur/shadow was tricky. Initially, I didn’t have very many ideas but DQ just happened to be a bright idea. The theme of this jewelry was Classic so I decided DQ would definitely fit in with this class of jewelery.

Furthermore, trying to write this post on phone was very tricky so I ended up relying on using my charger as USB for images, and the computer to upload and see the images. I can’t use desktop mode on phone yet and be comfortable with it :(. At least the stress of trying to post is over and getting good night’s sleep for a few days. Most certainly, no more frustration!

He doesn’t lie,it took effort to make the post.I didn’t get the computer back for a while that night