I’m new here, only allowed to upload 1 picture, and dont know if such build has ever been posted.
This build is for hiking higher floor like 3k+,with no luck/drop affixes inside.

The idea is: when you press still the primary skill button(basically u just need to PRESS STILL attack, guide the direction, and click stealth from time to time),you got chance to trigger blinkstrike,then you could also trigger clearcast/specialist/mirrorcast. Sometimes you could see that blinkstrike is triggered for 3 times.You would also teleport really fast with this build.In the test,for somehow,blinkstrike proc is less triggered than ninja,so i abandoned that. By the way,this build is relatively cheap, with some certain affixes so you dont need to roll many times. 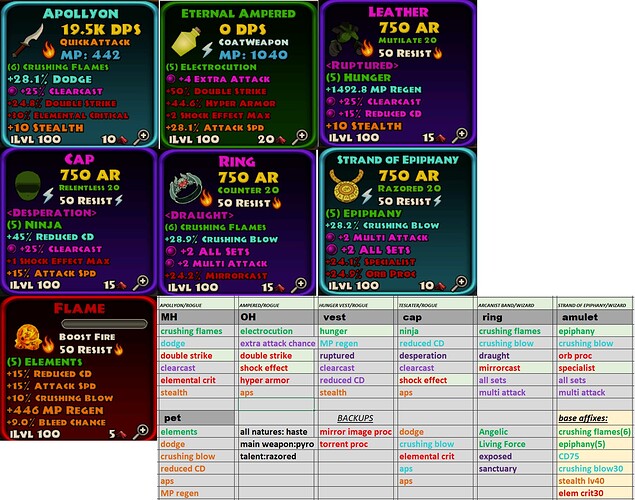 Snipaste_2021-10-27_23-22-081811×1425 311 KB
I got a clear chart for you, you could see doubleStrike/shockEffect/3Cast… are not “rollable”. They are from certain equipements,i noted their names here.I basically make combinaisons with excel, its really convenient,so i wouldnt need to cost crystals in game to test ideas.
There are some optional affixes here. And the bone/base affixes for you(rogue),with only these you can already hike 3k+ floors(Edit: 50+dodge). For other classes, i dont have good ideas. Like warrior with 75dodge & 95block & Sanctuary could still fall before mythic enemy. Maybe you could still have stealth as special skill in costing 2 more epic stealth affixes.

Any suggestions or questions? Let me know.

which attack is putting Shock DoT on your enemies? Counter Talent doesn’t work without Legend Reflect Damage Affix. on top of that, I believe that Reflect Damage does Arcane damage (last time I tested it was over 2 years ago).

if you replace Bleed Chance with +10 Stealth on your Pet, and replace Stealth with +100% Weapon Damage on your Apollyon Dagger, your damage will go up for all your MH Skills and Proc Skills.

the rest of the build looks good.

Well Element set will do the shock stack(like i mentioned above). Talents really matter little, maybe we could replace it by deception. In my conception, dmg is mainly from CB hit amount. If i add MH dmg, CB dmg would be affected? Well the white/purple dmg(normal dmg) number may go up from 100k to 400k, but how much time would it take between this 300k? Seems short.

lol, after reading your post twice, I still missed the Elements Set!

Bleed: does 100% of the attacks damage that caused Bleed every second for 10 seconds. Bleed has the same chance as all other attacks to cause Crushing Blow.

Critical Hit: all of your attacks, including Bleed (but not Crushing Blow) have a 10% chance to do x 1.5 Critical Damage.

Crushing Blow: gives a chance to do 25% of your enemies current Health in damage. CB is not affected by any other damage modifier except for Crushing Flames. I don’t believe that CB can cause Bleed (at least not that I have heard of or read on the Forums).

I read in an old post, a Developer said that Crushing Blow is a different type of damage attack that directly reduces enemy health but is not affected by other damage modifiers. just think, a Critical Hit with +350 Critical Damage, on a Crushing Blow when you first hit an enemy could kill it with one hit (except for higher Tier monsters). with Crushing Flames, only Legend & Mythic Monsters couldn’t be one hit dead, not sure of the Epic monsters. ahh, I found the post.

Yup, we’ve historically used both rare and elite depending on the context, but you’re right I think I finally cleaned that up to be “Rare” everywhere

“Rare League” and “Rare Difficulty” still sounds funny to me. And yes, Crushing Blow wasn’t intended to be the only way you kill enemies. The danger is that if you have enough crushing blow, and it was useful enough, the actual damage you deal doesn’t mean anything. Crushing Blow is meant to be a supplement, and mostly geared towards PvE. …

there are a lot of posts and threads about Crushing Blow if you want more information about it.

Well, in that case, i would replace electrocution/shock effect max by other procs like torrent to increase hit amount(also angelic). Then WOW i would be even gladder, cuz i always felt a pity that cant add more procs.

Quickattack hits 4/s as base. With 75 aps, how would it show on the offense panel 5.8 hits/s? And how do multiAtk/extraAtk work?
With a mirror img proc, our images’ hit frequency is affected by aps?
What if i add blinkstrike proc? Will it have another CD differed from ninja’s CD?
angelic&hunger 's aps are over cap?

By the way, instead of taunt and explode, i prefer triple blinkstrike, its triggered uncertainly and is super cool

I’m not talking about a little 300k difference, more about a 4.5 million difference.

maybe put in Demonic instead of Electrocution, and then the other Procs. with a Master Myth Stone, you Proc more often, so more attacks with less damage, hopefully your DPS goes up instead of down.

normal, magic, & rare monsters will die fast, but WD% will come in handy against Epic+ monsters. there is a thread where some player mentions that around floor 13k (don’t remember if that’s correct, but around the teen thousands floors), the monsters have INFB HP, so you only need CB to instant kill everything, since 25% of INFB is still INFB. he even had a video showing the gears he used.

MA: each one does 50% of Quick Attacks dmg. MA +4 is 4 extra attacks, each doing 50% damage. for some skills, you get the extra attacks, for others, it’s just extra damage. either way, you are doing extra damage. this only works on MH Primary Skills. if you use Discordance Mythic, MA would apply to your Special Skill instead.

Mirror Image: as far as I know, the MI attacks just as fast as your Character does. MI Proc does MH damage, but the attacks don’t get the Skill Point boost of the weapon/skill being used. now, if you put points into MI, then the MI will do more damage.

Angelic Set: it affects the APS directly, so it has nothing to do with Attack Speed affix cap. Drought Mythic is the same way.

Hunger Set: from the posts I’ve read, it does go over Attack Speed Cap. I’ve tested it with Boomerang, but I need to test it with something else to get a better feel for how it works and if it actually does go over Cap (for my own peace of mind).

Really thanks for responding

damage versus more hits, or even having a mix of both. there are builds with 100s of billions to 100s of trillions or higher with high DPS from all kinds of attacks.

your build uses CB/CF to get enemy HP to 25% as fast as possible, but has low damage/DPS for the last 25%, especially as you go to higher floors. your damage should be 100’s of millions to 10’s of billions considering the floor you’re at. either normal damage or through crit damage. or boosted damage from elemental effects.

Edit: Clearcast doesn’t affect the cool down of Procs, but I believe Deadly Arts Set does.

Specialist & Mirrircast don’t have cool downs. they are just a % chance to cast your spell again for free with a one second delay.

Draught affects Attacks Per Second, but not Cool Down or Attack Frequency.

on your build, even if you put a few extra Proc Skills on it for more DPS, they are still doing low damage. the WD% means that all those Procs you mentioned are doing a lot more damage, which means lots more DPS.

ok, after reading first post again, you are around floor 3k and climbing. I am in the high 1800s, and need to upgrade my Climbing Build a little. right now I’m using CF on MH & Ice on OH with Demonic & Frostbiting for the final kill. I’ve been using this Build since floor 800ish (knowing that I messed up some Items making it) and am planning on fixing my Crafting mistakes for the climb to floor 3k. then it’s time for a whole new build.

Thanks for great post about New Ninja Setup, how can I build the same setup for me?

that link doesn’t have anything to do with this Thread. the link is about how some guy named Ninja built a gaming(?) pc set up (at least that’s what it looks like to me) and this thread is about a Ninja type feeling build in Shiny Box Dungeon Quest game app.