So i had been having some trouble trying to collet enough gold to get everything that i wanted. So i came up with a build that i could afford given my current stash of items and this is what i came up with: 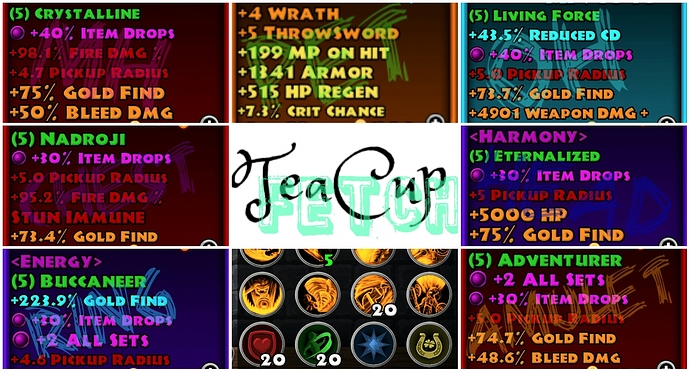 pixlr_20160127183117965.jpg2048×1105 1.4 MB
I like to call it fetch because i use a dog with it and its pick up radius is rather large. I wasnt interested in luck too much because i prefer to make my builds using my plans and not just with powerful items although they are nice, for luck though i set all of the items natures to luck and i got a 150% natural luck bonus (even better with difficulties) also i like the build because you never have to stop because you collect everything anyway and my affixes arnt even maxed yet.
I found the ring with the goldfind on so that saved crystals, the item drop mythstones also saved crystals and i had already partialy crafted the horn a while ago. The main peices that took a lot of crystals were mostly the head and ring but the amulet cost a little amythest too, bu overall not to difficult to collect the raw materials.
For the horn you might like to use HP 5000 instead of the cooldown rate if you dont have enough materials
I only use the pet dog for wraith as it destroys all obstialcles nearby and saves time on floors, otherwise just a well made dog will do.
My main attack is scalp since warriors are naturally good bleed damage users and my stats page says it does 1M damage per second and my scattershot says similar so overall thats 2M per second against bosses but normally its just run, spam scalp and not stop.
The build is for PVE only and not good in arena at all.
For anyone that prefers to copy plans or would like to see how i plan my builds, here you go

on your plan pic. OH weapon set affix, u dont need satyrs spirit because u not use MP, u use energy. since your MH special is scattershot. bucanneer will be nice on it to boost your damage.

Apologies, i did notice this after using it a little while so i changed it on the final draft and forgot to change it on my design.
As a reference to anyone else, the top picture is finalised but luckily the saytars spirit doesnt cost anything to have but it gives armour and if you cant quite get the energy its not so bad to have, otherwise life force is a much better choice

As I stated before, love it as a low cost build.
Perhaps, once viable, a Lilith pet would help you out. Unless you’re dead-set on a dog, which is understandable.

yea… i think lilith is better than hound. since they not that useful anyway… you already got over 20 pick up radius… what you need dog for… it better to have healer then picker… since dog also lame sometime when picking item… the delay is infuriating

Okay so just about to finish with this build, heres a final updats of what its become (chest is slightly modified for the new build) 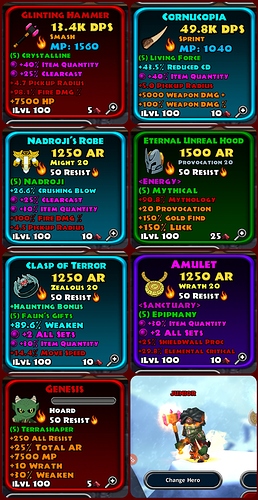 I still have em O.o . I never use them though as my treasure. Even better, I had the eternal legacy Nadroji from 2.0 also.

Im too lazy to make a whole thread right now but heres my build, its mostly finished

at least theres clear evidence taunt proc can be useful and reliable, most importantly. i may try again later, as my first try, i was less then impressed.

I use taunt proc a bit but I haven’t shown evidence so that’s the issue. Well it’s good that @TeaCup did. That build is pretty cool. Cyclone also ftw.

Yeah. Taunt proc ftw. I remember fortune bringer having it too but when I first tried taunt proc before I got better phone , well lag slowed me down. Nowadays I can taunt away with no effort. Taunt ftw.

I know I liked aftermath because of meteor taunt but taunt proc is better or just as good in any build . Aftermath pressing shatter only days are over unless I add Clearcast and maybe specialist or reduced CD on meteor procs .

guys can you tell me what is the four mythstones to make a sanctuary? i really need it guys


I just recently got all my recipe’s filled out, now I just need to start making the Mythic Items and seeing how they work in the Real Dungeon’s.