Hi,
By the way I am Pedro from Dungeon Quest Allstars group, where the honest players are in. Its been two and a half years since i played this game. And my favorite hero is the wizard, coz it has more unique skills than the others. Now i just wanna share my own build for those wizard lovers here, and hope that you will like it

I called this build the “NECROTOXIC MACHINEGUN”
(Necrotic Poison) and machinegun for its fast skullshield shots. It was inspired by Ms.Kallen’s skullshield but i tried to make my own that could clear the floors faster.
Questions:
-Why did you set Equality on it?
*Equality’s dmg is based on the HP and MP equivalence. It boost dmg a lot.

Momentum+Adventurer creates high dmg too. And also the Pathfinder boosts dmg as it dodges all of the attacks.
By the way, my skulls special skill is shieldwall…why? Because it adds movespeed also for momentum.
Bombard is just a support skill. You dont need to use it in floors. All you have to do is to run all the way through the enemies…

-How bout your HP? Its too low…
*No problem about HP. Just run through and dont stop. Skullshield will do the job 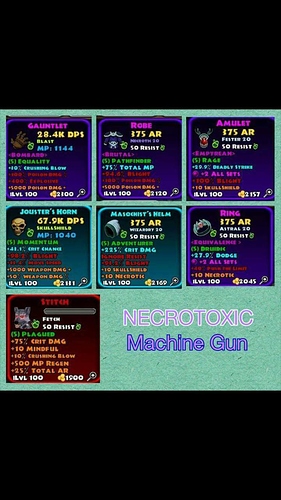 Guys sorry for the late post. I tried to post it yesterday but my mobile data is too slow. I forgot to edit the info. Im in floor 1238 by the way.

. I didn’t even know your build was going to come out but nice build. Arcanist goes great with poison and that could be a suggestion for add ons or a future build. I appreciate the effort regardless

Ohh thank you so much sir. I really appreciate ;). I was aiming the 5k floors right now hehe

Thanks sir. Hope that it could help other wizard lovers too hehe

anyways, I’ll be posting something for every Allstar on our facebook group

Oh thnx bro… I got same eternal item of the Arcanist and Ascendent Set. For now i was planning to make a greater build for it.