Hello guys. My build has evolved a lot since my last post Need advice - Aftermath build dying a lot! – thanks to all of you who contributed with a goldmine of information. I have passed from level 200+ to level 400+ . But now I am struggling to push the built further and I am stuck with a problem – every time I want to add something, I need to remove something else which can also have an important impact. Trial and error is costing me a lot of crystals; please provide advice! (Not screenshotted but I have a Plagued Pet). 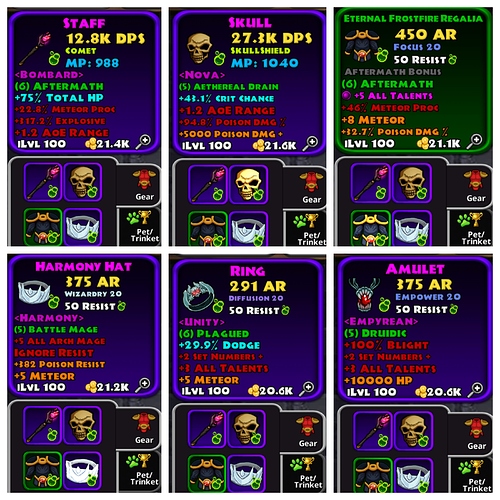 2 – Battlemage – Is this a good call? Combined with the other + dodge I think PathFinder could be a better choice. What you think?

3 – Druidic – Since I removed my +2k Regen on ring and amulet to replace with +Set and +Talent I am wondering if it is still a good thing to preserve. I am full poison and combined with Plagued it used to be great but not sure anymore. Though?

4 – Aftermath. It requires a lot of affix and with this setup I only have +34 Meteor. I think I should find a way to get it up to 40 but I can’t figure out what to remove. Though?

5 – Any other advice? Thanks much guys I am kind of stuck at level +400 Epic/Legend.

Maybe remove the AoE range on your weapons and put +5 all skills using mythstones. Remove ignore resist in the hat the the poison resist and put +10000HP in exchange. You choose what other affix to put. Change your ring to effective in exchange for the removed ignore resist. Remove dodge and put more crystal total hp%+? Remove the +5 Meteor on the ring and put another +10000HP because you would already have 20+10 from the 2 +allskills + 8 from the eternal and +5 from the hat so that would already have been on the limit. I don’t use dodge but I have 4 +10000HP and 2 crystal +75% total HP and its enough for me climb floor 800+ mythic 3 without problem.

i think pathfinder would workout more efficiently in an aftermath build

I think you don’t have enough damage reduction to your gear that’s why u can’t stand at floor 400+ , try this combination for damage reduction
Defiant = increase 25% damage and damage reduction and it will increase by 5%(per rank) of total HP missing (this set affix cannot be obtain by using amethyst so you must find it ).
Equivalence(Mythic) = you will get 50% of reducing damage taken + 50% resource cost of your total HP and MP equality

And as i see u have cyan affix of dodge to ur ring try to replace ur plague set affix to pathfinder = increase damage death and damage taken by 12%(per rank) by total % of ur dodge(you must change ur ring to rogue class using jasper xtal to get pathfinder set affix, because pathfinder can be get at rogue class only )

Plagued to Pathfinder, add one Crystal dodge. Druidic to Fauns Gift and add one Crystal luck. This will help with survivability and provide some luck to get more legendaries. Also you can Aftermath to defiant and you should also add Crystal critical damage.
With changing ignore resist to effective there is a problem when you get a map with immune affix. Monsters can have immune resist to their usual weakness and you won’t kill them with effective. Effective is ok but imo ignore resist is more safe and easier to obtain.
Also get yourself a resource mythic. Bloodmagic or Energy or Equivalence.
Unity mythic isn’t the best, with mentioned above in my post Fauns Gift you will get more resist from epic affix all resist than unity. It’s that this mythic doesn’t get multiplied by sets.
You can also change explosive to blight. Poison cloud is doing work better I think.

Just keep in mind that HP eventually becomes irrelevant the higher floor you go.
If you still want to keep your aftermath build. I would suggest spend some affix in dodge and block to synergize with your fear and blind.