Need advice - is this good to build a flintrock-roque-hireling?

is it possible to build a good hireling with this weapon?
Found it a few moments ago… 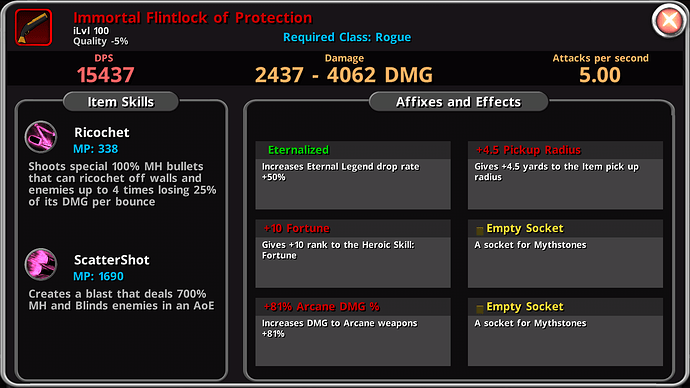 Eternalized doesn’t work on hirling but it does work on the main character whilst hirling does whatever he wants with other weapon.

Although if you remove Eternalized and everything except 100% ED on that flintlock, yes.

That´s sad, I play with wizard on main…

But maybe it´s a good weapon to keep

Wand farm build. Haha jk but it’s an option. I’m running Haunting Set + Aftermath wizard. I could use warrior totem to help the wizard get buffed MH by 100% .

But that weapon is great for keepers . Flintlock with ed% for any build and if you had rogue main, it’s even better for farming. That fortune 10+ though.

Yeah ! That Haunting Bonus is now 2Slots away , now unlike before it was 4slots Haha

Yup. I agree. Although I don’t use haunting bonus but it does help and great with haunting build of course. 50% Clearcast almost reminds me of aftermath but for any build.
It also reminds me of old deadly arts when you can literally spam any skill with deadly strike often or so.

this surely help . Just to save up some slots , Solo Mode maybe ? If in hireling maybe it can be main that triggers arcane , for arcanist debuff

Yoo, Cuzeg I’ve fought against your Lucifer today, it was 2-3 ( for you ofc xD). I noticed that you use orb, what have you done to make it always cirt, even worse deadly? Once I’ve been hit, I’m dead…
Wasn’t this supposed to be the seasonal maidens build? Also, I i wouls love it if you gave me some advice on my build.

It’s will of the force build. I’m glad I’m finally winning though as I thought I would never win often in AI mode. AI setting and storm ftw. That build is very different to seasonal maiden build.

Lot of trial and error and even trying out storm. I thought my build would be as good as dead but it’s good that it isn’t.
Here:

[image] Updated for patch 3.0: Sets Malestrom (3): Malestrom gives 22.5% proc damage which isn't as much as 60% from living force at PvP but it's still something. Mayhem is another option if you want proc damage as 3 procs also does 22.5% damage but it also has the stun chance. However stun is nerfed to 1 second which is small but could make a difference with Stagger. Electrocution (3): 30% damage per stack Debuff from Electrocution so 120% extra damage when enemies below 25% HP if…

That’s absolutely remarkable. So that’s why you were able to beat me. Not many people could beat my rouge tho. Blinker ftw