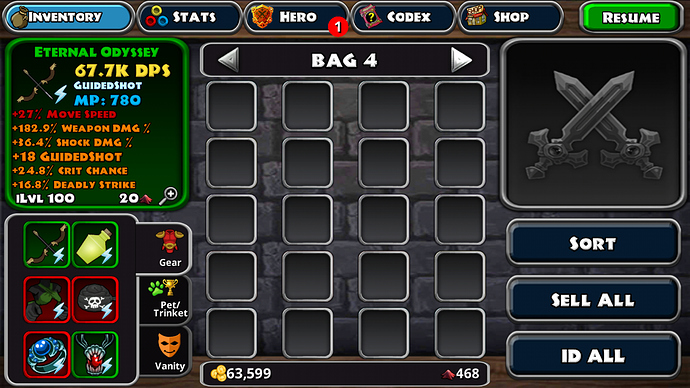 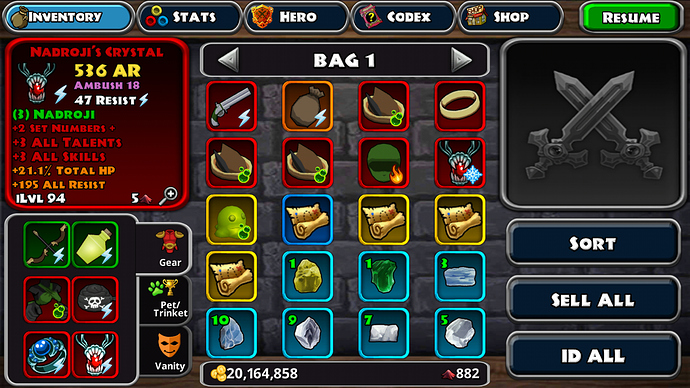 Firstly I’d focus on getting as many crystals as possible before starting a major build and the best way to do that is by equipping as many item drops % as possible and doing floors that are easy. The best way that helped was using floor 500 very easy or easy mode and getting crystals that way. If you have hirlings, even quicker but any difficulty helps too.

Another helpful idea is using dust and crafting Eternals, then converting them to crystals to get started but don’t use too much dust as some is still needed.

As far as how builds go, make sure you have 4 Multi Attack, 4 Extra Attack, Skilled Mythic, Guidedshot 20 or 40 hero points , potential skilled mythic if you can afford it on chest and if you find a legend that has Push the Limit 50%, that’s good one too.

What build do you plan to make though? An easy elemental build can be fire + inferno + crushing flames + crushing blow when finding crushing flames legends .
Also Poison + Plagued + 300% Blight . Do add 100% weaken at least to double your DMG output. Anoher good one is Frozen set + 300% Frostbiting with high DMG.

Ascendant with high weaken on hirling, specifically wrath talent warrior hirling or a hirling that attacks many enemies or manashield+ iceburn wizard to place arcane debuffs for both the character to get increased DMG like with weaken.

Sets you can use: Adventurer , Momentum , Angelic for attack speed +dmg, Hunger for more attack speed but reduced CD as bonus and it can synergise with alchemy mythic for more DMG or other mythics. Not the best with energy mythic unless you almost run out of it and deal lot of DMG that way.
Pathfinder for dodge to increase DMG , the element set such as Crushing flames+ Inferno for fire build , Plagued for poison , Frozen for ice build , Electrocution for shock build or build that use shock buffer, especially if hirling uses shock Debuff. Arcanist for arcane Debuff + weaken. Rage set if you have 225% crit DMG and 45% crit chance but want to save crystal affix slots and other slots.
Many set possibilities you can use.

Also get as many 100% ED as possible. 300% is the sweet spot. It can only be found on specific legends but it isn’t hard to come by and it greatly buffs weapon base DMG. Power 103 combined with bow having 200% WD (or 400% if it’s eternal, but Eternals cannot be editable by crystals except nature , talent, class).

But to best use a set, make sure you get Nadroji legend with +2 All sets on it. 2 for 4+ All sets. Another way is by using Elixir Mythstone on ring and amulet but those you have to afford. The best way to find them imo is by floor 500 crystal farming, even at very easy mode.

Crystal affixes: Get 90% weaken +30%epic weaken for the 100%+ aka 120% weaken for ×2.2 more DMG weaken (or alternatively 4x 30% epic affix or 2 Eternals with epic weaken) , 225% crit DMG, 45% crit chance , 30% deadly strike as an option for Crits , 30% dodge definitely (high dodge also works well with stealth apart from Pathfinder and generally good survival) and the last can be crushing blow 30%. That’s recommended but you can change at any point. Attack speed is very good for now at 45% for eg.

Btw , there is the deadeye 20 talent that gives 20% deadly strike so you won’t really need crystal affix to deadly strike super well and that means on rogue, you can replace that deadly strike with Attack Speed, another weaken, 45% block if offhand weapon crystal affix since block won’t roll on other weapons and many options in general.

after i read that ur russian xD ,I read ur. Post with a russian accent in my mind xD

Thank u so much. But what about my hero points maybe I must to reset it and spent not like I did it? 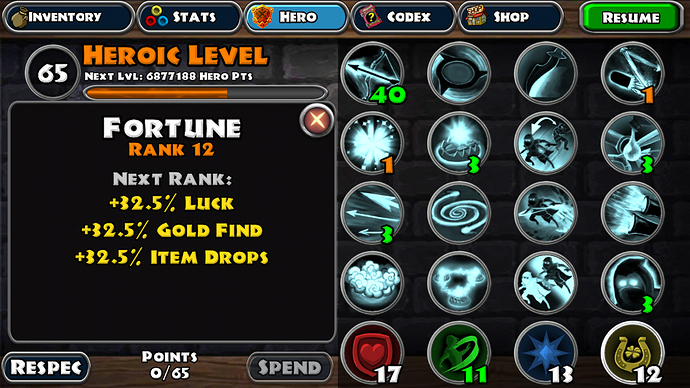 Yes. You need gold though. Fortune hero points amazing for farming and then a hero point into a skill you use , i.e guidedshot.

Use a diamond on it to reroll affix stat

Can u show me screen shot please 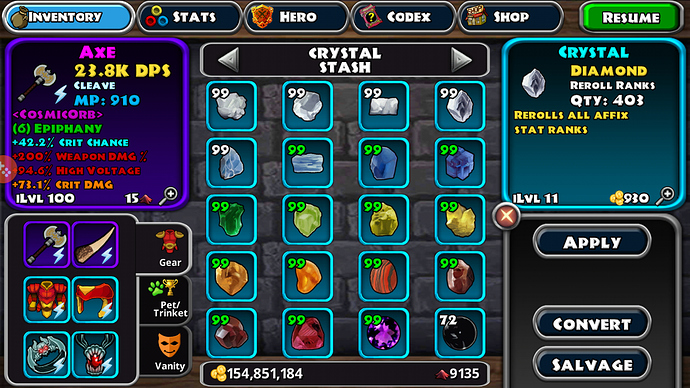 For future reference, Additionally, you can reroll all new affixes onto your map with larimar crystal 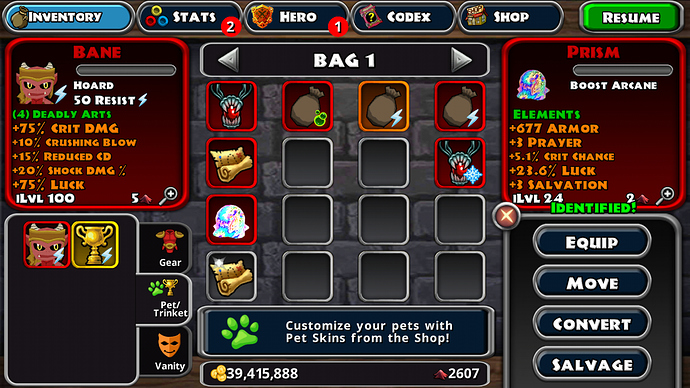 Red (Legend) wont allow for any other affixes except the special affixes bound to legend maps. Same stands for eternal (green) maps.

Orange (epic) maps can have packsize, just use a larimar crystal to reroll all affixes new if packsize isn’t listed.

As for pets, it’s subjective. It really depends on your build.

TIP : save all your legend and eternal maps for use with monster spawn boost. You can get free 5 minute boosts via ad offer… Or buy an hour boost potion. I prefer the hour long boost. So I save up a pile of them.

Really green map? Is it real?) Maybe u have discord I have tons questions maybe u can answer on it?

Yes we use discord.

The deadly arts is definitely better. But it depends sometimes in your build. As for the pack size you just have to reroll it over and over again using diamond. Eventually you will get it. Maybe about 4-5 sometimes just 1 roll but if you’re unlucky it can reach up to 14-20 rolls xD