Hello guys !
So Yesterday,
I use ruby on armor but there is no
Ignore Resist option when I try to make farming build from some expert on this forum. I dont want to spend another ruby for the wrong build

Need your help senpai ! Thanks

You can get it, but your chances are low my dear.
I am tired but maybe @golem or @Mr_Scooty can help you.

If “ignore resist” is your only goal,
Craft this in your codex: 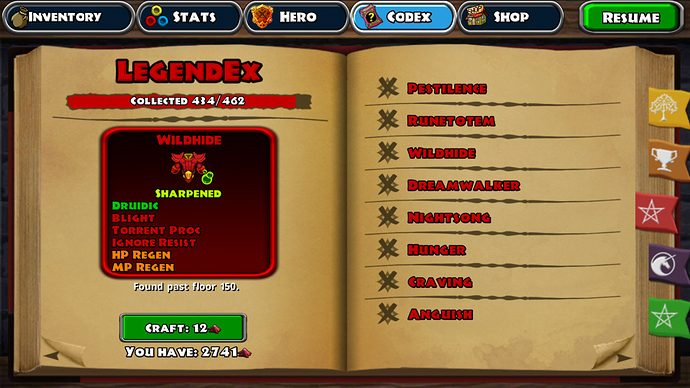 there are around 40+ Legend affixes, maybe 50+? about a third of them can’t be rolled with Ruby. when using Ruby, you are given 6 random choices to choose from, so if you aren’t lucky on your first roll, it might take a few Ruby’s to get the affix you want.

I have gotten the Legend affix I wanted on the first roll, in the first 5 rolls, and rolled 30 times without getting my Affix and running out of Ruby’s.

here is a good post on affixes you can’t get, or have to meet certain conditions to get. hope it helps.

I did. But then i got another light blue skull with blue affix eq +90% weaken its similar right?

If you have cyan colored 90% weaken affix, you will deal around 90% more damage for 90% of the time - much better.

However, if you use ignore resist at the same time, the 90% weaken will be negated.

Everything comes to all that tries

I’d personally go with necklace because you can get nadroji on head neck or chest. You want the nadroji bonus .

so confusing
.
And my 2nd question guys,
How to get pet with those green afixes? I tried using Crystal but it can’t ?
.
And the last question is how to get that and afix?
.
Sorry i have too many questions

Why is this happen? A lot of monsters following me, but they dont attack me, and also they dont die 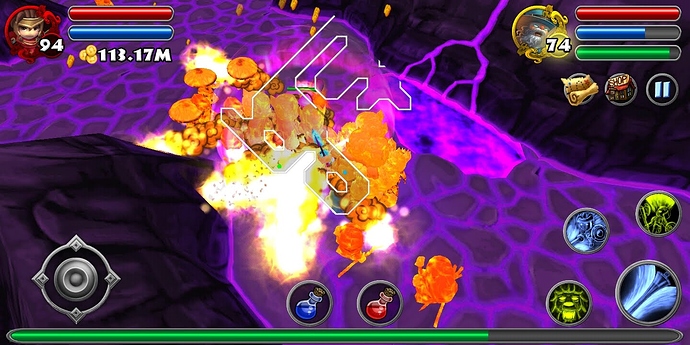 Lmao, sometime it also happen to me, bug maybe

@freaky45 if you go to Options and lower anything that might have an effect that slows the game down, try that. also, Challenge Maps that have a high Pack Size, usually +130% to 150%, depending on your device. the problem is when there is a lot of loot on the ground that isn’t picked up, or a lot of monsters, it can lag the game enough that some monsters become Zombies or Ghosts when they die. if you get far enough away from them fast enough, they wont follow you, but it makes using Skull Shield frustrating.

since you are using Skull Shield, you need to use another Skill to kill any monsters that those Ghosts or Zombies are near, then leave the area fast so they don’t follow you. some monsters that have a movement boost might be hard to leave behind.

if you want to speed things up, just ignore anything that isn’t an Orange Monster until you get the Items you need.

Pets with Set Affixes are Legend or Eternal Pets. first, look in the Perks. when you kill enough Enslavers, he drops a Legend Pet as a reward. with high Luck & Nadroji Bonus, there is a chance that one of the other Pets he drops normally when killed will drop as a Legend Pet.

these are the Crystals that can be used on a Pet. Calcite (change Items Element), Angelite (add random Normal or Epic Affix), Quartz (remove a random number of affixes from an Item), Diamond (reroll values of all Normal, Epic, Legend, & Crystal Affixes on an Item), Larimar (randomly reroll all Normal & Epic Affixes on an Item), Kyanite (remove one Normal, Epic, Legend, or Set Affix), Sapphire (reroll one Normal or Epic Affix), Fluorite (reroll the value of one Normal or Epic Affix), & Topaz (choose one of six random Epic Affixes to place on an Item). Calcite is the only Crystal that can be used on an Eternal Pet. don’t forget it costs 5 Crystals when using them on a Pet. if it takes 5 attempts to change your Pets Element from Poison to Shock, it would cost you 25 Calcite, 5 attempts x 5 = 25 Calcite.

Mythic Affixes (the Purple ones, like Sureshot & Blood Magic) require a recipe of four Myth Stones. look in Codex > Mythics to see the recipes. if your Recipes only show Question Marks (?), then you need to use, Convert, or Salvage Myth Stones to get the ? replaced by part of the Recipe. the more powerful the Myth Stone used, the better the chance a Recipe is revealed.

to ask questions is to learn how to have more fun with Dungeon Quest!

Thank you so much for the details,
Finally got all nadroji item.
My farming build for main character just finish.
I just need legend pet without element, Already got 4 legend but all of them just element pet. Nothing special with their green affixes on it.
Hopefully can get legend horn with good green affixes.
Just wait my 42/50 enslaver 400+ floor

Once again thank you

I decide to hireling rogue, i want to mix my wizard with this rogue and get max caps for farming because i read that your ( main + hireling / 2 ) on caps right ?
please give me rogue build for farming. Thank you

Luck & Item Drop are averaged between the Main & Hireling. Gold Find & Farm Sets, like Nadroji, just need to be on the Main.

I haven’t used Rogue for a long time, mostly use Wizard. just make a Rogue you like, practice changing the A.I. setting so the Rogue does what you want as much as it can, and go from there. since your Wizard will be a little weak because of all the Farm Affixes, your Rogue will be doing most of the killing, with your Wizard doing combat support.

@yubifreak If you like also, use manashield and reclaim on your wizard, so it can be a li’l be tanky, and your rogue will do most of the killing…

@Golem im on a experiment with manashield and skullshield with crushing flames set and ephipany, and lvl500 is lil bet easy. But i need more improvement.