** “is found from powerful enemys” it means a monster with magic,rare,epic,legend or mythic quality hope this helps

Thanks that’s exactly what I wanted too make sure of

Kill the shrine champion higher chance fo get those 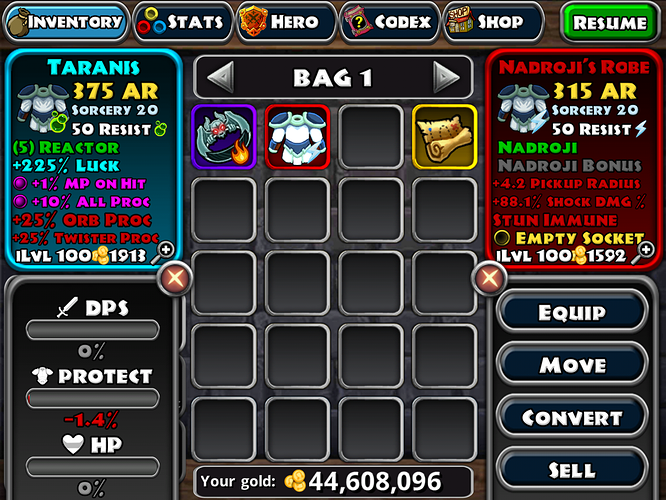 I feel like the old nadroji items are the only ones worth using. The bonus line is a waste of a slot. Anyone else agree?

100% enemy rarity is a huge help especially in map with increased pack size. So, i dont get why it’s a waste.

Yes but I can’t kill everything, break all the props, and pick it up in under a minute and move onto the next map with 2 set affixes 1 being restricted too being on a pet I’d rather clear /hyper/ fast then get the bonus but I will definitely be using this on my build that’s mostly about earning crystals and mythstones as fast as is possible

I feel like the old nadroji items are the only ones worth using. The bonus line is a waste of a slot. Anyone else agree?

I wish I could get just one new Nadroji chest to farm with that dependent affix, and then start getting the old Nadroji chest drops. =)

Does the old ones still drop?

Nope. Luckily i have 5 in my stash to use in case i want. There’s no point to them though because the aetheral robe has ed% and it’s way easier too except for you have to work your way up to floors. Anyway floor 400s to 500s is too easy with simple plagued, poison, fast movement and that. The plagued makes easy billion or so dmg and in packsize that is good. Nadrojis enemy rarity is huge though. Hell even very easy mode can get you an easy aetheral robe.

We can’t get ultra rare legends from the vendor, can we? I thought it’d be nice if I could just gamble some legend chests to get my Nadroji Robe, but that’d be too easy wouldn’t it…